They Called it a Hindutva Hyperbole. Laughed at it. Now this Malice has assumed Gigantic Proportions

by Ramesh Venkatraman
in Opinions
0

The acting Chairperson of the National commission for Women (NCW), Rekha Sharma called out Kerala CM Pinnarayi Vijayan and the Left government in no uncertain terms. (1) She equated his attitude towards the spate of forced conversions of Hindus to Islam in Kerala to that of an Ostrich with its head stuck in the sand – refusing to accept either the reality or the gravity of the problem that has the potential to destroy social order and harmony.

What she referred to as “ Forced Conversions ” came into prominence for the first time in 2009 with allegations of “targeted” and “forced” conversions in Kerala and coastal areas of Karnataka including Mangalore.

It was the Kerala Catholic Bishops council which first raised the issue in 2009 claiming that more than 4,500 Christian girls had been targeted. The Hindu Janajagruti Samiti in Karnataka and the Sree Narayana Dharma Paripalana in Kerala also made similar allegations about the targeting of Hindu girls. Subsequently, there have been a number of reports of forced conversions from other parts of India including Bihar, Maharashtra, Madhya Pradesh, and Uttar Pradesh and also from other parts of the world and specifically Europe (2).

The word Love Jihad is more in vogue nowadays but is not different from, and in fact is synonymous with Forced Conversion.

Love Jihad refers to the specific activity of Muslim boys and men targeting young girls belonging to non-Muslim communities for conversion to Islam by feigning love (2).

The operative word here is ‘feigning love” where the motive is not love but conversion. Viewed from this angle, the term Love Jihad is a misnomer and perhaps Hate Jihad would be a more suitable name to refer to this alleged activity – there is no love involved here. The boy only makes a pretense of love here and traps an unsuspecting Hindu girl knowing fully well from the very beginning that his ultimate goal is the furtherance of Islam and bringing one more “infidel” into the fold of the “one true faith.” In several instances the girl so trapped has been sent to Islamic war zones such as Syria to be abused as a sex slave by the Islamic State of Iraq and Syria (ISIS) (3).

The Akhila-Hadiya (4) case in more ways than one is the first real case that has brought the issue of Love Jihad into the open and confirmed that Love Jihad is indeed a real and present danger. The involvement of the highest court of the land and the premier terror investigation agency the National Investigation Agency (NIA), of the country has shifted what was till now only in the realm of speculation and being dismissed by some as “Hindutva hyperbole” into the realm of a clear and present danger that is not only inimical to the maintenance of social order and peace in the country but is also a danger to non-muslims in general and Hindus in particular. This is a paradigm shift in the narrative around “ Forced Conversions/Love Jihad. ”

Broadly this case has highlighted the following:

The Oxford Handbook of Religious Conversion (6) notes how “Religious conversion has long played a major role in the transformation of people, societies, and cultures worldwide”. It further goes on to add that “…religious leaders from a wide variety of traditions are clearly aware of this and instruct their congregants to create social ties through such techniques as “love bombing” “flirty fishing,” and “favor fishing”…”Therefore “love bombing” and “flirty fishing” are tactics that have been used by the Christian Church too to target local population using the technique of  “feigned love” to target vulnerable teenagers (7), particularly those who have been emotionally or socially rejected by partners, parents, siblings, and peers who would be “easier to convert”

It is just that the tables in a sense have been turned in states like Kerala where the Muslim population has not only targeted Hindu girls but also Christian girls – this irony was on display in all its stark reality when the former Congress CM of Kerala Oomen Chandy informed the state legislature on June 25, 2012 that there were 2,667 recorded cases of young women having been converted to Islam in the state since 2006. One can only speculate on the actual numbers given this “official” confirmation takes into account only “reported and recorded case of forced conversion (8).

IndiaToday in a sting operation showed how Zainaba (9) who is the head of the women’s wing of the Popular Front of India (PFI) was the mastermind behind the conversions of several women. Zainaba a member of the All India Muslim Personal Law Board (AIMPLB) (10) was caught on tape admitting that the sister organization of PFI, Sathya Sarani (11) located in Kerala’s Manjeri district is at the forefront of massive conversions. She further claimed that this organization alone was responsible for more than 5,000 conversions in the last 10 years.

In the same report Ahmed Shareef a founding member of the PFI admits to not only receiving illegal funds but also confirms that the goal of PFI and Sathya Sarani is the establishment of the Islamic State. Frankly, it did not require a sting operation to gather this information. A simple visit to the Sathya Sarani website will remove any doubts with regard to the agenda and the goals. I present below a few screenshots from the site with the relevant portions highlighted to show how pernicious this ideology is. 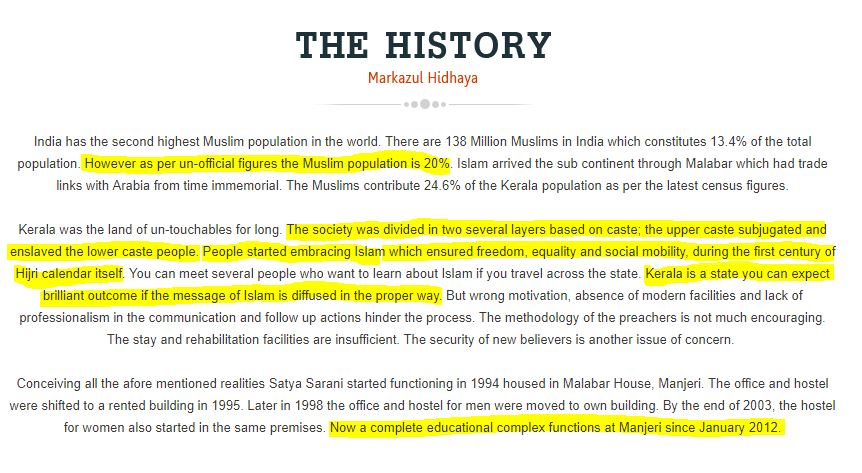 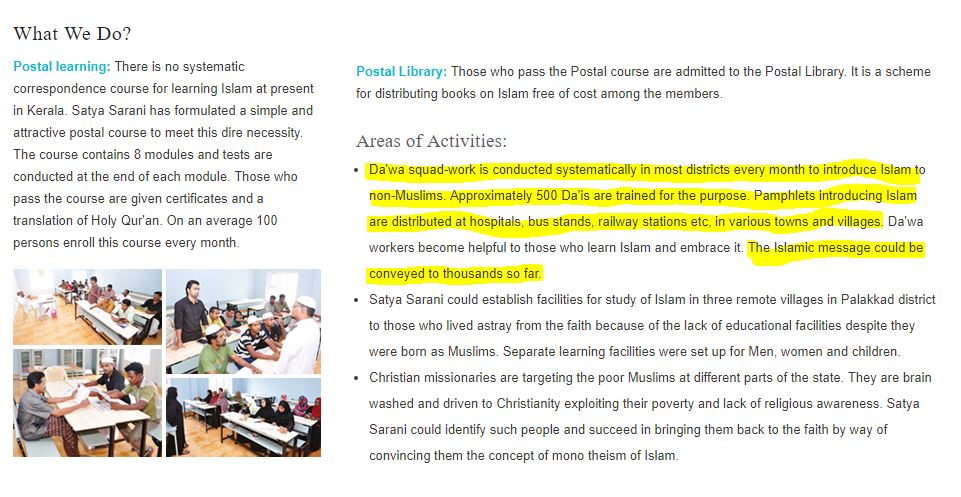 If one were to represent the modus operandi of Forced Conversion and put up a schema based on the evidence available, it would look somewhat like this: 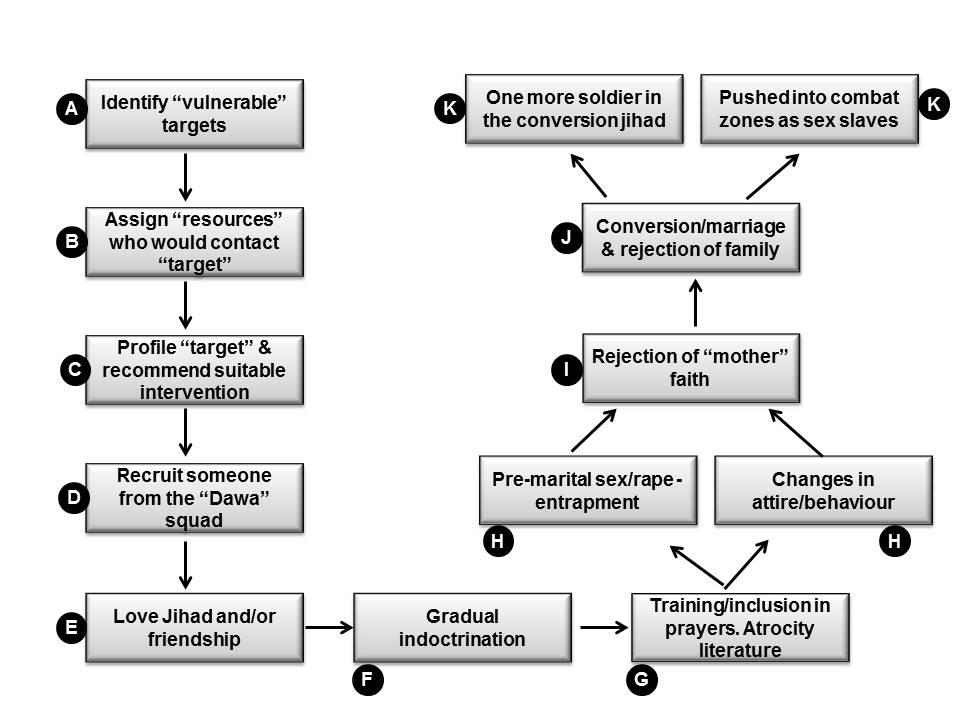 This is the level of organization and planning that has gone into this activity. The table (12)  below shows the number of incidents of Love Jihad, the number cases that were actually registered, and finally the number of cases where the victim was rescued. This is for the period 2006-2009 across 13 districts of Kerala. This is in no way comprehensive and records only those cases that were reported or registered. However, it is an indicator of the gravity of the problem and also a confirmation that Kerala is in the grip of a radicalization and conversion epidemic that can soon spiral out of hand. 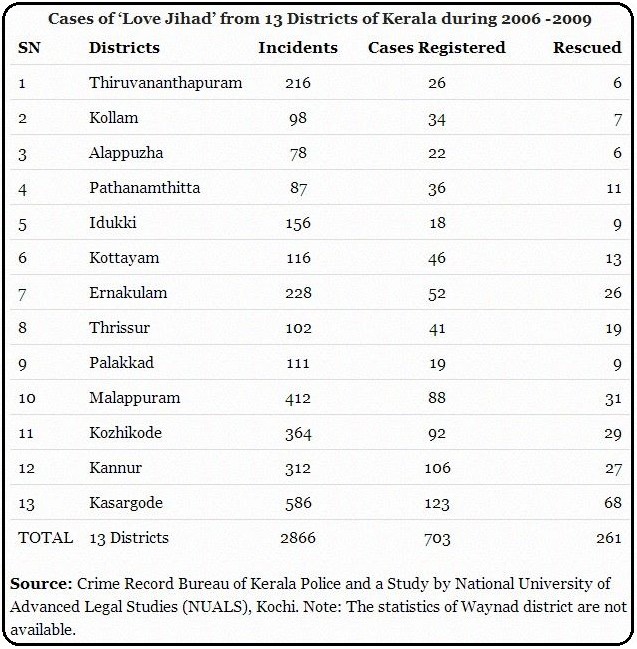 In discussing the way forward one is forced to ask the question as to what the central and state governments are doing in the face of all of this evidence readily available on public platforms. While it is true that the National Investigation Agency (NIA) is investigating the cases of Forced Conversions/Love Jihad, it must be remembered that these investigations are taking place on the basis of a court order and not a government led initiative.

It reflects poorly on the NIA, law-enforcement agencies and the Home Ministry both at the state and central level that organizations that should have been proscribed and the people running such organizations locked up behind bars are instead functioning with impunity and with no care for the consequences. That they display their pernicious wares with no fear of the law should be a cause of great concern for all citizens. It is imperative that the government initiate immediate action against these groups before the issue spirals out of control.

PM Modi Extends His Hands Towards Stalin and Karunanidhi?

Kumar Vishwas was a Misfit in the Aam Aadmi Party, He is all set to be Ousted now!