by Abhishek Mishra
in Opinions
0

NDTV, the news agency popular for its anti-India (Kargil War and Pathankot) misadventures and known to have misrepresented information in the past, has done it once again, but this time NDTV is not responsible.

The issue this time was India’s Bullet Train project, an ambitious project by the Modi Government which has faced backlash from the entire anti-Modi brigade ever since it was announced.

NDTV published a report, last updated on 12 July, 2017, citing China’s first overseas Bullet Train technology export when Thailand approved a $5.5 billion ultra-high speed railway project. The link yesterday was shared yesterday, by one Arvind Jha who goes by the tweet handle @jalajboy, is an entrepreneur and works for the Aam Aadmi Party, He Claimed:

Those who close their minds based on age old biases pay a heavy price. China has 22,000 kms of bullet trains working for decades or more. https://t.co/Cs5ZhKRHXY

The tweet was retweeted by nearly three thousand people, including the Delhi Chief Minister Arvind Kejriwal, who is widely known for endorsing lies and has done it several times in the past. Ex AAP Leader and now a Leader of Delhi based Swarajya India, Prashant Bhushan (who makes a living out of fact-checking/verification and representing them in a court of law), went on to tweet the NDTV report once again, without once, trying to recheck the facts or researching the data. This tweet was retweeted more than 1200 times. Delhi CM retweeted this tweet as well. Seems Kejriwal, once the leader of the lie and rumor spreading brigade has not learned anything from his past, which includes his failed activism against demonetisation, EVM, PM Modi’s Degrees and IB reports on Punjab elections. 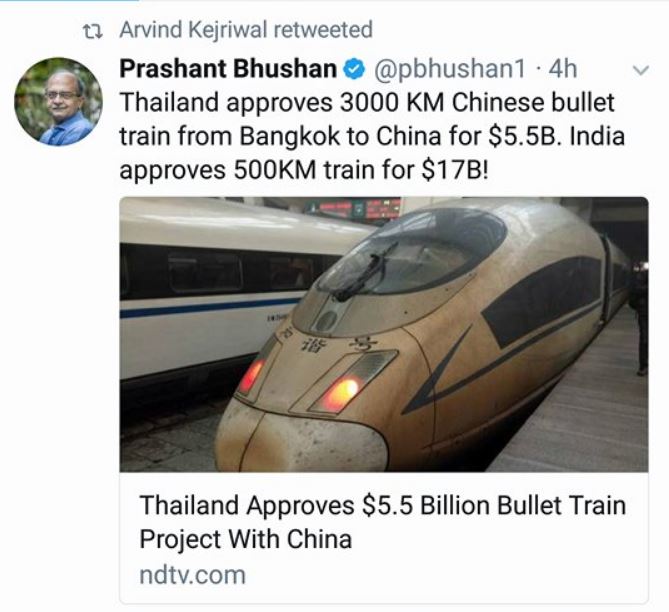 Until 4 pm, 2nd October, the anti-Modi horde, including but not exclusive to, AAP leader Jarnail Singh, disgraced IPS officer Sanjiv Bhatt and Congress leader Sanjay Jha took to social media to spread the fake propaganda of the bullet train pricing. The official account of Asaduddin Owaisi‏ (@asadowaisi) tweeted the rumour too. The other social media handles parading around as neutral news handles also followed suit.

The article that NDTV published had no mention of the length of the Thailand’s Bullet Train Project but misquoted the cost to give an impression that it was the cost of the entire project. The $5.5 billion project was the cost of the first phase of the project, a 256 km stretch and not the entire 3000 km project. Also, everyone would agree that Japan’s technology would be incomparably superior to any other country’s with a unique track record of zero accidents and fatalities.

AAP leader Arvind Jha became the undeniable source of information of the alleged extravagant spending in the bullet train project and his sentiments were echoed by the left-liberal cabal on social media, and propagated religiously by their thousands of followers.

This lie was caught by keen eyes in social media who retorted with facts after researching. We were one of them. The irresponsible actions of a CM of a state is astonishing, but maybe he knows the people are consuming his feed. Another example of playing to the gallery.

How to spread lies pic.twitter.com/bNIHZhOwxK

A weak apology was tweeted by Prashant Bhushan, stating that on further research he found that the cost was for only a 250 kilometer stretch. Arvind Jha, the person who started this propaganda did not offer any apology, but went on to compare the cost of 500 kilometers of Japan versus 500 kilometers of China.

This report here puts the data far more responsibly than NDTV does:

Prashant Bhushan is a lawyer of national repute, Arvind Kejriwal is the CM of Delhi and Asaduddin Owaisi claims to be Barrister-at-Law from England, and the leader of a prominent Muslim Party. If people like these are in power, only God can save this country. This lie was caught. Could there be many other lies, which slipped by, unnoticed?

Read These Gandhi Quotes, And Decide If You Still Wish to Call Him A “Mahatma”