by Yash Joshi
in Geopolitics
0

As Piyush Goyal takes charge of the Railway Ministry in the face of rising train derailments which saw Suresh Prabhu lose his post, Al-Qaeda published an entire magazine on how to derail trains in Europe and America.

“For more than a year this idea has been extensively been researched by a group that has dedicated most of its efforts and time to come-up [sic] with a profound yet simple method in designing this tool.

“So that the Lone Mujahid [someone engaged in jihad] can carry along with him in his fight to bring great destruction upon the West’s security, military and economy — by the Help of Allah.

The magazine further goes on to describe different methods of derailing trains and how to build a “derail tool”. The sheer simplicity in the design and building of the “derail tool” is scary to say the least. Materials needed to build the tool are cardboard, an empty plastic container, part of a rubber tyre, pipes, iron wires, screws, sheet metal, and cement. All of them easily available and their purchase won’t raise any suspicion as compared to bombs which have intricate design and require materials that are not easily available. In addition, the terrorist group goes on to claim that no electronic tools are required for it and their followers can remove any traces of suspicion. When placed on train tracks, the tool is expected to interfere with the train’s movement and cause it to divert from its tracks.
As the perpetrator does not physically need to be on the train during the derailment, the operation “is not a martyrdom op” and “can be repeated,” the magazine said. It will also be “easy to hide your tracks from forensics” after the attack, it boasted.
(http://www.businessinsider.com/alqaeda-published-18-page-g…) 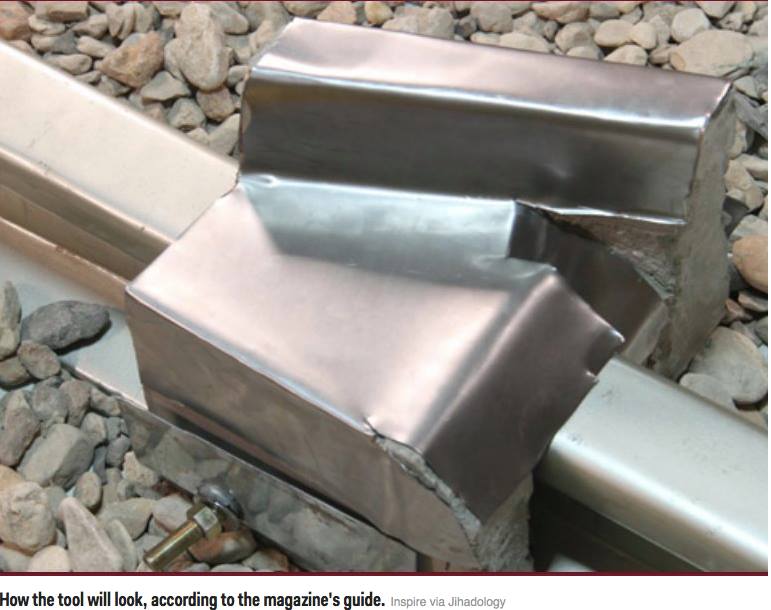 The magazine is specifically designed to reach it’s western followers and although the terrorist group has singled out Britain, America and France as it’s primary targets for executing derailments, India cannot afford to sit back.

If successful, the world will be seeing a complete new form of terrorism which involves minimal risks, which will be hard to detect and prevent and the subsequent devastation caused will be huge. Already, Europe is seeing a new form of terrorism which involves a truck/van mowing down people on the streets. India perhaps will be the most vulnerable of all, if the claims made by Al-Qaeda prove to be true.

There is no denying that the condition of Indian Railways is poor and to expect Suresh Prabhu to work wonders for it in three years was far fetched given that someone like Lalu Prasad Yadav was the Railway Minister not so long ago. But the rising number of derailments meant something or someone had to give in and it’s sad to see Suresh Prabhu go. But were all the train derailments really the fault of the government alone?

The magazine claimed that it’s work was based on research and was being practically tested for over a year. The question arises where and when did the terrorist group test the “derail tool”?

The National Investigation Agency(NIA) filed a chargesheet in July, 2017 which pointed to the role of ISI in an attempt to blow up railway track in Bihar’s Ghorasahan. The chargesheet goes on to expose ISI agent Mohammad Shafi Sheikh and how he roped in Shamshul Hoda from Nepal who in turn roped in another 8 handlers to carry out an IED blast in Ghorasahan. Their main aim was to to blow up passenger trains to cause loss to public life, disrupt essential lines of communication and to thereby cause threat to security and integrity of India.

A similar attack was also planned on Adapur and Nakardei railway stations by the same group. NIA has substantial evidence to prove the role of the same group in the recent trail derailments in UP. NIA in a bid to substantiate it’s claims have attached an audio clip in which the masterminds of the group are heard celebrating the success of sabotaging railway track in Kanpur and Andhra Pradesh. These accidents have claimed lives of 180 people.
(http://www.nia.gov.in/…/…/435_1_PressRelease240720171122.pdf)

Last year in March, Al-Qaeda hacked the Indian Railways website and left a message for the Indian Muslims in a bid to encourage them to join Jihad.

The Indian Railways is a gargantuan operation. It runs 19,000 trains each day, transports 23 million people a day and with 1.3 million workers, is the eighth largest employer in the world. The safety of the tracks lies on 2,00,000 trackmen and it is practically impossible to man every stretch of the rail network.

Train terror is real and India can afford to ignore only on it’s own peril. There is every chance that ISIS and Al-Qaeda will look to strike India through the rail network which happens to be the heart of India’s transportation.

If they succeed, they will bring India’s working middle and lower class to a screeching halt which will in turn claim thousands of lives creating confusion and chaos which will bleed the economy. The government firstly, must iron out it’s own faults in railways or risk exposing itself to the ISIS and Al-Qaeda. Stainless Steel coaches which are said to curb rail accident casualties might be a start.

It’s Official – BJP has stopped being nice to Liars