Arvind Kejriwal is “not scared of jails”. Now we know why

by Shikhar Tripathi
in Politics
0

Satyendra Jain Tihar viral video: Aam Aadmi Party (AAP) is setting up its own dictionary. In their dictionary Aam Aadmi is Khaas Aadmi, Jail is not a place for punishment rather a place for vacation. However, the prominent word in this perverse dictionary is Corruption. Rather than being a sin, it has become a way to draw funds for the party.

An aam aadmi is a person who gets late for the office/school/college due to traffic. Who gets pushed aside in the line for metro or local trains, who has to fight for a seat or a place to stand in public transport on a daily basis. The one who is afraid of the rise of a few rupees in the price of vegetables. Who pays the bill, pays the school fee. Give tax to the government and if an aam aadmi commits some crime, he would be easily punished by the Judiciary.

On the contrary, the new political entrant Aam Aadmi Party has made a mockery of the very word with the alleged privileges and lavishes their leaders have been enjoying. 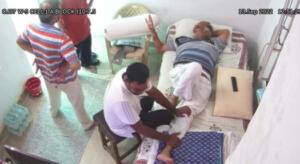 Evidently, a new purported Satyendra Jain Tihar viral video has surfaced on social media, in which the AAP leader Satyendra Jain is having a multi-course meal in his prison cell. 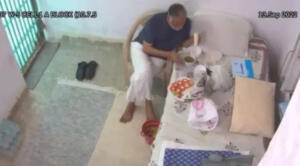 The serious allegations of flaunting the jail rules poses several questions in front of the so-called kattar imandar party. If Aam Aadmi gets this type of facilities in the prison, then why would any Aam Aadmi be afraid of jail or punishment.

To control the damage being done by the CCTV videos, the AAP leader moved to the Delhi special court. In his plea before the court, he requested the court to prohibit media from airing the CCTV videos. Further, his lawyer accused the Enforcement Directorate for leaking the CCTV footage.

His lawyer also defended the arrangements being made in Tihar jail for the AAP leader Satyendra Jain. The lawyer claimed that AAP leader is not getting good food according to his religious faith and has been starving in Tihar jail. He further added that the AAP leader has been fast losing weight and has reduced by 28 kgs. But if that was so, the purported CCTV Satyendra Jain Tihar viral video footage would have vindicated their claim about weight loss.

However, as per reports, facts are completely the opposite. Contrary to the claims being made, the AAP leader has gained weight. The lawyer representing ED, shred the arguments of AAP’s lawyer into pieces. Denying all the allegation, ED advocate Zohaib Hossain added that there was not a single leak from the probe agency.

A cabinet minister who is serving his term in Tihar in the case of Money Laundering is countering everything. His only weapons are lies and false accusations on the central government and the other government agencies. No one would be surprised if on any odd day Tahir Hussian will stand and claim that he is innocent and on even day he will say that the Modi government and police have framed him. Because from time-to-time AAP has used these tactics to defend their flaws.

Also Read: Kejriwal has opened a massage centre in Tihar Jail, and Satyendra Jain is the first customer

The birth of AAP was from the ‘Satyagrah’. When AAP was contesting the Delhi election for the first time, they took an oath against corruption. Kejriwal had also promised that he would bring about very strict laws for everyone, whether he is a politician, government official or any normal person.

But as time went by, the party started showing its true colours. Now, the current scenario is in front of us all to see. The AAP supremo is defending his corrupt ministers and putting all the blame on other parties while the culprit is enjoying a four-course meal and getting a massage in his cell. All these events clearly show the difference between words and actions and the reason why AAP ministers are not scared of jail.

2013, Lily Thomas Vs. Union of India: The case that turned to be a nightmare for corrupt politicians