by Apoorva Shukla
in Politics
0

Jaidev Thackeray joined Shinde camp: Since the rebellion of Eknath Shinde, the most contentious question that has been doing rounds is, what will happen to Balasaheb Thackeray’s Shiv Sena. Will the Shiv Sena remain with Balasaheb’s heir Uddhav Thackeray or will Eknath Shinde snatch the party away?

After the rebellion, the matter to decide on the legacy was in the hands of the Supreme Court of India. The court later directed the Election Commission to decide which faction is the real Shiv Sena, which implies that now the decision will be made as per the ‘Rule of Majority’. In this situation, what impact will Jaidev pledging support to Shinde have on the party, family and the state?

The show of might on the occasion of Dussehra

For the first time in 56 years, after the formation of Shiv Sena, two Dussehra rallies were organised in Mumbai. Since the times of Balasaheb, Shiv Sena has held a Melava (gathering) at Shivaji Park near Dadar in Central Mumbai on the occasion of Vijayadashami. It is like an annual convention, to attend which party workers and supporters from across the state travel to Mumbai.

It is significant as it holds historical advantage for the party. It was in the first Dussehra rally, on October 30, 1999, that Prabodhankar Thackeray said that he is offering his son to the service of Maharashtra.

It was the same rally that became the occasion to show their might for both Shinde as well as Uddhav faction. While both the factions were keen to hold their rally at the said venue, the Bombay High Court granted permission to the Thackeray led faction.

Also read: Uddhav Thackeray is now going to lose the party after losing the state

Although Uddhav retained the iconic Shivaji Park, it is Shinde who seems to be claiming the legacy of Balasaheb Thackeray as well as the Thackeray Family. Maharashtra CM Eknath Shinde held a parallel rally at the Bandra Kurla Complex and the one who joined him on stage was Uddhav’s brother and Balasaheb Thackeray’s middle son Jaidev Thackeray.

At the rally, Jaidev extended support to CM Shinde and said, “I love the ideas put forth by Shinde. I have come here out of love for him.” Jaidev walking onto the stage at such a mega event and greeting Shinde came as a surprise to many as he has kept distance from politics.

What he said was a bigger surprise, “Don’t leave Eknathrao alone, always be with him…let there be Shinde Raj in Maharashtra.” He emphasised on why Maharashtra needs a leader like him.

The politics within the Thackeray family

For the unversed, Balasaheb Thackeray had three sons, Bindumadhav, Jaidev and Uddhav. Bindumadhav died in a car accident in 1996. Jaidev is the middle son, who remained estranged from the family. While Uddhav became the legitimate heir. Jaidev had also moved out of Matoshree citing personal reasons.

Jaidev shared a very complicated relationship with his father and Balasaheb had not even left a farthing for his estranged son. After the demise of Balasaheb, Jaidev had challenged his will in the Bombay HIgh Court. However, he withdrew the suit in 2018.

Jaidev had also alleged Uddhav Thackeray of influencing his father. He also alleged that in 2005 Uddhav conspired to remove his name from the family ration card. 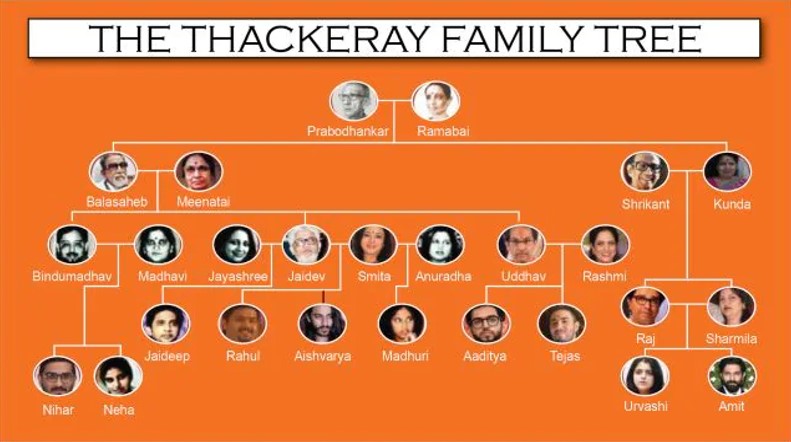 Also read: The Good Thackeray joins the Shinde Camp, and its game over for Uddhav

Uddhav Thackeray is done and dusted

In the first, Eknath Shidne orchestrated a rebellion against the MVA government and brought down the Uddhav empire. He claimed the support of more than 50 Shiv Sena MLAs during his stay in Assam. Currently, 40 Shiv Sena MLAs have supported the Shinde-Fadnavis government in the state. Whereas only around 16 MLAs have stayed with Uddhav Thackeray.

Shinde gracefully gathered the support of all the three units necessary to completely take over the party, the legislative unit, the parliamentary unit and the party cadre.

Now, he is claiming the legacy of his leader Balasaheb Thackeray. He already has many Thackerays in his camp, be it Smita Thackeray or Bindumadhav’s son Nihar Thackeray. Now, with Jaidev supporting the Shinde club, Uddhav Thackeray is all set to lose the family. As now, Thackerays will be in separate factions.