by Apoorva Shukla
in Politics
0

When the current Chief Minister of Maharashtra, Eknath Shinde launched his rebellion against Uddhav Thackeray, what he clearly meant was ‘Tumcha Jagir Nahi Shiv Sena’. That stands actually true, born with a silver spoon within a dynasty is not what should assure anyone of a safe and secure career in politics. The Supreme Court of India is of the same opinion, suggests the recent judgement on the matter.

As Eknath Shinde faction approached the Election Commission of India, asking to recognise his faction as the real Shiv Sena and seeking allocation of the party’s bow-and-arrow poll symbol to them. To counter this, Uddhav Thackeray ran to the highest court of law, the Supreme Court of India, asking to halt the process. However, now the Supreme Court has itself sealed the fate of the Thackeray-led faction.

The Supreme Court on Tuesday has allowed the Election Commission to decide which faction is the real Shiv Sena. Five judge Constitution bench headed by Justice DY Chandrachud refused to stay the proceedings as requested by the Thackeray-led faction.

“We direct that there would be no stay of the proceedings before the Election Commission of India. Accordingly, the Interlocutory Application is dismissed,” the bench stated in its order after a day-long hearing.

The decision gives an edge to the Shinde faction

As per Chief Election Commissioner Rajiv Kumar, the Election Commission will apply the rule of majority, as the Supreme Court has allowed the commission to go ahead with the hearing of CM Eknath Shinde group’s plea. The ‘rule of majority’ is the transparent process through which “real” Shiv Sena will be recognised and the traditional bow and arrow poll symbol will be allocated.

Shinde, when he pulled down the Maha Vikas Aghadi government, had claimed the support of more than 50 MLAs. Currently he has the support of 40 MLAs, who are part of the Shiv Sena (Eknath faction) and BJP government. Whereas only around 16 MLAs have stayed with the Thackeray camp. 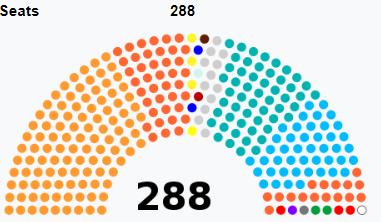 The numbers suggest that the Eknath Shinde faction will easily prove majority before the election commission panel and not only save himself and his MLAs from the sword of disqualification under the anti-defection law, but will also appropriate the “real” Shiv Sena with himself. Thus, BalaSaheb Thackeray’s Shiv Sena remains with a real Shiv Sainik.

Supreme Court and Shinde together seal the fate of Uddhav Thackeray

If anyone analyses the chronology of how things unfolded, then they can easily understand that Shidne’s aim was not just to bring down the unholy MVA government but also sealing Uddhav Thackeray’s fate.

As soon as Shinde planned a rebellion, his first step was to gather support of the elected Shiv Sena representatives as it was the only way to duck the anti-defection law.

Anti-Defection law becomes null and void if the breakaway faction has the strength of the ⅔ rd majority of the total. Shinde managed to gather support as Udhhav’s ‘secular’ politics had already irked the core Shiv Sainiks.

Eknath Shinde faction threw party supremo Uddhav Thackeray for betraying the Hindutva ideology of Balasaheb’s Shiv Sena. Now, Shinde has singular focus on taking over the party completely. For this, it was necessary that Shinde enjoys firm grip over three wings- the party organisation, the legislative unit and the parliamentary unit.

Shinde began with the legislative unit and was successful. Then he acted on gaining the support of the parliamentary unit. In July, 12 out of 19 MPS of Shiv Sena submitted a letter to the Lok Sabha speaker OM Birla. The same group recognised them as the real Shiv Sena with south central Mumbai MP Rahul Shewale as its leader and Washim MP Bhavana Gawali as its chief whip. Both these leaders owe allegiance to Shinde.

Shinde’s next aim was to organise the party. Shiv Sena like any other party is governed as per the set hierarchy. When Uddhav Thackeray was busy protecting its MLAs, Eknath Shidne not only took oath as the CM of the state, but his men also brought maximum people of the party organisation to their side. And leaders like Ramdas Kadam, Sharad Ponkshe and Anandrao Adsul supporting the Shinde faction are examples for the same.

Uddhav Thackeray has already lost the party, the legislative unit and parliamentary unit. Now, he will also lose the traditional bow and arrow symbol to CM Eknath Shidne. Thus, the Supreme Court has sealed the fate of the Uddhav Thackeray scion, with no hopes left for another dynast Aditya Thackeray.