by Tejasvi Malhotra
in Geopolitics, Trending
0

One by one, the Xi Jinping controlled administration is staring at different nations, with an intention to colonize it. The paper dragon is continuously attempting to paralyze economies through its ill attempts. From Srilanka to Nepal, China is on the spree of watching economies crumble. And this time again, Nepal is at the target of the communist nation.

Nations after nation, economies are experiencing a hard time with China. The communist nations’ masquerading tactics are slowly and gradually leading the countries in utter despair. The recent example can be Srilanka. China’s tactic of offering lolly-pop to nations and further transforming it to their benefit is now at the door of Nepal.

Chinese aircrafts to Nepal are under rust

In a recent report it was revealed that the Chinese products are causing a hard time for Nepal. A batch of Chinese aircrafts that Nepal had imported earlier are at a stand- still for more than two years now and just gathering rust over it. These aircrafts were initially imported with an intention of flying on unnerved sectors and earning revenue for the ailing Nepal Airlines Corporation.

In reality, these Chinese planes which first arrived in the year 2014, cost more money to operate than they were actually purchased for. Due to this, the Nepali airlines are now suffering losses. Further, the corporation’s board decided to send these aircrafts in deep storage in the aftermath of their non- functioning.

The five planes includes three 17 seater Y12e aircraft and two 56 seater MA60 aircraft. These are now parked at the Tribhuvan International Airport in Kathmandu. Another one crashed in Nepalgunj and thus is under unflyable condition. Moreover, according to a senior Nepal airlines captain, “these planes are susceptible to corrosion.”

Concentrating on the background of these aircrafts, in the year 2012, Nepal Airlines signed a pact with the Chinese Aviation Industry Corporation, to purchase six aircraft including, two MA60 and four Y12e. For this, Beijing extended assistance worth Nepali Rupee 6.67 billion. Out of which, Rs 2.94 billion was utilized for one MA60 and one Y12e aircraft. Apart from this, the other aircraft was purchased with a loan provided by China’s EXIM Bank.

Meanwhile, China also assisted Nepal with Rs. 15 billion for investing in various other projects in the Himalayan region. This came after the Nepali foreign minister Narayan Khadka held wide-ranging talks with his Chinese counterpart Wang Yi, during his China visit. The Chinese side also assured that Beijing will soon start the construction work of the second phase of Kathmandu Ring Road Improvement Project.

To put it simply, China is rigorously moving ahead with the sole intention of swallowing economies. Whether it’s about strengthening financial assistance or providing aircrafts, the paper dragon is just concentrated in its browbeating legacy. From Srilanka to Nepal, it has presented the same gritty tactic.

China’s strategic inclination towards Nepal is evident through its incessant infrastructure and energy projects. This included the West Seti Dam, the Pokhara Airport and Upper Trishuli hydropower project, among others. During the first half of 2020-21, Chinese investors pledged direct investments into Nepal worth Rs. 18.11 billion. This simply means that Chinese investors are keen to inject their capital even during the COVID-19 pandemic.

As per a 2016 report of Economic Times, China provided a $210 million soft loan to Nepal to construct a regional airport in Pokhara as part of the country’s efforts to develop its aviation sector.

Through these tactics, the communist nation rigorously influences the Himalayan nation to encircle it in a cycle of debt trap. In the aftermath of alluring Nepal with its huge sway of investments, China further tried to paralyze it.

According to a report in June, China closed its border with Nepal under the pretext of COVID-19. Despite Nepali entrepreneurs’ request to open the border, China continued to impose an undeclared blockade on Nepal by obstructing the import of goods at the Tatopani and Kerrung checkpoints. It harnessed the Nepali entrepreneurs to conduct their business activities, resulting in weakening of the Nepali economy.

The continuous ill attempts of China

It’s not the first time that China is exemplifying its shitty maneuvering. Countries are majorly concentrated under the Chinese debt trap. Djibouti, Laos, Cambodia, Kyrgyzstan, Maldives, Bangladesh, Srilanka, among others, are suffering from dangerous numbers of Chinese debt. 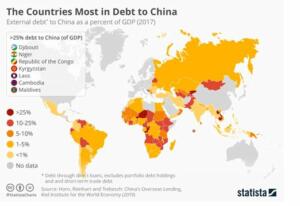 Not just this, according to a research published by the Kiel Institute for World Economy, there are seven countries in the world whose external loan debt to China surpasses 25 percent of their GDP. And this shows the Chinese ill minded attempts to hinder nations across the world.

The communist nation presented the same maneuvering in Srilanka. It extended billions of dollars of loans to the island nation, leaving Srilanka under immense growing debt. To put it simply, in the alluring of increased investment, Srilanka itself gave the paper dragon an opportunity to drag it under ruins.

China’s well known philosophy of promising something and performing something else has not even left Bangladesh aside. In reality, through its ‘Metro Rail Network’ initiative in Chittagong, China is attempting to establish itself in Bangladesh. The main target of the communist nation is the Chittagong port which carries a major significance as most of the import and export activities are carried out from this port.

Interestingly, the Chinese ally of Pakistan is also under this debt ambit. China is Pakistan’s largest bilateral creditor, with outstanding loans of $14.5 billion. Additionally, Pakistan also owes $8.77 billion to commercial banks, which includes three Chinese lenders as well. In the wake of harming India, Pakistan is blind foldedly joining hands with the communist nation. However, shaking India is neither a cup of tea for the terrorist nation nor for the paper dragon.

India is clearing up the China menace

It’s a long historic legacy of China to initially act as an ally for nations by strengthening its financial assistance and then inject its venom of capturing countries. Provably, it’s because China is under a dilapidated pressure to prove itself as a superpower, however, which is unlikely to happen. Nevertheless, India is right here under the leadership of Prime Minister Narendra Modi to curb the strategic menace caused by China in the neighboring countries.

From providing financial assistance to Srilanka during its nationwide crisis to developing road, rail, health, education, and power initiatives, India is continuously providing its all possible assistance to the suffering nations worldwide. Unlike China, the world’s largest democracy is trying to clear out the menace caused by the paper dragon and simultaneously trying to stabilize economies.

With each passing day, the Chinese tactics are proving to be a dent on worldwide economies. However, India is all set to squeeze the dragon and establish the Indian regime of supremacy.