by Apoorva Shukla
in Trending
0

The controversy surrounding Lucknow’s recently inaugurated Lulu Mall just refuses to die down, as the left-liberal cabal is constantly fuelling the controversy to pull their agenda, the agenda of ‘Muslim victimhood’ and ‘Hindu radicalism’. However, time and again, the cabal has exposed themselves.

Misinformation: A tool for Islamists and liberals

It was widely propagated through different social media platforms that, ‘The Lucknow Police has arrested Hindus for offering Namaz at Lulu mall’. The flag bearers of the left-liberal cabal began maligning the Hindu community and spearheaded a hate campaign against Hindus.

The case was that the Lucknow Police arrested four men in connection with the recent Namaz controversy, namely Saroj Nath Yogi, Krishna Kumar Pathak, Gaurav Goswami and Arshad Ali. The press note of the same was published by the Lucknow Police on the micro-blogging platform Twitter.

Fake news peddlers got to work in no time

This happened to be an opportunity for the likes of Arfa Khanum Sherwani and RJ Syema to malign the Hindu community. Sherwani wrote on Twitter that actually ‘Sanghis’ were arrested for offering namaz inside the Lucknow Lulu mall. 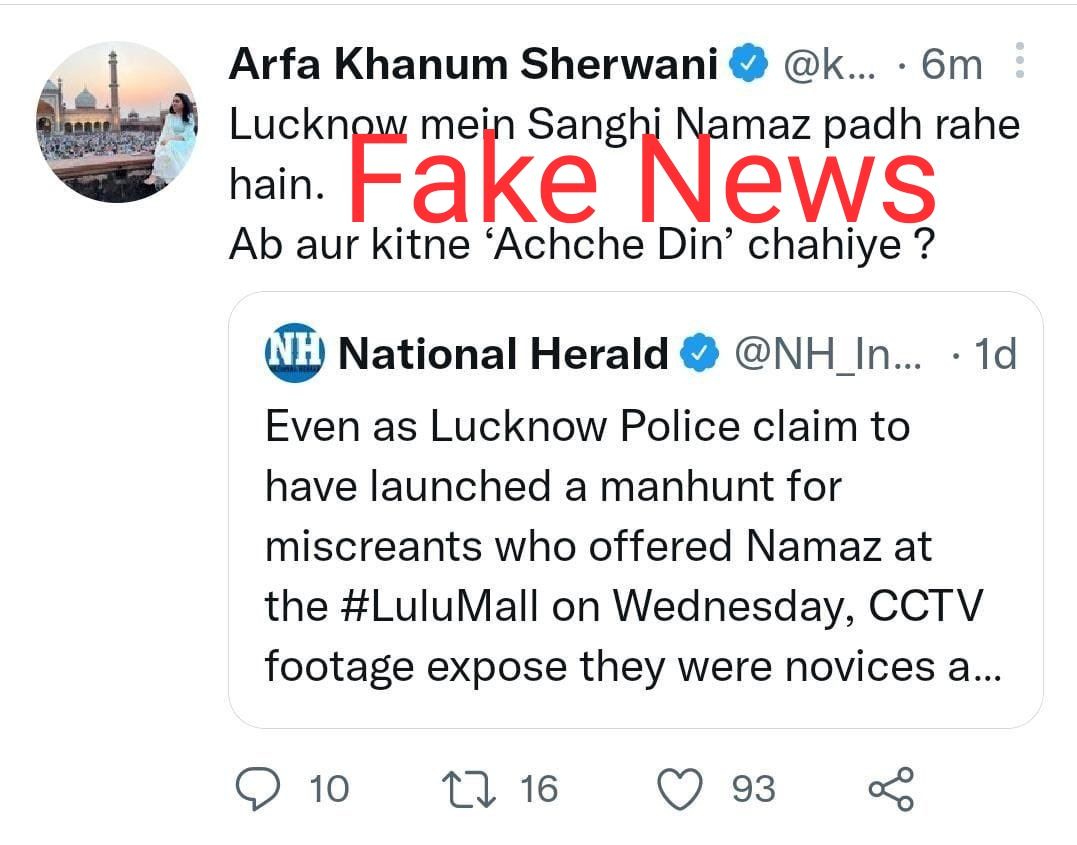 She was then joined by her colleague, Rohini Singh who is also in the business of peddling fake news. Doing her job, Singh tweeted that the ones reading ‘Namaz’ on the mall premises were actually actors, who wanted to create social unrest. RJ Syema too did not waste a second and came to bolster Islamic propaganda. She quoted Twitter user Khabeer’s tweet and promoted misinformation that Hindu men posed as Muslims to offer namaz inside the Lulu mall. 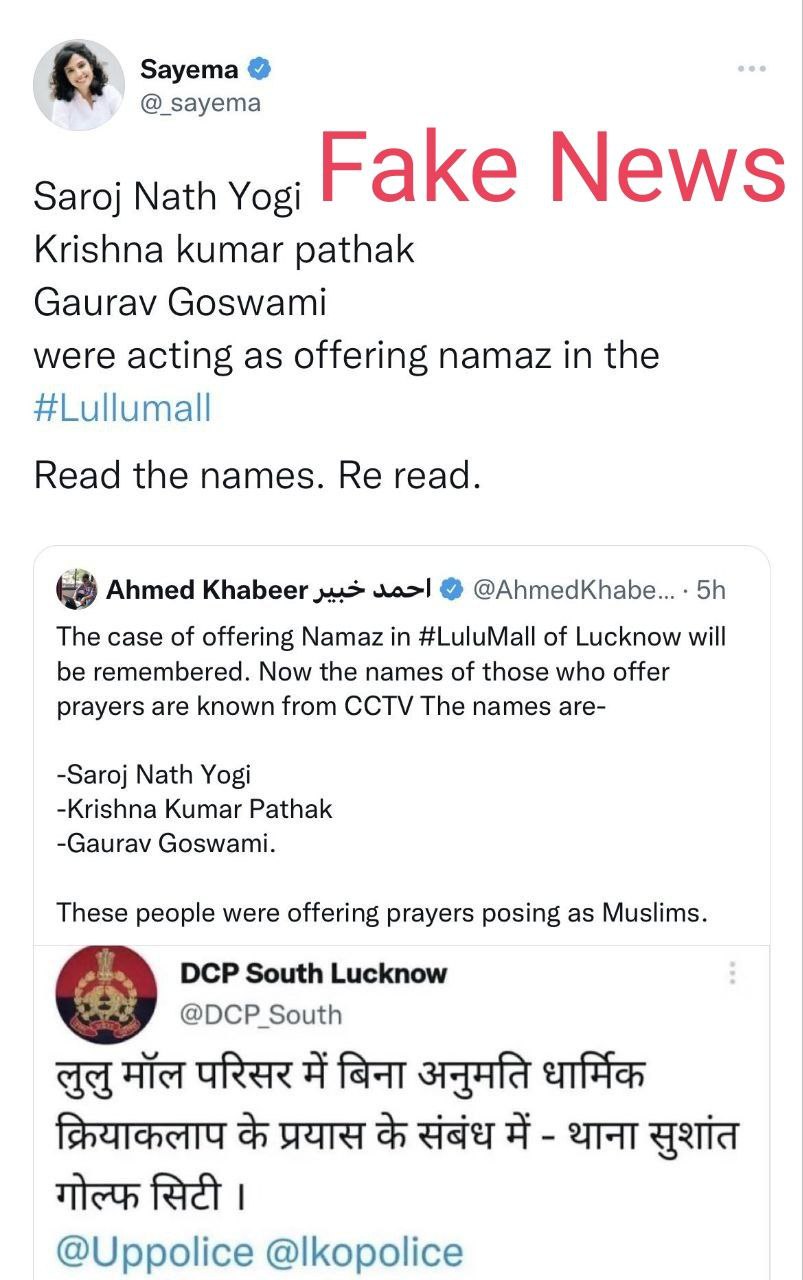 However, the fake news peddlers soon came to a halt after Lucknow Police decided to counter their Islamo-leftist agenda. The Lucknow Police on Friday, July 15, issued a press note, where it mentioned that four people have been arrested for trying to disrupt religious harmony in the Lulu Mall. The press note identified the four as, Saroj Nath Yogi, Krishna Kumar Pathak, Gaurav Goswami and Arshad Ali. The same press note was circulated all over social media claiming that the people involved in offering Namaz were Hindus posing as Muslims.

Read More: Lulu Mall Controversy: There’s much more to it

On Monday, July 18, the Lucknow Police issued another press note on Twitter in order to clarify that the arrests made earlier were in a separate incident. Those were arrested for reciting Hanuman Chalisa within the mall premises without permission.

The ones arrested for offering Namaz are identified as Mohammed Rehan, Aatif Khan, Mohammad Lokman and Mohammad Noman, all of whom are residents of Lucknow. 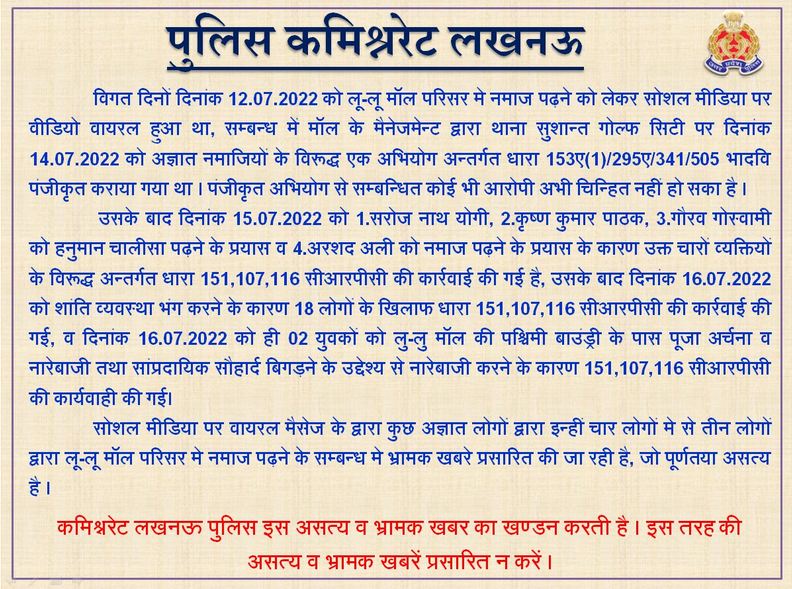 The aforementioned is one of the incidences concerning Lulu Mall. Since its inauguration, the mall has courted controversy. The Lulu Mall first courted controversy after a video went viral in which a few men can be seen offering Namaz within the premises of the recently inaugurated mall. After which, the Akhil Bhartiya Hindu Mahasabha issued a warning saying that the organisation would hold a protest and recite Sundar Kand if Namaz is offered again in the mall. Adding to that, the mall administration has put up notices at several places within the premises stating that religious prayers would not be permitted, reported Hindustan Times. CM Yogi Adityanath has also called for strict action over “unnecessary remarks and demonstrations”.

Bailing Zubair out was expected, but what was the need to disband the SIT?