Why did cosmetic giant Revlon fail?

by Abhishek Kumar Singh
in Analysis
0

Change is the only static abstraction in the world. That is truer for female’s choices. Case in point, female mate selection is the  most brutal evolutionary force in the world. A part of this harshness has now transferred to private companies. Revlon, a legend of the cosmetics industry is the latest victim of it. Read here why Revlon announces bankruptcy?

Saddled under debt and not having enough clout in the hearts of 21st century empowered women have forced Revlon to file for bankruptcy. The lipstick and nail polish brand effectively said that Company is unable to fund the increased cost of supply chain crisis caused due to covid-19 pandemic. Debra Pereleman, Chief Executive Officer (CEO) and President of Revlon said, “Our challenging capital structure has limited our ability to navigate macro-economic issues in order to meet this demand,”

The protection provided to the Revlon company by Chapter 11 of the US bankruptcy regime will allow Revlon to organise its existing capital in an efficient manner. The brand is hopeful of receiving $575 million in debtor-in-possession financing from its existing lenders. With this hefty sum, Company is planning to address a part of its $3.7 billion debt. Revlon is so neck deep in debt that it did not even have money to support day-to-day operations.

Though, it was anticipated, but the way in which Revlon has crumbled in a short span of times raised a lot of eyebrows. That is why it becomes imminent to investigate the reasons behind its downfall.

Revlon was founded in 1932 by Joseph Revson, Charles Revson and Charles Lachman. Charles is believed to be the main contributing force behind the idea. The letter L in Revlon is attributed to Charles Lachman, who provided Chemical analysis behind the idea. The company first started selling nail enamel. 5 years down the line, the Company was selling nail polishes in department stores and pharmacies. That skyrocketed its revenue, and it became one of the most successful multi-million Dollars company in the post Great depression world.

During Second World War, Revlon expanded its product line to manicure and lipstick. It served the US Armed Forces as well. By the end of the war, Revlon was second best cosmetic producer in the world. It started expanding its business outside US and set up bases in 150 countries over the years. Now the company was not a buyer of manufactured products, it was instead producing them.

Feminism and Corporations fuelled its rise

For the next 3 and half decades, Revlon dominated the market. As the modern feminism conspired with big companies to take advantage of women’s orderliness and other good qualities, they started to notice that their women employees are unhappy about their grooming. The primary reason behind it was that women used to straddle for long hours, which left them virtually no time for natural grooming.

Multinationals created the demand for better looks and Revlon jumped in. It posed the question, “what makes a woman unforgettable”? According to the Wall Street Journal as well as Revlon, the answer to the aforementioned question was Revlon.

The company launched make up products which made women cover their corporate bruises. To promote itself, the Company launched an aggressive brand promoting campaign involving famous models of the time. It even tried to take the advantage of newly evolved revolution against apartheid by roping in a black model named Naomi Sims in 1970.

Expansion did not help its cause

By the beginning of 1970s, Revlon had expanded itself in pharmaceuticals and apparels as well. But the expansionist approach did not bode well. It turned out to be fatal decision to expand. Company’s operations’ team had now too much on the table and their attention span got shortened. After clocking sales worth $1 billion in 1976, it started to flatten. By the beginning of 1980s, other competitors entered the market.  Revlon’s sales started to witness downscaling as well.

One of the big reasons why Revlon sales started to fall was that women were now looking for more natural looking make-ups. But, Revlon did not innovate according to changing needs.  By then, Charles Revson had left for his heavenly abode and the company was in doldrums under the new CEO of European descent.

1980s was probably the worst time for any company to witness decline in its fortunes. The decade of hostile takeovers did not spare Revlon as well, and in 1985, Ron Perelman became the chairman and controlling shareholder of Revlon. Ron took the marketing campaign to new levels, roping in supermodels of the era Christy Turlington and Cindy Crawford among others. But, the campaigns fail to catch the eyeballs.

Due to paying out debts of Revlon group, Ron’s venture to buy out men’s grooming company GILLETTE expired. Proctor & Gamble, its main competitor, was now way ahead of it and by 1990, its share in US Cosmetic market was 1.7 times that of Revlon’s. 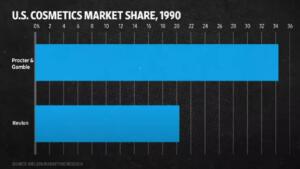 Revlon decided to launch a counteroffensive strike. It launched more and more products in the market. During initial 1990s, more than 3000 diverse Revlon products were in the market. But, women were continuously refusing to apply cosmetics which were at least 2-decades old in terms of fashion sense. They desired more natural and Revlon was getting more artificial.

The company tried to resurrect itself with the help of public by asking for money in exchange of shares. In early 1996, it launched itself on New York Stock exchange. Even that proved to be a failure which was confirmed in 2003. 2003 was the year, in which it registered sixteen straight quarters of losses. On the eve of 2008 financial crisis, Revlon shares of cosmetic markets had fallen to 11 per cent.

Perelman got more aggressive and went on to acquiesce Elizabeth Arden, a makeup, skin-care, Perfume and Gifts brand and the Perfume brand Jean Nate. But, they still could not resurrect. By 2017, its market share had almost halved compared to 2007. New companies like L’Oreal and Kylie Jenner’s Kylie Cosmetics had got the ball rolling.

The last nail in the coffin was inserted by Revlon’s internal performance mechanism. Its newly formulated Enterprise Resource Planning (ERP) to improve efficiency in the company never got going and the company was so disorganised that it found it tough to even submit its regulatory filing to U.S. Security and Exchange Commission.

As the company was struggling to maintain itself, uninvited and out of control factors like Covid-19 and Ukraine-Russia crisis further exacerbated the troubles for the cosmetic giant. Worldwide, consumer goods companies started to struggle with shortage of key materials. Constant push to avail it further increased the input cost leading to extraordinary demand in final price. At the end of all this, Revlon was in for a loss as in the wake of declining buying capacity of consumers, its products started to return from shelves.

The Revlon Company had no other option than to declare Bankruptcy. It was the last option left for it. Let’s hope the new investors in the company are able to strike chords with the employees and chalk out the desired change which Revlon failed to manifest for the last 4 decades.

Government shouldn’t have removed Mughal references from NCERT books, it should have published the truth