HOME » Politics » Trending » Modi@8:The achievements of the Ministry of Youth Affairs and Sports under PM Modi

Modi@8:The achievements of the Ministry of Youth Affairs and Sports under PM Modi

India’s population is 1.35 billion. The humongous population is blessed with the tradition of physical activity passed to them by their ancestors. Moreover, 104 million tribal population (2011 Census) meant that Indians should be winning more and more medals over the years. The tribal population is supposed to be more in touch with physical labour than the average globetrotter in the concrete jungles of the cities.

In spite of so much richness, we could not get to our full potential. The missing link between potential and medals was a synchronised effort by the Ministry of Youth Affairs and Sports (MYAS) and sports authorities. PM Modi arrived, he saw the gap, and asked his MYAS to bridge it. And the Ministry did it in atremendous fashion.

India has more than 100 sports facilities designed to cater to international level sporting events. However, most of them were running in a dilapidated state. If you would visit any SAI centre before 2014, there was a higher chance of you meeting with a bovine animal than finding an athlete engaged in his/her practice. Nothing against bovines, but there is a place for everything and that place should have been reserved for players.

Under the National Sports Policy, 2014, MYAS promoted the development of adequate sporting infrastructures across the country. Through the Urban Sports Infrastructure Scheme (USIS) and Panchayati Yuva Krida Aur Khel Abhiyan (PYKKA) Scheme, efficient infrastructures on local levels were laid out. Giving more teeth to the SAI Training Centre Scheme (STC) along with the Come and Play Scheme opened the gates for the renovation of SAI centres.

Since sports are a state subject, Union governments have little power to improve infrastructure. However, through revised programmes, MYAS involved private players which led to an increase in the in-house training and coaching facilities. Currently, Rs 9,069 crore is being spent on developing sports-related infrastructure under the National Infrastructure pipeline (NIP). Major Dhyan Chand Sports University, having been built at the cost of Rs 700 crore in Meerut is another shining jewel in India’s sports infrastructure brochure.

Moreover, to encourage sports culture, MYAS contributed to the Smart City Mission as well. Cities are being encouraged to take up organisation of a mega sports event, something which is considered below their capacity. This would help in the sudden increase in efficient transportation and telecommunication systems serving the designated sports facilities. These facilities will give a sudden upshoot to their infrastructure which will be sustained and upgraded according to future needs.

MYAS launched schemes specifically designed to promote athleticism in the country. Under Khelo India, 1000 young athletes are chosen every year. For the next 8 years, they are provided with Rs 5 lakh per year scholarships. It has also taken 20 Universities and 200 million children in the age group of 10-18 under its fold. Gender equality and social inclusiveness are the main focus of this scheme as it aspires to create a fit population ready to take up extreme sports challenges. At the same time, through University involvement, they will have a backup plan in case their sports career goes haywire.

Similarly, to increase India’s Olympic prospects, MYAS launched the TOPS Scheme. Under this scheme, each candidate having promising talent is provided training (including foreign), equipment, and a coaching camp among others. Besides these benefits, a monthly stipend of Rs 50,000 is being provided to them. Over the years, the government has spent Rs 1,200 crore on athletes according to the Sports Authority of India (SAI). This spending involves spending on Annual Calendar for Training and Competition (ACTC) as well. In fact, in the Tokyo Olympics, all 54 athletes were part of TOPS and the government rallied behind them, leaving no stone unturned for their success.

Moreover, to find worthy players, initiatives such as Sports Talent Search Portal, National Sports Award Scheme and other initiatives were launched. Riding on the encouragement through the aforementioned schemes, India returned with 7 medals from the Tokyo Olympics.

All round development of all sports

Before 2014, Cricket was the dominating theme of Indian sports. No matter how much they tried, other sports just could not get the required support from the government. Things started to change under Sarbanand Sonowal as the MYAS started to witness a shift in its approach. But, it took some time to improve the mindset of bureaucrats handling MYAS. Until then, Budget allocation for MYAS did not increase by a substantial amount.

Soon, the system was in place. Various schemes like Khelo India, and TOPS among others were announced. Not one scheme differentiated athletes based on their skills. Whether you are using a Tennis or Badminton racket, MYAS facilitates equal treatment. As soon as it was ensured that every sport would be given equal treatment, the budget allocation was put in place. Over the years, India’s cumulative sports budget as well as allocation to different institutions rose by remarkable margins. 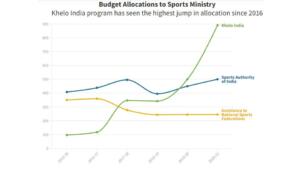 On the back of renewed focus on their respective sports, the country knows that Virat Kohli is not the only star of Indian sports. Today Sakshi Malik, Phogat sisters, Neeraj Chopra, Nikhat Zareen, Lakshay Sen, PV Sandhu, and Deepak Punia among others are dominating the Indian sports spectrum. Their individual fame is a reflection of the growth their respective sports have made during the last 8 years.

You may provide funding, you may provide infrastructure, and you may provide political will. However, to effectively execute any plan, a proper managerial structure is required. This is what was lacking in sporting bodies. Their financial and other problems were exacerbated by corruption and other irregularities at the top level, which further used to percolate to the bottom.

Under the Modi government, respective sports ministers took a top-down approach to strengthen the functioning of sporting bodies. Under Vijay Goel, an Empowered Steering Committee (ESC) was formed in January 2017. It was tasked with preparing an action plan for India’s success in the next 3 Olympic Games. To increase women’s participation in sports, MYAS formed a special committee to solve their grievances.

Leaders were constantly in touch with athletes

Sports is ruthless, it’s brutal, either you perform or perish. If you win you are a hero, if you perish, no one gives a damn about you. This used to be the norm in the pre-2014 era. Post-2014, players were given their deserved respect. The introduction of an Olympic medallist (Rajyavardhan Singh Rathore) in MYAS proved to be vital in changing the attitude. Ministers started to listen to the grievances of players and stayed with them during their ups and downs.

MYAS roped in PM Modi as well. Time and again PM Modi conveyed to them that the whole nation is with them. His phone calls to Neeraj Chopra and the Hockey team are still a fresh event for us Indians. He is someone who fulfils his promise made to individual players as well. PM Modi had promised P V Sandhu that he would be eating ice cream with her and after she returned from Tokyo, PM Modi invited her for an ice cream session. Whenever a team or player shows exhilarating resolve, PM Modi is right there to congratulate them, no matter whether they lost or won.

Sports are an evolved necessity of the human body. But, professional sports are a different game altogether. You have to act like a ruthless animal while competing, and come out as a decent human after the competition. This monkey balance takes a tremendous toll on the body and mind. That’s where intervention by MYAS is making the difference. Under Anurag Thakur, Indian sports sector is in safe hands.

Ram Chandra Kak – The man who could’ve been Kashmir’s hero, but chose to be the villain