Modi@8: The achievements of the Finance Ministry under PM Modi

Try to take your mind to March 2014. Just before the election, few words used to dominate newspapers covering economic and financial affairs. It was called policy paralysis. The UPA government just could not find a way to keep the economy moving. When PM Modi sat on the challenging chair of Prime Minister, the natural expectation was to turn things in a whip. He and Ministry of Finance did turn the tables, but slowly and steadily, invigorating every section one by one.

When Late Shri Arun Jaitley took oath as Minister of Finance in 2014, very few people had bank accounts. Only 40 percent of Indians had the privilege of having a bank account. This made it impossible for people to save. In big banks, the cost of keeping money was so high that normal people could not afford it.

On August 28, 2014 the Ministry of Finance launched Jan Dhan Yojana which allowed anyone above 18 years of age to open a bank account. By the end of year, 53 percent Indians had personal bank accounts. The number jumped to 80 percent by the end of 2017 and it is increasing further in spite of Covid hurdle. Women, the less educated and people out of the labour force were the biggest beneficiaries. As of April 2022, Indian banks have liquidity of 1.7 trillion INR only on the back of Jan Dhan Accounts.

Connecting Aadhar and Mobile to it provided it with another layer of teeth. Now these accounts have become a playing ground for elimination of corruption. Money released by respective governments now directly reaches beneficiaries’ bank accounts. People are now receiving payments of MGNREGA, crop insurance, PM Awas Yojana, crop insurance among others in their own bank accounts.

Implementation of Goods and Service tax

Right from the beginning, no tax system including VAT proved to be effective for India. In 2002, Vajpayee government appointed Vijay Kelkar Committee to suggest a transformative tax structure. It submitted its report in 2005, advocating for implementation of GST. But, Congress could never gather political will to implement it.

It was Arun Jaitley who led the initiative of implementing GST. He ran from pillar to post, sat with opposition leaders, heard them and solved their concerns. Jaitley even took the political red-pill of crediting opposition as well. After a vigorous 3 years effort, Jaitley was able to get required numbers on board for a Constitutional amendment bill.

The fact that GST subsumed central excise duty, services tax, additional customs duty, surcharges, state-level value added tax and octroi, and streamlined the tax rates. This made it easier for businesses to pay taxes. It is reflected in the government’s tax revenue as well. Official RBI data says that over the last 5 years (GST was implemented in 2017), both Direct and Indirect revenues of both Central and state governments have witnessed an unrealistic spike.

Read more: GST hits another record high, but it will reach its full potential only when liquor and petroleum are included in it

Though Paytm was launched way back in early 2010s, its use remained subdued due to less internet penetration. That’s when Demonetisation happened. The lack of ample cash for a few days made people adapt to digital payment. People then found digital payment easier than paying cash.

The Ministry of Finance and RBI then opened the floodgates. BHIM and UPI became instant hits among masses. Today, people prefer to pay for even their groceries in digital payment mode. After Covid pandemic hit our supply chain, use of UPI has seen a phenomenon rise. It touched its highest number of transactions in April 2022 with 558 crore total transactions, a 3 percent rise over March, 2022. More than 316 banks are now available on the platform.

The payment infrastructure paved the way for the fintech industry to flourish. In the last few years, India has emerged as a global leader in the (fintech) sector. The country has the highest fintech adoption rate in the world and it is the second-highest funded sector. India has the world’s third-largest fintech start-up ecosystem globally. India has overtaken China as Asia’s top Fintech funding target market with investments of around $7.1 billion (from January 2019 till the first half of 2021) across 375 deals. Up until now, the sector has produced 17 unicorns. Within the next 1000 days, the total value of country’s digital economy is expected to touch the $1trillion mark.

Read more: As China cracks down on its Tech sector, India outlines a 1000-day plan to make the country a $1 Trillion digital economy

Earlier, exit from the business was one of the most tedious things to do, thanks to socialist business laws which were the hallmark of previous governments. These laws helped in creating large non performing assets or NPAs, which was the largest problem faced by the Indian government and Reserve Bank of India in the previous decade.

Read more: How the Insolvency and Bankruptcy Code has helped India reduce its Non Performing Assets 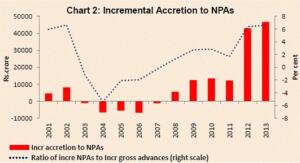 With Insolvency and Bankruptcy Code (IBC), the Ministry of Finance hit two shots with one arrow. IBC made it easier for businesses to get out of the unprofitable venture before the loss becomes too large. It also ensured that the lender (Banks) do not get dragged into an infinite loop of judicial solution. In the last few years, the banks made a very good recovery on the NPAs by using IBC. Assets of many defaulters including people like Vijay Mallya, Nirav Modi were sold by the consortium of lenders.

NPAs along with improvement in working of PSBs (thanks to privatisation efforts) have bore fruit. India’s current NPA is at an all time low. While PM Modi’s Ministry of Finance inherited 9.6 per cent gross NPAs. The Jaitley led Ministry did well to contain it to 10.5 percent by the end of 2017-18. After that the scenarios started to change and the percentage of NPAs fell in a dramatic fashion. Incomes of banks have now reached a level of stability and they have started to earn more profits. Environment around business has improved and the country just received its highest ever FDI in 2021-22 signalling India’s rise as a replacement of China.

When Covid struck, it felt like the economy had come to standstill. India’s consumer market is the biggest asset for the government. It keeps the cycle of supply and demand going. That is why 12.2 crore people losing their jobs in the first month of Covid was believed to be a big setback for the nation. Add to that the decline in GDP due to production lines being completely shut off.

The Ministry of Finance knew that due to animal spirit ingrained in Business mindset, industry will fight back. But, they needed a consumer base to cater to. So, the Nirmala Sitharaman led Ministry started to push demand in the economy. 1.70 lakh crore was distributed under Pradhan Mantri Garib Kalyan Yojana (PMGKY). The package provided free foodgrains as well as additional packages for MGNREGA workers, farmers, and marginalised communities among others. Recently, the package drew a vast swathe of praise from all over the world.

But, the big package was announced a few months later. The Finance Ministry pumped in 20 lakh crore (10 percent of India’s GDP) through various means. Distributing this healthy sum through various regulatory mechanisms meant that the money was not wasted in creating useless assets and at the same time it reached its actual beneficiaries. In June 2021, Finance Minister Nirmala Sitharaman announced another Rs 6.29 lakh crore package. The scheme encompassed every needy section of the populace and proved to be the final nail in the coffin of economic stress of India.

Economy is the backbone of any country. Without a healthy and flourishing population, any country could easily fall into the pit of civil war. Under PM Modi’s Ministry of Finance, it has become a distant dream for any destabilising force to persuade Indians out of prosperity.

Aam Aadmi Party – Second only to Congress in Corruption