Reserve Bank of India (RBI), which is the central bank of India, looks after many tasks like financial supervision of the country, managing foreign exchange, issue of currency and detection of fake currency, preparing developmental goals for the government and so on. But the primary task of a central bank is to “look after monetary policy of country”. RBI regulates the supply of money in the country through indicators like Cash Reserve Ratio (CRR), Statutory Liquidity Ratio (SLR) and Repo rate. CRR is the cash that a bank has to maintain in its coffers, while SLR is the money a bank has to put in safe assets like government bonds, securities and gold. RBI has fixed CRR at 4 % and SLR at 19.5 % so almost a quarter of the bank’s money is in safe hands. The remaining money the bank lends to people and corporations to earn interest, which is how banks earn profits.

The main reason for NPA (non performing assets) accumulation is nonpayment by the banks’ clients. In simpler terms, it is like a shopkeeper giving a customer some goods on credit, and the customer is not able to pay back to the shopkeeper. Most of the non performing assets in India are loans by government banks, because the management of these banks gives loan to companies without checking the viability of the project or the ability of the client to pay back. They do so because companies bribe these employees, and the employees get money without any liability on them for the default in repayment of loan. Successive corrupt Congress governments in the past have played an important role in developing huge NPAs for India because of their inability, or rather, unwillingness to take strong actions on corrupt bank management. India has the second largest share of bad debts in the world with 9.6% gross NPA. Only Italy is ahead of us with 16.4 % of NPA, while other major countries like the US, China, and Japan have 1.1, 1.7, and 1.3 % of NPA ( non performing assets ) respectively. Most of non performing assets in India are with public sector banks, and countries like America do not have large NPAs because their banks are private. Private banks generally do not develop bad debts because if their management lent to a client who is a potential defaulter, then the liability would be on their shoulders, not the government’s. In the case of public sector banks, government keeps pumping money into them from the taxpayer’s pocket, and hence, these banks keep getting bailed out and revived rather than shutting down operations. 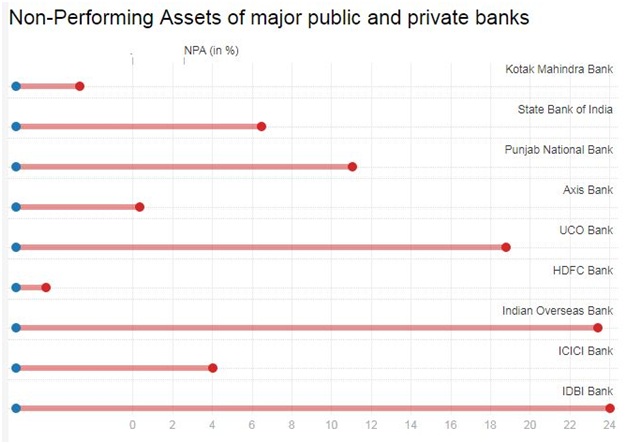 The PM Modi led government took strong decisions to wipe out NPAs from Indian banking industry. The Insolvency and Bankruptcy Code (IBC) is proving to be the most powerful weapon against the NPA problem, even the Economic Survey 2018 said the new Insolvency and Bankruptcy code (IBC) was helping improve the health of banking sector. Under the IBC law,  National Company Law Tribunal (NCLT) has approved Tata Steel’s bid to acquire the bankrupt Bhushan steel. This is the second biggest dissolution of stressed assets by NCLT under the newly adopted Insolvency and Bankruptcy (IBC) Code. Anil Agrawal led Vedanta Resources was the first successful bidder under this new law when it took over the ownership of bankrupt Electrosteel Steels for an aggregate amount of Rs 1,805 crore (USD 275.7 million) and additional funds of Rs 3,515 crore (USD 536.9 million) by way of debt. Bhushan Steel and Electrosteel were both among the first twelve companies which were referred by RBI to National Company Law Tribunal for proceedings under Insolvency and Bankruptcy Code, the other being Essar Steel, Alok Industries, Amtek Auto etc. The proceedings for these companies are under process, and RBI expects to write back 1 lach crore after 12 NPA cases referred to insolvency board get solved. Finance Minister Piyush Goyal hailed the IBC for improving banking sector. 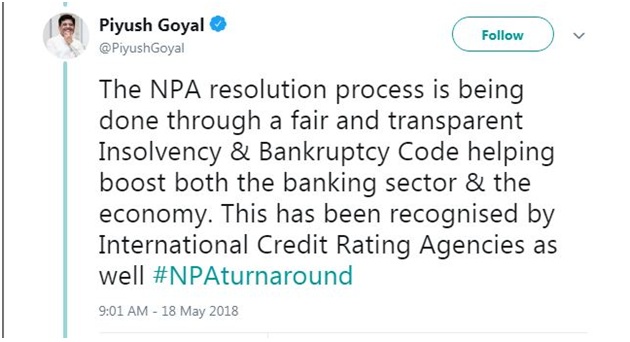 This will bring a lot of money back to government banks because these are major defaulters. PNB said it had the second highest exposure to Bhushan Steel and will benefit greatly from this acquisition. PNB sources say that the ledger outstanding to Bhushan Steel was Rs 3,857.49 crore. Principal Economic Advisor to Finance Ministry Sanjeev Sanyal applauded the historic resolution in a series of tweets: 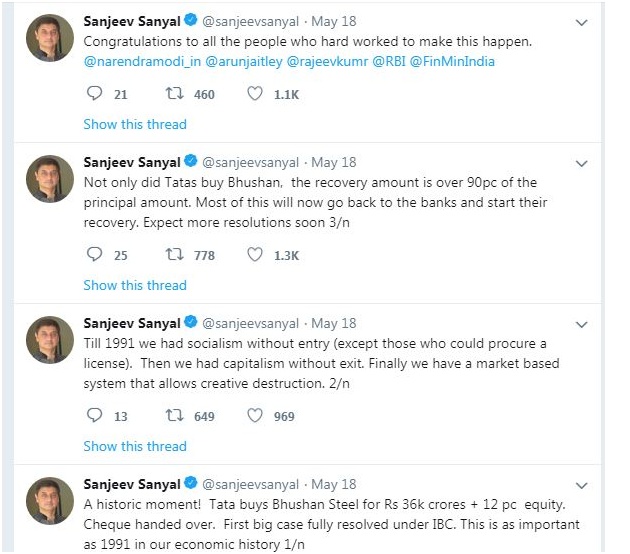 38 more cases of insolvency have been referred by banks to IBC Board following the RBI’s directive. These cases are expected to be resolved very soon under the IBC law which will improve the health of the banking sector so taxpayer’s money can be saved and set aside for developmental purposes. The gross NPAs of all the banks in the country amounted to Rs. 8, 40, 958 crores in December, led by industry loans and followed by services and agriculture sectors. Earlier, exit from the business was one of the most tedious things to do, thanks to socialist business laws which were the hallmark of previous governments. These laws helped in creating large non performing assets or NPA s, which was the largest problem faced by the Indian government and Reserve Bank of India in the previous decades. India reached 100th rank in 2018 from 130th in 2017 in Ease of Doing Business Index due to this law. The efforts by the PM Modi led government to reform India’s economy is working on the ground with 7.7% GDP growth in the last quarter, with most of the agencies predicting more than 8%  GDP growth for India in the upcoming fiscal year.