Batting for ISIS terrorists, The Print has achieved a new low!

There is a contemporary trope being overused in Hollywood. The creators are going to great lengths to humanize the villains of their story. Earlier, the villains and heroes used to be black and white. However, now, we are being made to empathize with the villains who have turned into anti-heroes despite killing and marauding the innocent. Take Thanos for example or Joker or even Darth Vader. We are being conditioned to love these madmen.

One may wonder, where is this trope coming from? Well, it is coming from nowhere but the left-liberal media which is actively pushing this agenda while the morally bankrupt industry is simply lapping it up.

Here in India, one such publication named The Print, infamous for its Editor-in-Chief and the writer of the army coup story Shekhar Gupta is now batting for villains. And the villains are ISIS terrorists. The same terrorists who have kept the Middle East and North Africa burning for the major part of the last decade.

In a feature-length article titled, “At least 40 Indians who joined ISIS now in Middle-East prison camps, find there’s no way home” the publication goes to great lengths to establish that the Jihadis who left India to pursue their terrorist careers are the victims of the situation. The article takes a sordid tone to the article, attempting to sway the readers with its emotive words.

Take this paragraph for an example. Just the way Burhan Wani, a dangerous, blood-hungry terrorist became the son of the school headmaster after the killing, another ISIS recruit is painted similarly.

The article reads, “The son of a civil engineer long settled in Kuwait, property back home in Hyderabad, his degree in computer science from Collin College in Texas almost complete. Talmeezur Rahman seemed the stuff of the perfect matrimonial advertisement. Then, one summer morning in 2014, at the end of a visit home, he caught a flight from Mumbai to Istanbul — and disappeared into the Islamic State.”

The Print gave the entire backstory of Rahman but conveniently skipped over the portion where he slowly and gradually got radicalized, made his conscious decision of leaving everything and joining a terrorist outfit. It didn’t happen overnight. It happened when portals like The Print attempted to humanize the terrorists.

Furthermore, the publication called India’s policy to not allow the jihadis into the country a ‘flawed policy’. One of the mind-numbing paragraphs read, “India’s decision not to seek the repatriation of prisoners is, however, becoming a cause for growing concern, amidst jihadist attacks on prison camps in Syria designed to free captives.”

To further emotionally manipulate the readers, the publication used a generous topping of ‘poor-widow-of-the-slained-terrorist’ stories. The wives knew what kind of activities their husbands partook in and yet made the bed.

Thus, they knew the consequences of their actions. For us Indians who have been victims of terrorism for almost an eternity now, we, unfortunately, do not have any shred of compassion for the Jihadi wives, unlike the liberals of the publications.

The Print wants India to shelter the Jihadis of a terrorist organization that has been openly instigating the Indian Muslims to terrorize their fellow countrymen.

In January, Voice of Hind, the propaganda digital magazine of ISIS released a new edition titled “Take back Babri from Hindus”. The cover of the ISIS mouthpiece read: “If you are a Muslim then you must be a terrorist so terror(ise) them….”.

The ISIS magazine spoke in detail against the demolition of the Babri Masjid. It also spoke about the acquittals in the case and sought ‘a kind of punishment that coming generations of Hindus would remember’. It exhorted the Indian Muslims to wage violent jihad against the Indian government. 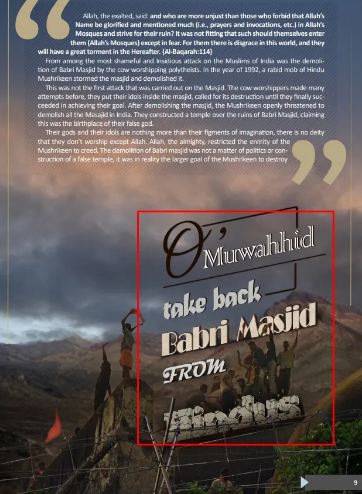 Allowing the Jihadis and their widowed wives into the country can set a dangerous precedent as the communities may fear them reverting to their old habits.

Especially when the Jihadis are as dangerous as Syed Muhammad Arshiyan Haider, who according to the Print was responsible to develop Islamic State’s suicide-drone systems, as well as short-range rockets.

As reported by TFI, in 2020, the widowed wives of Islamic State operatives that were radicalized by the infamous Kerala module also wanted to return to India. The women, all from Kerala, travelled to Nangarhar in Afghanistan in the years 2016-18. Their husbands were killed in different attacks in Afghanistan. They are now widows and have been lodged in Afghanistan’s prisons since November-December 2019.

Back then, Ahmad Zia Saraj, the head of Afghanistan’s National Directorate of Security had said the Afghan government was in talks with 13 countries (including India) to deport the prisoners. At the time as well, liberal media portals paraded their agenda by batting for the IS recruits.

Read More: Four women from Kerala who joined ISIS wanted to return to India but the Centre has sent them a clear message

These Jihadis and the widowed wives pose a massive security threat to the country. PM Modi’s ‘zero-tolerance policy on Islamist terrorism does not leave any room for complacency. The agencies have been intentionally slow in reacting as there is always a big worry with the ISIS returnees.

In the last couple of months, IEDs have been discovered in and around the capital city of Delhi which has sent the warning bells ringing. The government cannot complicate the situation by allowing these Jihadis.