by Apoorva Shukla
in Trending
32

A person who wants to pursue his/her career in Academics can only gain respect if the prefix ‘Dr’ is attached before their name. Being a PhD holder is a prerequisite to establishing oneself as a scholar in a particular subject or stream in India.

But why is PhD a requirement to prove one’s ability? Why all the hype is just about the prefix attached with the name and no heed is paid to the topic of research. How are the doctoral degrees attained? Does it require any rigorous process? Is PhD done to contribute to the field of research or is it a way to get employment through enrolment? Let’s find out.

The doctoral degree has become the parrot that magician takes out from their black hat in every show. The doctorate which was once pursued to contribute to Nation and its research projects have become a mad rush. The students lacking skill, capture PhD seats to get fellowships.

India stands at the fourth position in producing the highest number of PhD scholars with a toll of 24,000. The list is topped by the USA, which awards more than 64,000 doctorate degrees every year. The findings of the Organisation for Economic Cooperation and Development established these numbers.

The enrolments in PhD are mainly done to satisfy two causes. One as to attach oneself with the sense of superiority and dignity. Second, to gain government fellowships in the name of being ‘scholars.’

With the changing dynamics and approach, the dignity and respect associated with a doctorate have gone down the drain.

India crippled by the ‘Doctors’

Since the age of civilization, India has advocated that ‘There is no age limit to study and gain knowledge.’ But in today’s era, when there exists a cutthroat competition, it is very necessary to have quality education at the correct age.

India is a destination to gain knowledge, but where do we Indians stand on the scale of knowledge. This question should be directed at us because our country produces as many as around 60 Lakhs Graduates and 15 Lakhs Postgraduates every year.

While many Indians take pride in attaining a doctorate, very less is known about their hustle. Indians are obsessed with ‘titles’, and the prefix ‘Dr’ lies in the same row. People enrolled in a doctorate are not often seen conducting research and contributing to the research fraternity. The ‘doctors’ are no longer seen holding piles of paper bound spirally and there are very less trips to colleges and guides as well. 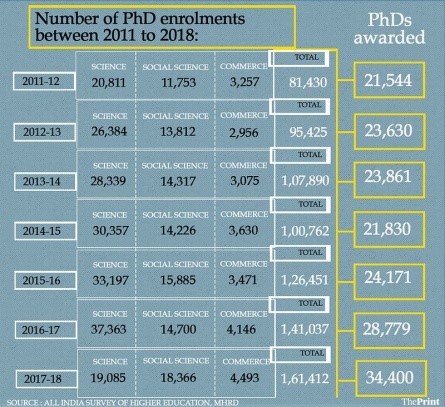 The University Grants Commission had recently expressed concerns about the quality of PhD research in India. The reason is a 50% hike in the number of enrolments in Doctorate. But the quality of the thesis has fallen constantly. And it would not be wrong to say that PhD is a scam running in the name of quality education.

Dissertations and its constantly deteriorating quality

As mentioned above the enrolment in PhD programmes have increased. But the quality of topics chosen, and the thesis being written is constantly deteriorating. The topics that are said to be chosen after the Board’s nod are no more relevant. The thesis written today is majorly survey-based. As today’s generation does want to conduct analytical research. The topics chosen and the thesis written have no relevance. According to a report published by  The Print, the thesis that is majorly written today is more theoretical, repetitive, with no contemporary relevance and use.

The topics chosen are like, ‘Tribal movements of Gujarat in 19th and 20th century’, ‘Colonisation and development problems in Kerala — a case study of evolution and nature of public action 1850-1956’, ‘Widows and widowhood in the colonial Punjab’ and ‘A survey on the condition of working women in the coalfield and steel plants in Jharkhand since 1947’.

Research in the field of Science and Technology, even after investing a huge amount, is not benefitting the nation as the works in this field are not innovative enough. The topics of History, Political Science and Literature are often repetitive and distant from the contemporary world.

After the topics, the thesis is far below the quality as often filled with plagiarized content. The Universities mostly have no mechanism to check the extent of plagiarism and it goes unchecked. The ‘scholars’ of India are no more than ‘copycats.’

MP3 and GPS would not have been a part of lives without the contribution of PhD scholars. But with constantly deteriorating quality, there is a debate on the value that the Doctorate holds. Is Doctorate really beneficial for Nation? Or is it just a wastage of resources?

Batting for ISIS terrorists, The Print has achieved a new low!