by Abhishek Kumar Singh
in History
10

On 30th January 1948, Nathuram Godse shot Gandhi from point-blank range. Gandhi died on spot. Indian state punished Godse for that and hanged him for killing a person who had advocated for non-violence throughout his life. However, even before Godse’s hanging, the revengeful Congressi had decided to use Gandhi’s killing as a justification for the Chitpavan Brahmin massacre in Maharashtra.

The massacre started from Mumbai

Hours after Gandhi was killed, a wave of violence swept over whole Maharashtra. Chitpavan Brahmins, the class of Brahmins to which Nathuram Godse belonged were the main targets of groups committing violence. For the next 4 to 5 days, Chitpavan Brahmins were subject to Mughalesque era killings, rapes, and lootings from Congressis in collusion with anti-Brahmin groups.

The series of killings started as soon as Gandhi’s assassination news reached Maharashtra. Official accounts suggest that at least 15 people were killed in Mumbai on the very next day of Gandhi’s death.

Read more: Someday we will discuss Godse freely and fearlessly, but Indian Democracy is still to mature to that level

Soon, the anti-Brahmin wave spread to the whole of Maharashtra. The homes of Chitpavan Brahmins were systematically identified, their women were raped, men were killed and then the houses were burnt.

Congressis aligned with other groups such as Marathas, Jains and Lingayats and took it on a mission mood to destroy everything which had even an iota of Chitpavan mark on it. Not just houses were burnt, but even factories and offices which provided jobs were not left by the rioters.

Systematically planned massacres did not even spare freedom fighters

The massacre was systematically planned as mobs possessed everything to destroy anyone coming in their way. No matter where mobs reached, they were armed with Kerosene canisters, rods, machetes. Buildings were attacked with cotton balls and kerosene-soaked paper and then they were burnt. The anarchy can be gauged from the fact that even children were butchered like animals by these Congress supported goons.

Not even those whose families spent their whole life serving the nations were spared. Veer Savarkar’s properties were destroyed, and his brother Veer Narayan Savarkar was pelted to death by the mob.

On the killing of his brother, Savarkar had written, “He who relentlessly served the nation, He who relentlessly worked for the people, He who stood firm against the Brits, He who fought for liberating Maa Bharati, Today was stoned to death by his own brothers for whom he fought”

The activities were not limited to a few districts. Kolhapur, Solapur, Satara, Sangli and Pune became the main centres of Chitpavans’ genocide due to the well-organised nature of killings, Chitpavans living in 300 districts of 13 talukas were forced to either die or flee from the state.

Official reports have shown that more than 1000 houses were subject to burning in Satara alone. Selected killings were so immense that 3 members of one family were killed by the mob, just because their surname was Godse. It is estimated that at least 5000 to 8000 people were murdered by Congress goons and their allies.

Read more: Himani Savarkar – The Nationalist and daughter of Godse 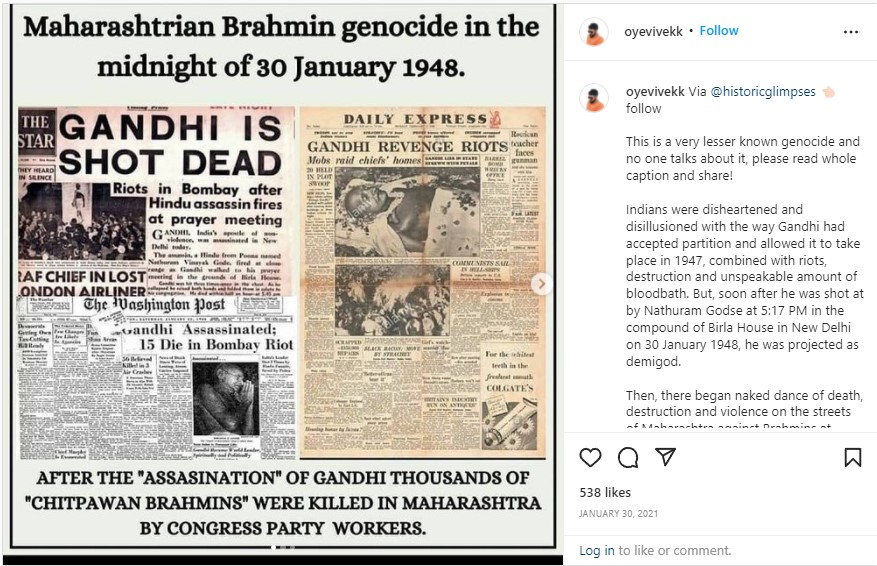 The systematic media discrimination against Brahmins is not a modern era phenomenon. When Chitpavans were subject to systematic murders, no major Indian media portal covered it. If not for foreign media, we would not be giving you a detailed description of independent India’s first caste-based atrocity.

Read more: The upcoming movie “Why I Killed Gandhi” is giving Congress nightmares

A few survivors have bravely come forward to detail their story in the public domain. One of them is Arvind Kolhatkar.  His house was in Satara, 110 km from Pune. His family was a minority in an area full of non-Brahmins.  Firstly, the mob systematically destroyed the furniture and then they took on printing press and typewriter to ensure that if his family survives, they do not have the means to read and write.

Chitpavans had to pay for their loyalty to country

Chitpavans were one of the most prominent groups opposing British rule in India. Mahadev Ranade, Gopal Krishna Gokhale, Lokmanya Tilak, Veer Savarkar, and others were some of the prominent leaders in the independence movement who belonged to the Chitpavan family of Brahmins.

Moreover, Peshwas, the backbone of the Maratha Empire were also Chitpavans. Due to their prominence in every area, various groups inside Maharashtra had developed enmity with them. These groups were looking for an opportunity to eliminate Chitpavan Brahmin’s influence from Maharashtra. Gandhi’s death became a tipping point for them to unleash their revengeful agendas.

Whenever people talk about terrorism in India, they do not think for a second before calling Godse a terrorist. Godse did was plain murder. What Congressi Goons did in the aftermath imposed an undying terror in the minds of survivors. A whole community had to flee due to fear of their lives. If this is not terrorism, then we need a new definition of the term.

Impact of Mughals on Indian Culture Chapter 2: The Effect on how Indians dress up

“Goodluck and Goodbye Congress;” Sunil Jakhar’s statement says it all

Andrew Symonds: Once in a generation cricketing legend