A recent Wealth creation study by Motilal Oswal, one of India’s leading stock brokerage firms has found that over the last 25 years, the biggest and consistent players across India Inc to provide the most significant returns have been the private players. However, peculiarly, the much-famed government-backed PSUs (Public Sector Undertaking) languish at the bottom of the lists.

The liberal lobby along with the opposition often has two names on its lips to target the corporate culture of India – Reliance, and Adani. However, in what may come as a heartburn moment for them, both private giants have been at the top of the pile in wealth creation.

Oil-to-telecom conglomerate Reliance Industries (RIL) has emerged as the country’s largest wealth creator, adding a staggering Rs 9.6 trillion over the past five years. Profit for RIL jumped 8 percent annually over this time while its share price compounded at 31 percent annually.

Meanwhile, Adani Transmission has emerged as the fastest wealth creator over 2016-21, compounding wealth at a compounded annual growth rate of 93 percent. The brokerage firm also added that Adani Enterprises has been the top all-around wealth creator.

The top 100 companies created Rs 71 trillion wealth in the past five years, by far the highest ever wealth created in the last 26 five-year periods, according to the study. They delivered returns of 25 per cent CAGR versus 14 per cent for the BSE Sensex. 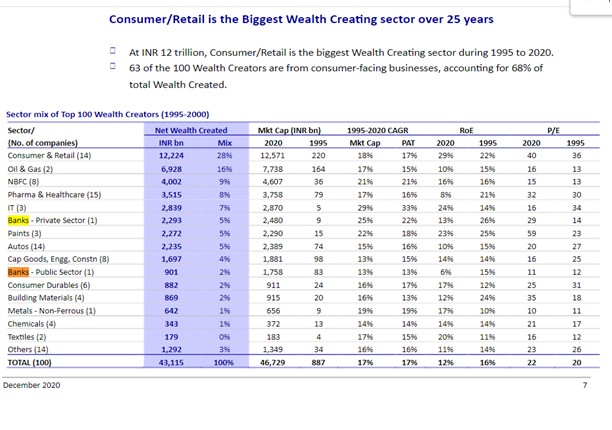 NITI Aayog believes the Private sector is the future

Even the biggest think-tank in the country believes that the development chariot of India in the future will be driven by the private sector.

Rajiv Kumar, Vice-chairman Niti Aayog recently remarked, “I sincerely believe this that we are now in the cusp of a major change. With all transformation that has been done in the last seven years in terms of foundational structural difficult reforms, I think we have now put a framework in place where we will see the private sector driving growth and being in the driver’s seat going forward,”

PSB’s and their problem with privatization

However, there has been a growing trend and the reader must have observed where PSBs and their employees routinely leave their day jobs and sit on dharnas, munching food and enjoying themselves while claiming to fight the government and its plans of privatizing the PSBs.

They do not want their authority to be questioned and they particularly don’t want to serve the people efficiently as it will interfere with their corruption escapades. And thus, they protest against privatization.

As reported by TFI, employees of public sector banks went on a two-day strike against the Modi government last week to protest against the introduction of the Banking Laws (Amendment) Bill, 2021 in the winter session of the parliament.

With the public banks, putting huge pressure on the exchequer the government is even planning to privatize a few of them — starting with IDBI bank. Recently, RBI announced that it will be creating a new security clearance framework for screening potential bidders of PSBs. The process would be different from the privatization of any other PSU as more restrictions and measures will be embedded in the process.

In the Union Budget in February this year, Finance minister Nirmala Sitharaman repeated the proposal and set a target of disinvestment worth 1.75 lakh crore rupees by privatizing and selling stakes in public sector banks. With the approval of the Union cabinet, the process will start very soon.

Read More: Dear bank employees, continue your stride but PSBs will be privatized

The reason behind this lacklustre performance of the Indian banking sector is the domination of the public sector banks which account for around 70 percent of the country’s banking industry. It has been almost five decades since Indira Gandhi nationalized banking in 1969, with the intention to improve lending in ‘strategic areas’, but since then the banking story of the country has only gotten worse.

The discoms aping the PSBs protests against privatization

Taking a leaf out of their (PSB employees) book, over 20,000 employees of the Jammu and Kashmir Power Development Department (JKPDD) went on an indefinite strike last Friday to protest against the privatization of the sector. The rogue employees cut the power lines and almost 50-80% parts of the UT had to face blackouts.

Jammu | At the request of the Jammu Administration, the Indian Army has deployed its troops at main power stations to restore power supply, in view of power dept employees' strike pic.twitter.com/VWnO0lFx09

Read More: Jammu and Kashmir is in dire need of electricity reforms, and blackmail by govt employees must not be tolerated

The government must push against the unions and implement the banking and power sector reforms as soon as possible. The study has proved that the public sector has been sluggish and lethargic. Privatization is the future and the government must take an unwavering stand.

France did it again! And this time the “Wokes” will be pleased too

After Capt Amarinder, Harish Rawat could split from Congress and start his own party