Now that fake farmers have been appeased, real farmers might start protesting

In contrast to the perception that the entirety of India rose in protest against the three farm laws – now set to be repealed, only a section of farmers from a particular state raised their voice against it. Prime Minister Narendra Modi in his 9 AM speech on Friday suggested the same. However, in trying to appease the fake farmers who got their way through a strong protest of anarchy and vandalism, the Modi government has left the flank open for the small farmers to get hurt.

India is an agrarian economy and yet the agriculture sector is running on archaic systems, desperately begging for modernization. The three farm laws were supposed to bring parity to the small farmers who are often razed by the big farmers and Arhatiyas (middlemen between the government and farmers in the food procurement system).

PM Modi- the reformist was supposed to be the game-changer. After all, he brought the GST system that has smoothened the taxation process and filled the government coffers with thousands of crores with routine frequency.

However, repealing the farm bills is unlikely to end the protest that has held the national capital hostage for almost a year. Most of the alleged farmers camping in Delhi harbor political and religious ambitions. As far as the content of the bill is concerned, not a single decision was going to hurt the real farmers.

The misconceptions regarding the bill

The supposed farmers were protesting on the presumption that the Minimum Support Price (MSP), which benefitted the farmers of Punjab, Haryana, and Western Uttar Pradesh disproportionately, will be removed. And, with the corporate entry in the Agriculture sector, their role in production will be reduced.

The first bill is about the freedom to sell the product. The second is about contract farming. The third is about removing much agricultural produce from Essential Commodities.

The first and second bills were set to give better price realization for agricultural production while the third would have enabled private investment in agricultural infrastructure.

These laws permit the sale of agricultural produce outside the Mandis regulated by the Agricultural Produce Market Committees (APMC). Outside APMC, the Arhtiyas would not have been able to gain access to their meaty commissions.

While a poor state like Bihar removed the compulsion to sell in APMC over 14 years ago, Punjab and its farmers are still refusing to usher in the new reforms.

After freeing the shackles of APMC, Bihar’s agricultural growth in the last one and a half-decade has been around 8 percent which is three times more than that of India’s average (3 percent) and four times that of Punjab (2 percent).

Despite the state government not providing the best of facilities, such a quantum leap is astonishing. Imagine, if Punjab had clocked in such changes a few years back or had stuck with the farm laws.

Farmers would have got lost in the electronic framework: Detractors of the bill

One of the articles in a leading left-leaning publication argued about the reason for repealing the farm laws, “Dismantling APMCs and opening up agricultural sale and marketing outside these mandis as well as providing a framework for electronic trading exposes farmers to the volatility and vicissitudes of the market, which is invariably imperfect.”

Yes, it is the same India that recently clocked over $100 billion in UPI transactions and yet the opposition made the farmers of the country believe that they would have lost their precious capital in the supposed new “framework for electronic trading”.

The extent of the power of the middlemen in Punjab could be gauged by the fact that earlier this year, the Punjab Government had vehemently opposed the central government’s idea of one nation, one MSP, one DBT.

Punjab’s Finance Minister Manpreet Singh Badal had reportedly said, “The Government of India refused to budge on the DBT issue and insisted that Punjab will have to transfer money directly to the farmers within 48 hours. Otherwise, they said, they (the Centre) will not procure from Punjab. They said that it’s their money, their food and this is the way they want it. They will not pay the arhatiyas (commission agents).”

The then Chief Minister Captain Amarinder Singh had held a meeting with Arhatiyas and ensured them that they will remain an integral part of the system. DBT has been a gamechanger on the national map in other schemes and yet the opposition, funded by the Arhatiyas managed to find demons in it. A similar analogy can be drawn for the farm laws.

As for contract farming, a little comparison can help clear the picture. Earlier this year, former CM Amarinder Singh introduce a bill on the floor of the Punjab Assembly to repeal the Punjab Contract Farming Act, 2013.

According to the said Act, farmers can be penalised with a fine of up to Rs. 5 lakh and a jail term of one month, if they seek an exit out of or renege a contract, signed earlier with a private player or corporate house.

In contrast, the farm reforms passed by the Modi government have or had no such provisions, and it is made abundantly clear that a farmer can exit any contract at any given time without fearing any non-compliance triggered action.

Punjab has been pampered for far too long

Moreover, it’s the mollycoddling by the successive regimes that has left Punjab in a deep rut. The rich Arhatiyas masquerading as farmers have managed to plummet the state’s fortunes.  Farmers – the backbone of Punjab’s economy, are mere landowners in the state.

The majority of the labourers who work in the fields of Punjab are migrants from Bihar, Jharkhand, and Uttar Pradesh. This seems to be the reason why such a large number of farmers are gathered on the Delhi border for such a long-time – because they do not have the responsibility of farming back home.

As reported by TFI, until the 1990s, Punjab was miles ahead of other Indian states in terms of its per capita income — thanks to the ‘Green Revolution’ of the late 1960s. However, as India transformed from a primarily agrarian economy to a service and industry-based economy after the reforms of 1991, Punjab was left far behind.

Read More: Low GST collection and absolute disregard for laws – Punjab is the worst example for farmers all over the country

Ideally, the GST collections from Punjab should have been much higher than Bihar, given the fact that the purchase on which GST is imposed – goods consumed by high-end consumers – are sold more in the state. 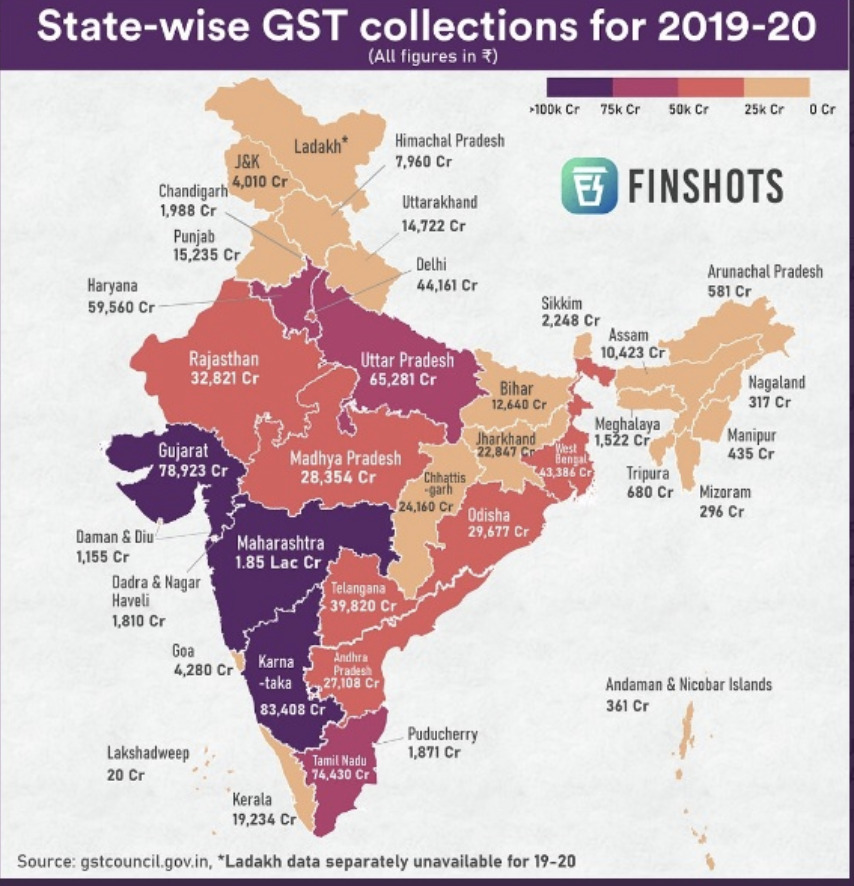 However, GST collection data for FY20 showed that Punjab only contributed Rs 15,000 crore to the exchequer while Bihar – one of the poorest states of the country, contributed more than 12,000 crore rupees. 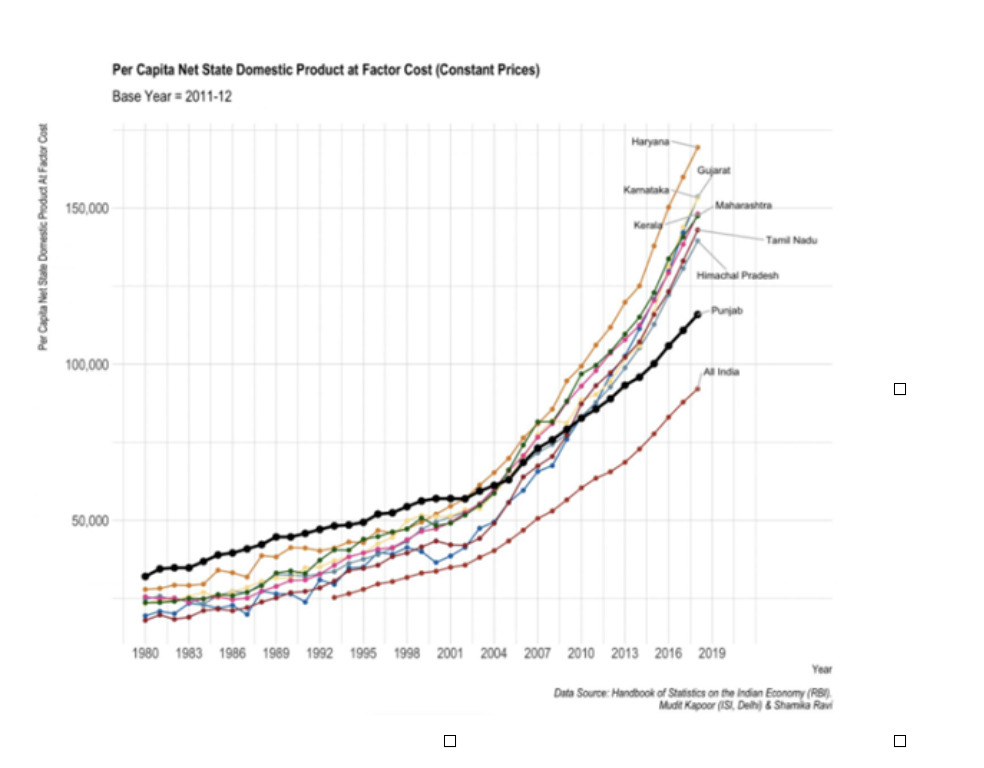 As per the graph above by economists Shamika Ravi and Mudit Kapoor, the economic growth in Punjab in the last few decades has been so low that it has been left far behind by many states in India, in terms of per capita income. Today per capita income in Haryana is 1.5 times more than that of Punjab. The state is now far behind in all three sectors- agriculture, industry, and services.

Punjab and its middlemen have set the country back by some decades. No political party will now be willing to touch the taboo topic of Agricultural reforms and that perhaps is the biggest regret that PM Modi and his government will carry.