JNU just held a Webinar on India’s “occupation” of Kashmir. It is time to destroy this leech of an institution

Unlawful activities have become an everyday occurrence in JNU. From anti-national slogans, illegal trafficking of banned drugs, to holding the Vice-Chancellor and a professor hostage for hours, JNU has been in the news for all the wrong reasons for years. Now, the university is once again caught up in controversies for holding a webinar on India’s “occupation” of Kashmir.

JNU, on Friday, touched a new low, when it reportedly mentioned Kashmir as ‘Indian Occupied Kashmir’ in the invitation for an event organised by the JNU’s Centre for Women’s Studies. The invitation quoted, “Gendered resistance to Indian occupation in Kashmir.” The JNU, however, after realising the blunder they have committed, later cancelled the event. 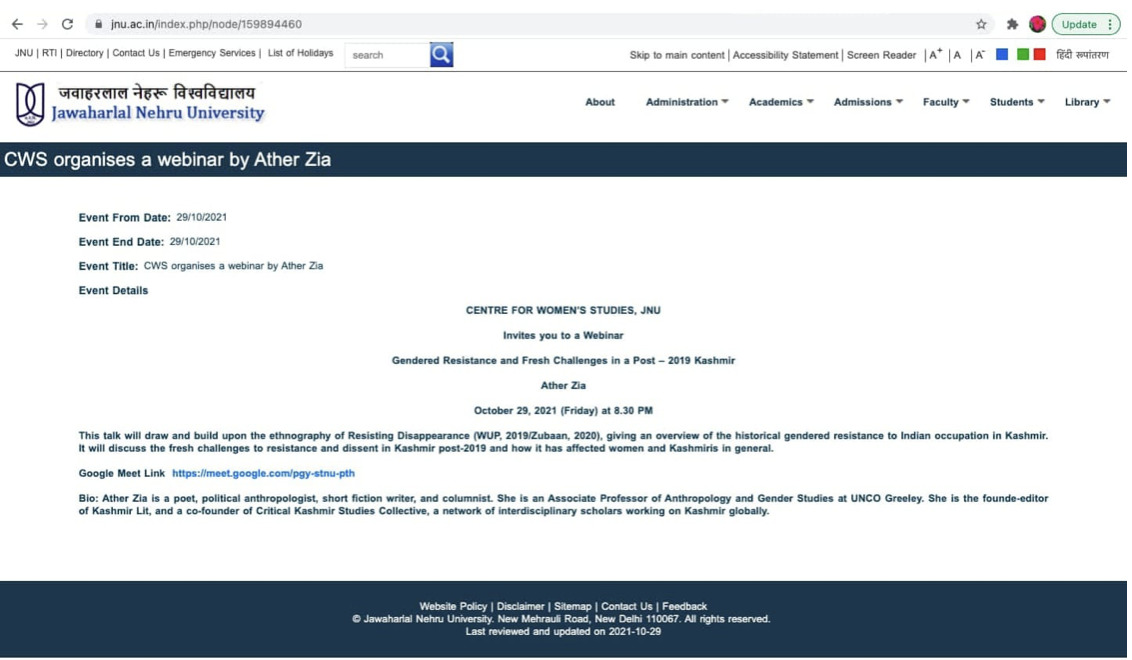 JNU Vice-Chancellor M Jagadesh Kumar, while addressing the media stated, “Webinar titled ‘Gendered Resistance & Fresh Challenges in Post-2019 Kashmir’ was to be organised by Centre for Women Studies. The JNU administration instructed the event to be cancelled.”

Meanwhile, JNU professor Dhananjay Singh made a strategic attempt to portray JNU as the victim. Calling the entire incident unfortunate, he stated, “Actually, it is very sad and unfortunate, not only an act or statement against the interest of the country but it also brings a bad name to JNU, and as a teacher and former student I oppose it and I’m extremely sad that such act could be committed. These are the students who are responsible to bring a bad name to the university.”

“All I can say is that people should be conscious that our soldiers are fighting at the border to protect Kashmiris from the terrorists and Pakistan. I do not understand the root of this ideology,” he further added.

On this grave offence committed by JNU, Vinod Bansal, the national spokesperson of Vishwa Hindu Parishad (VHP) tweeted,” JNU again became a Field for anti Nationals. Kashmir which is integral part of Bharat since inception and will remain forever. The Pakis must be booked and the prestigious edu institute sud be sanitised & vaccinated soon.”

JNU again became a Field for anti Nationals. Kashmir which is integral part of Bharat since inception and will remain forever. The Pakis must be booked and the prestigious edu institute sud be sanitised & vaccinated soon. pic.twitter.com/xezWtortaZ

As earlier reported by TFI, in 2020, after the administration decided to name the JNU entrance road as Veer Savarkar Marg, the JNUSU, dominated by the Left alliance, had termed the naming the road after Hindutva icon as “shame on the legacy of JNU.”

The Left-wing vandals had also vandalised the JNU main road nameplate, named after Veer Savarkar Marg. The vandals had stuck a poster on the nameplate which read Mohammed Ali Jinnah Marg.

It must be remembered that in 2019, prior to the inauguration of the Swami’s statue, political goons of the university belonging to the far-Left and anti-India fronts had vandalised and defaced the statue. ‘F*ck BJP,’ ‘Bhagwajalega’ were some of the slurs used by a section of JNU students. Nonetheless, Prime Minister Narendra Modi later stepped in to inaugurate the statue of Swami Vivekananda himself.

JNU is a ‘promised land’ to adherents of Communism. Now, by organising an anti-national event, the university has once again proved that it has become hotbeds of political activism rather than becoming the centre of quality education and research.