After an intense day of speculation and turmoil where Sukhjinder Randhawa nearly became the Chief Minister of Punjab, only to lose the crown to Punjab Congress Committee (PCC) President Navjot Singh Siddhu loyalist Charanjit Singh Channi, the conundrum finally came to a halt, late in the evening yesterday. While liberal media termed the decision of crowning Channi, a Dalit, as the CM, a masterstroke, the same media housed showed an utter lack of understanding about the religious identity of one of the largest communities of the country and state.

Financial Express before Channi was made the CM carried a report with the headline, “Punjab Congress Crisis: Sukhjinder Randhawa likely to have 2 deputy CMs, one Hindu and one Dalit”. Yes, the publication referred to the two deputy CMs as coming from different religious groups.

The sentence ‘One Deputy CM will be a Dalit, and one Hindu’ sounds plain wrong. A Dalit is also a sub-caste of Hinduism, which cunning politicians, over the years have chosen to differentiate solely to divide the vote banks.

What started as a shrewd and unethical tactic by politicians has naively been adopted by the media outfits who tend to shy away from their duties of conducting due diligence before publishing a story. Thus referring to two Dalit Hindus as Dalit and Hindu separately. 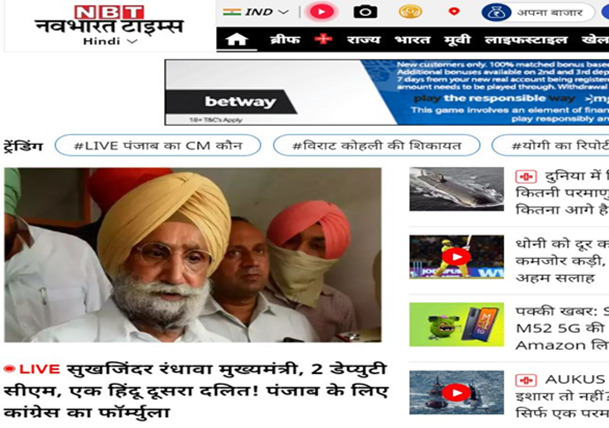 Hinduism and the religious practice and beliefs of Dalits are nearly inseparable. Despite more than 200 years of attempts by missionaries, Islamists having active support of political parties and politicians, a majority of the people of the community still identify themselves as Hindus.

Planning to separate Dalits from Hindus who have lived in backwardness due to upper castes is a trope that is routinely used by the left-leaning media outfits. In Punjab, the population of Dalits is more than 35 percent, and with the biggest face of the party, Captain Amarinder Singh backing away, it is the only vote bank left that can help Congress retain power.

Pakistan removing Dalits from the census

It appears that dismantling the identity of a Dalit Hindu as an idea has been copied from our neighboring country Pakistan where the government during a census in 2017 declared that ‘Scheduled Castes’ (also known as ‘Dalits’ in popular socio-political discourse) are not Hindus.

In the column where one needed to indicate one’s religion, “Scheduled Castes” was one of the options apart from Hinduism. So, one had to either indicate themselves as Hindu or a Dalit.

If one had any doubts regarding the religious identity of Dalits then look no further than the Ram mandir Bhoomipujan ceremony conducted by BJP last year. After laying the foundation stone for the Ram temple in Ayodhya, the Shri Ram Janmabhoomi Teerth Kshetra Trust delivered the first prasad to the house of a Dalit Mahaveer in Ayodhya, thus reaffirming the belief that Dalits are indeed Hindu by religion. However, the elite political and journalistic class continues to believe otherwise.