After falling in line with the government’s diktat on the IT laws, Twitter is now looking to cover its tracks. The US-based company has removed Twitter India’s current Managing Director Manish Maheshwari from his post and transferred him to a new role in the US. Maheshwari will not be quitting the company but will be moving to the US where he has been appointed as the Senior Director, Revenue Strategy and Operations focused on New Market Entry.

Manish Maheshwari was a trusted lieutenant of Twitter who despite being put under heavy scrutiny by the authorities did not succumb and spill the secrets of the company. Maheshwari held his end, but Twitter always feared that he knew too much and thus took pre-emptive action by shipping him to foreign shores. Maheshwari shielding Twitter Inc by claiming that it has no shares in Twitter India, and hence little to do with the controversies triggered by Twitter’s political bias in India. He also dodged questions about the hierarchy followed in the company and the chain of command, hence shielding the origins of certain policy updates. So who actually calls the shots at Twitter India? Manish Maheshwari did his best to shield this information.

As reported by TFI, when Delhi Police arrived at Maheshwari’s Bengaluru residence for questioning, he told the Police that in Twitter India’s hierarchy, MD is merely a sales executive. After the fake news of Loni, the Ghaziabad incident went viral on Twitter and the social media giant failed to curb it, unlike dubbing Sambit Patra’s toolkit tweet as ‘manipulated media’ — an FIR was consequently lodged by the UP Police against Twitter Inc, and seven others in connection.

Meanwhile, Maheshwari was summoned for questioning. However, once again, shielding Twitter from the authorities, Maheshwari changed his bio from ‘MD at Twitter’ to ‘Trying to run business @TwitterIndia”. 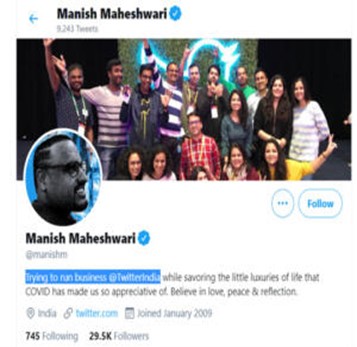 The complicated history of hierarchy when it comes to Twitter and its business has astonished outsiders. The company behaved and operated as a cult. When asked if there was someone whom he reports to in India, Maheshwari told the Delhi Police team that “his boss [Sasamoto] is not an employee of Twitter Communication India Private Ltd (TCIPL) and he does not know the exact name of the legal entity in which his boss is employed, but his best guess was Twitter Asia-Pacific”. Sasamoto is based in Singapore and was appointed as head of Korea, Japan, and the Asia Pacific a few months ago.

It is interesting to note that Sasamoto was one of Twitter’s very few high-level executives to post a farewell message for Maheshwari. He tweeted, “Thank you to @manishm for your leadership of our Indian business over the past 2+ years. Congrats on your new US-based role in charge of revenue strategy and operations for new markets worldwide. Excited to see you lead this important growth opportunity for Twitter.”

Thank you to @manishm for your leadership of our Indian business over the past 2+ years. Congrats on your new US-based role in charge of revenue strategy and operations for new markets worldwide. Excited to see you lead this important growth opportunity for Twitter.

But Maheshwari is out because he knew too much and it was no longer safe for Twitter to keep him in the current position because the Indian government was too close to getting many answers from him about the shadowy functioning of Twitter. As reported by TFI in June, it was revealed that the Indian arm of Twitter, up until the end of March 2019 had not set up an Internal Complaints Committee (ICC) as required under the Sexual Harassment of Women at Workplace (Prevention, Prohibition and Redressal) Act, 2013, six years after its inception in the country.

Read More: So WOKE that it didn’t need POSH: Twitter had no Prevention of Sexual Harassment committee for many years

Despite two cases of sexual harassment emerging from the Delhi and Bangalore office of the company, Twitter Communications India Private Limited failed to set up ICC, as the filing submitted by the company to the Ministry of Corporate Affairs (MCA) on 19 September 2019 for the financial year April 2018-March 2019 revealed. This put Twitter in a spot when it came to its standoff with the Modi government.

Twitter’s hierarchy is not well defined, it formed an Internal Complaints Committee (ICC) as required under the Sexual Harassment of Women at Workplace (Prevention, Prohibition and Redressal) Act, 2013, six years after its inception in the country and it does not want to report child sexual abuse material to Police, as mandated under the POSCO Act. Such lapses had made Maheshwari susceptible to deeper questioning by Indian authorities.

Twitter has also lost its ‘intermediary’ status in the country and Twitter India MD, or any other top executive functionary could face police questioning and criminal liability under IPC over ‘unlawful’ and ‘inflammatory’ content posted on the platform by any user.

Rahul Gandhi had posted the image of a minor rape victim’s parents and revealed their identity. After the clamour ensued, Twitter was forced to suspend Gandhi’s account. However, the top brass of the California based company felt that Maheshwari could again be brought in for questioning and thus was removed from his post.

The California based company after dillydallying for months, folded, and submitted to the revised IT laws of the country after new IT Minister Ashwini Vaishnaw took the charge. The social media firm, in its affidavit to the High Court, stated it had appointed a permanent Resident Grievance Officer (RGO), Chief Compliance Officer (CCO) and Nodal Contact officer (NCO) on August 4 in compliance with the rules.

Its MD is always mouthing mumble jumble and the parent company, replete with its left-wing partisanship is dubious to its core. With such sketchy behaviour, it is indeed a miracle that the company has managed to run for so long unrestrained in the country.