Not just ‘Vetrivel, Veeravel,’ Indian Army also uses ‘Jai Maa Kali,’ ‘Raja Ram Chandra ki Jai,’ ‘Bol Bajrangbali ki Jai’ in its slogans and leftists can do nothing about it

National Confederation of Human Rights Organization (NCHRO), a far-left organisation has caused an uproar over the Indian army war cry of ‘Veeravel Vetrivel’ posted outside the 3rd Madras Regiment headquarters at Madukkarai near Coimbatore in Tamil Nadu, according to a report by Times Now. ‘Vetrivel, Veeravel’ which when translated means “victorious spear, courageous spear” has historically been used as a war cry by Tamil warriors since olden times. Vel is the holy spear of Lord Murugan, the Hindu war deity.

#NewsAlert | National Confederation of Human Rights Organizations opposes 'Veeravel Vetrivel' slogan displayed at the entrance of Indian Army base in #Coimbatore. NCHRO says 'religious slogan' is not permitted in the Armed Forces.

The dubious NGO claimed that it is a religious slogan, and thus should not be permissible in the Armed Forces. While the said organisation operating pre-dominantly in the south is raising objection over the slogan, the Indian army since the dawn of time has been using such slogans to boost the morale of its soldiers. And yet no one can raise any doubt on the sanctity of the forces where all religions command equal respect.

“Bol Shri Chhatrapati Shivaji Maharaj ki Jai” (Say victory to King Shivaji) is the war cry used by the soldiers of Maratha Light Infantry. Similarly, there are myriad slogans having the influence of the region and the customs where the said regiment was raised. It’s not communal, albeit it is absorbing the customs of the region so that the army and its soldiers can feel at ease.

Not only the Indian army, but the Indian Navy also uses “Sham-no Varuna” as its motto which when translated means “May the Lord of the oceans be auspicious unto us”, referring to Bhagwan Varun. The war cry of the Navy which shores up India’s defences in the water bodies is “Bharat Mata ki Jai” (Victory to Mother India).

It has been seen in the recent past that the Islamo-leftist cabal and its leaders like Asaduddin Owaisi have a problem in referring to the country as Bharat Mata. The Hyderabad MP has refrained from chanting the slogan repeatedly.

“I don’t chant that slogan. What are you going to do, Bhagwat sahab,” the Hyderabad MP was quoted as saying when RSS chief Mohan Bhagwat had suggested that the new generation ought to be taught to chant slogans hailing mother India to infuse patriotism.

While no official response was been given by the Indian Army and one highly doubts there will be one. The government and the army should remain steadfast and must not succumb to the outrageous demand of the shady organisation. Doing so will mean empowering such leftist institutions who will taste blood and start to come after the Indian armed forces and try to break the spirit.

A cursory glance at NHRCO’s webpage is enough to understand the NGOs motivations, allegiances and basic ideology. The NGO hails now-dead Maoist Stan Lourduswamy as a martyr. 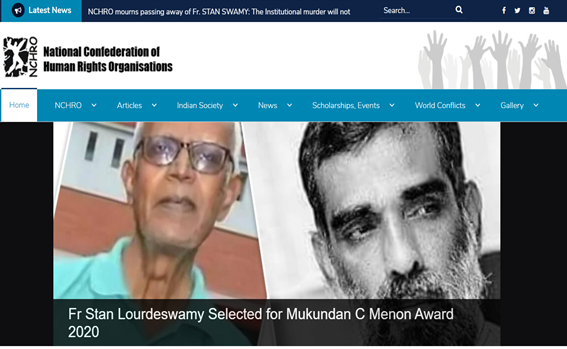 It is pertinent to note that the slogan “Vetrivel, Veeravel” was used by BJP unit of Tamil Nadu during its ‘Vetrivel Yatra’ before the 2021 assembly election. The slogan was also used by PM Modi during his campaign in the state. Not only this, DMK President and current Chief Minister of Tamil Nadu, M K Stalin, an atheist known for his anti-Hindu credentials, during the election trail in Tiruttani held Lord Murugan’s spear-like weapon ‘Vel’ and posed for shutterbugs.

History taught us that Maharana Pratap’s forces retreated from Haldighati. Now Real History is coming out

Gyanvapi thieves are the stupidest morons in the history of mankind

Lalu has been out of power for good 20 years, but his scams are never-ending