Navjot Singh Sidhu, the senior Congress leader who keeps jumping between parties and different camps within Congress, has pointed fingers at the Minister of Consumer Affairs, Food and Public Distribution, Piyush Goyal for asking Punjab to facilitate the payment of MSP directly to the farmer.

Referring to the letter written by Piyush Goyal in which he had asked the Punjab government to “integrate the land records of Punjab farmers (available with revenue department) with the procurement portal,” Sidhu called the minister a ‘liar’ said that 24 per cent of farming in the state is on a contract basis, and these farmers will be deprived of payment if there is a system of direct payment.

Moreover, Sidhu alleged that the purpose behind this whole direct payment game is to quell the farmers’ protests. However, the fact is that the Government of India has been making efforts to implement the direct payment of MSP to farmers across India since 2012, even before the PM Modi-led NDA government came to power.

In the last few years, all states except Punjab and Haryana integrated land records of the farmers with the procurement portal of the Union government, and it boosted direct payment. But, the Punjab government, instead of taking steps to upgrade the land record, kept making excuses. In the last eight years, the successive governments led by Akali Dal and Congress could not update the land records while states like Bihar, Jharkhand, and Uttar Pradesh have completed the task. This reveals a lot about the inefficiency and rampant corruption of the Punjab government.

The Modi government has been reaching out to the Punjab government in a constant exchange of letters requesting for the system to be implemented and the land records to be maintained and revealed. However, the Amarinder Singh government has avoided this order, turning Punjab into an odd exception which is refusing pro-farmer reforms, and instead it has accused the centre of pushing for the implementation of this order only to spite ‘farmers’ who are protesting near Delhi. 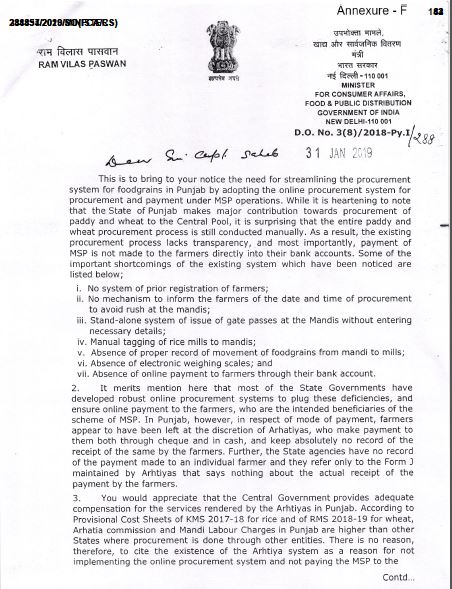 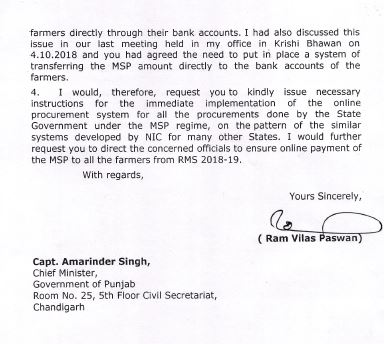 Despite repeated reminders and requests from the Department of Expenditure, Ministry of Finance in 2018 and 2019, the Punjab government gave the standard response of not being able to implement the system due to resistance from Arhtiyas and APMC Act provision for making payment through them.

Now the Piyush Goyal-led Ministry has stopped the payments through Arhtiyas and has asked the Punjab government to integrate the land records to the Anaj Kharid portal for the payments to continue.

“One of the apprehensions expressed by Government of Punjab is about the land which has been given on lease for tilling by absentee landlords may face title ship problem. In this case, the State Government can follow the procedure developed by the neighbouring State Haryana where the details of tenant/share cropper can be uploaded on portal with the disclaimer that this would not be a legal document for claiming ownership through tenancy. As has been emphasized time & again, it is essential to align existing system so that MSP benefits are passed on directly to farmers,” wrote Piyush Goyal in a letter (to Amarinder Singh) dated March 27, 2021. 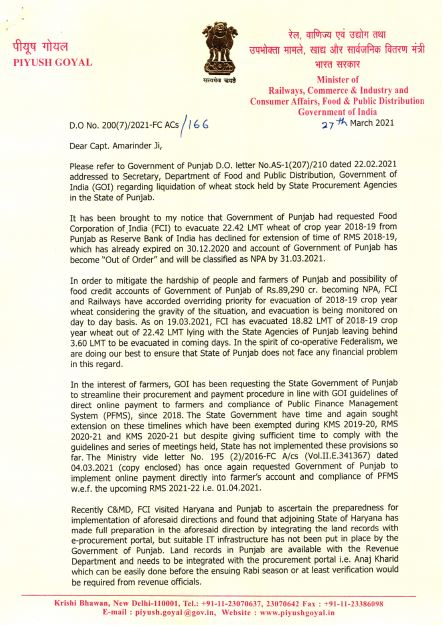 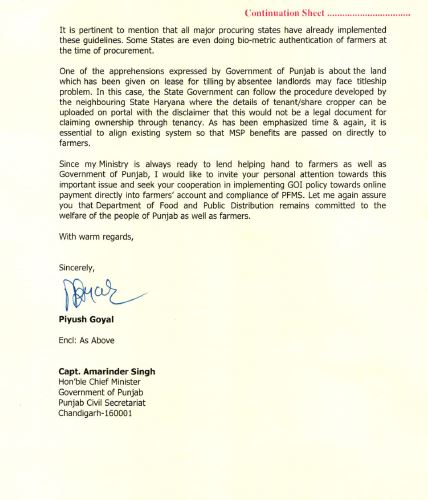 However, instead of integrating land records, Amarinder Singh wrote a letter to Prime Minister Modi on April 3 and asked for the continuation of payment through Arhtiyas. The shamelessness of the Punjab government, which has deployed motormouth Sidhu to rant against the Union government instead of completing the task of land records integration – which it has not been able to do in the last eight years due to inefficiency and corruption – is a major let down for the country and its farmers.

‘Will dig up the road and fire you if quality is substandard,’ Nitin Gadkari’s message to contractors