RSS chief Mohan Bhagwat is all set to release an Urdu version of his book ‘Bhavishya Ka Bharat’ with the title ‘Mustakbil Ka Bharat’ which is based on a series of lectures delivered by Bhagwat on 17-19 September 2018 at Vigyan Bhawan in Delhi. The 112-page book and its production for the Urdu demography population have been overseen by the National Council For Promotion Of Urdu Language (NCPUL).

Speaking to The Print, Dr Aquil Ahmad, the book’s translator and director of NCPUL said that the book is an attempt to “do away with the misconceptions Muslims have about the RSS”. 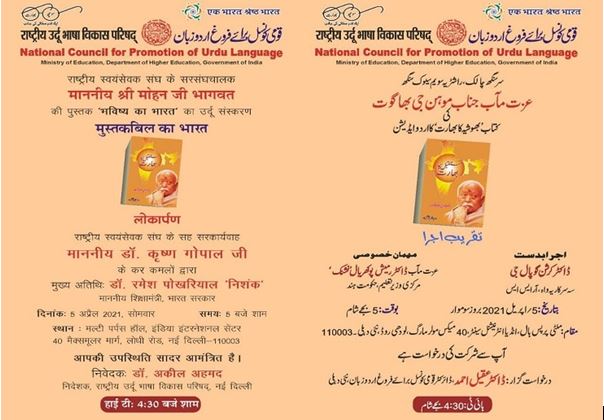 “The idea of Hindutva is incomplete without Muslims. This is what Mohan Bhagwat ji conveyed in his lectures in this book, that Hindutva is not Hindu religion, but the culture of India. He appealed to Muslims to read and be a part of RSS’ shakhas. For past couple of years, Muslim intellectuals are curious about the RSS. That is why we thought of translating this book, which explains the idea of India and our role in building the future of the country,” said Dr Ahmad.

The book is a compilation of the speeches made by Bhagwat where he touched on several topics ranging from the construction of Ram Mandir to Hindutva to castism and women issues. During his speech, Bhagwat said that everyone who resides in India and identifies as Indian is a Hindu.

“Hindu Rashtra does not mean there is no place for Muslims. The day it becomes so, it won’t be Hindutva. Hindutva talks about one world family,” he had said.

In recent times, the liberals and the pseudo-seculars amongst the Muslim community have constantly besmirched RSS for measly political gains. By misconstruing RSS’s core beliefs and ethos, whilst simultaneously asserting a negative connotation to the word ‘Hindutva’ — these anti-national forces have tried their level best to sink RSS. However, as seen during the COVID-19 pandemic, it is the RSS that has put its hands up, time and again, to come together for the welfare of the commoners.

Read more: ‘You are doing so much for the country,’ Muslim woman in Kashmir donates her Hajj savings to RSS

While the NCPUL director was wholeheartedly welcoming the publication of the book, some Urdu poets and ‘intellectuals’ had a hard time registering the reality. According to an Amar Ujala report, Majid Deobandi, an Urdu poet and former deputy chairman of the Delhi Urdu Academy, said, “This is a gross misuse of NCPUL’s funds, which aims to encourage Urdu with the help of writers and poets. A book that promotes the ideology of an institution is propaganda and is against the rules and policies.”

The book is simply aimed to help Islamic scholars and intellectuals of the Muslim community understand the ideology of the organisation better. Those opposing the release of the book reportedly fear that it will demolish decades of anti-RSS propaganda fed to Muslims.

Why Love Jihad is driving Christians of Kerala towards the BJP