At a time when the focus of states should have been to ensure that the weakest sections of society get hold of the help which the Central government is sending for them, the Maha Vikas Aghadi government of Maharashtra allegedly allowed thousands of metric tonnes of pulses to rot away and remain unused. If utilised, these pulses, which are now rotting away in shabby storage facilities, could have made life better for economically weaker sections of society during last year’s lockdown and the subsequent months when economic activity gained pace slowly. Yet, Chief Minister Uddhav Thackeray and his coterie’s priorities seem to be completely different.

Helping the poor is not half as important for the MVA government as intimidating journalists and extorting a monthly sum of Rs. 100 crores from Mumbai-based businesses is. Therefore, pulses and grains getting spoilt in gigantic quantities are not particularly concerning for the MVA government. BJP’s Mulund MLA, Mihir Kotecha, in a video put out on Twitter has exposed the massive wastage of Chana Dal/pulses in Maharashtra due to the administrative apathy of the MVA government. In the video posted by Kotecha, he says that the pulses that are now infested and spoilt have been lying unused since August-September last year. According to him, since October, 1,800 kg Dal have been spoilt in the said shop itself. In other places, 3,00,000 kg chana dal has been spoilt. This has resulted in Rs 180 crores worth of pulses going to waste in Maharashtra.

A closer look at the spoilage of pulses in Maharashtra reveals that the Uddhav government seemingly was never really interested in ensuring that the grains reach those in need. Only recently, the Modi government directed the Maha Vikas Aghadi government in Maharashtra to utilise the unused or leftover 6,445 tonnes of chana dal – allocated to the state last year under PM Garib Kalyan Ann Yojana and Aatmanirbhar Bharat initiatives. This direction came after the Maharashtra government finally, after months of delaying, submitted data pertaining to leftover pulses in the state.

Maharashtra Government delayed distributing pulses and made them rot in the state.

According to the Government of India memo, states were informed by the Centre on December 18 that they were required to submit details relating to leftover pulses distributed last year under the pro-poor initiatives. Maharashtra, however, kept delaying the submission and took four months to submit its data, causing additional wastage of pulses in the meantime. 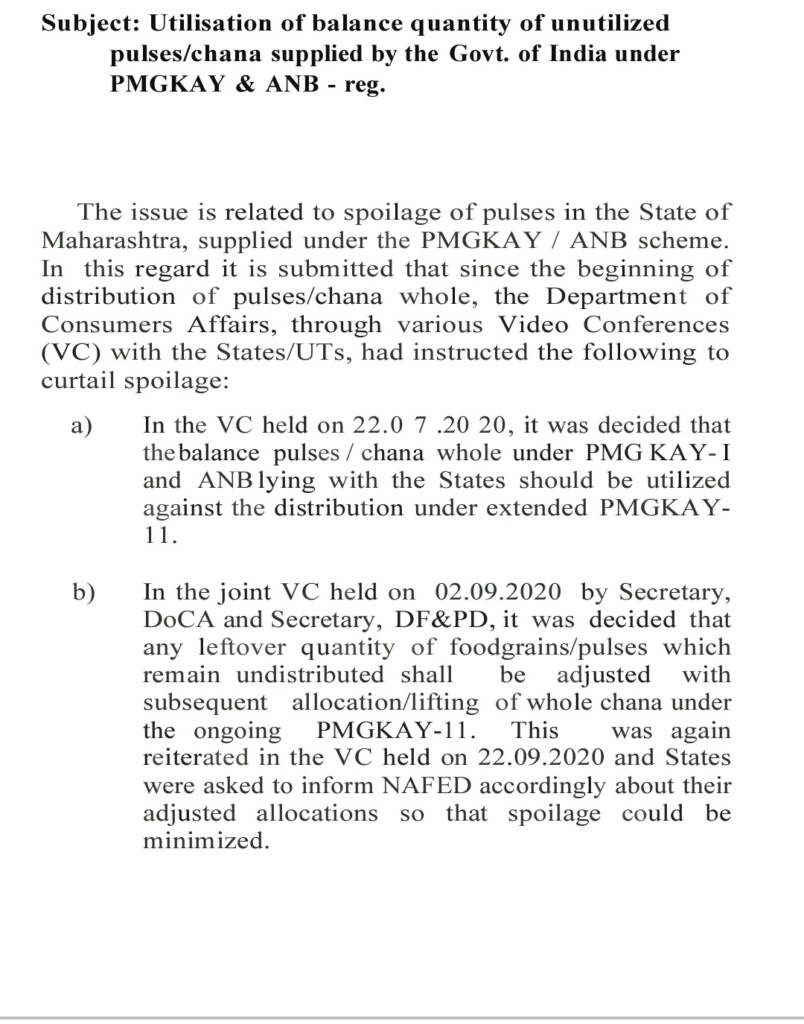 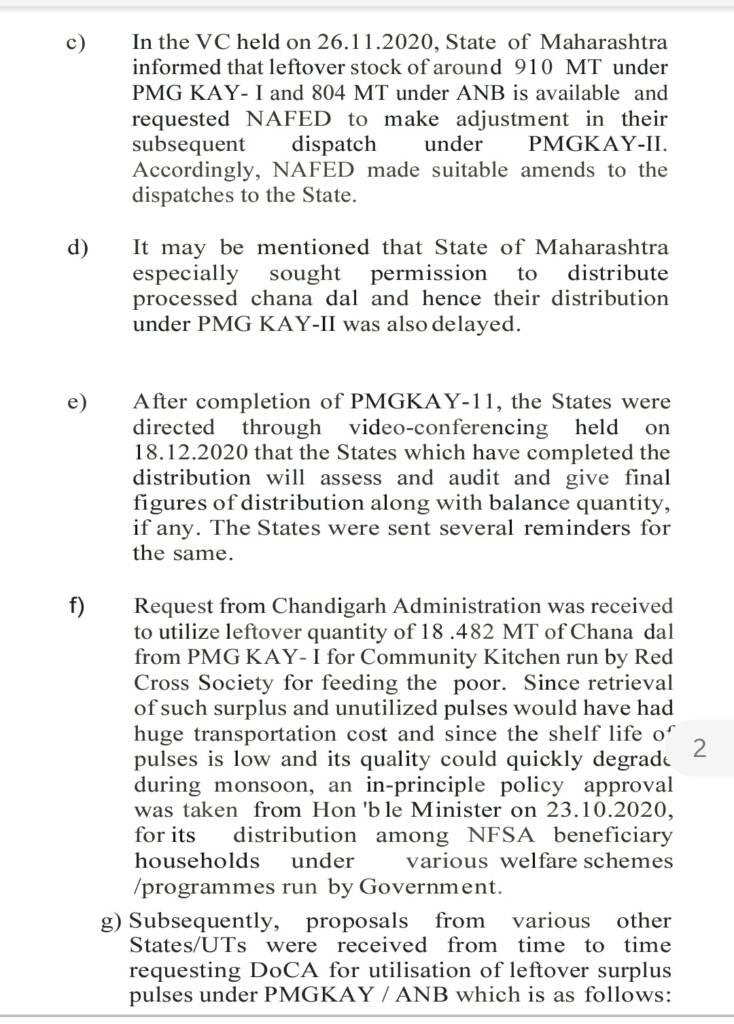 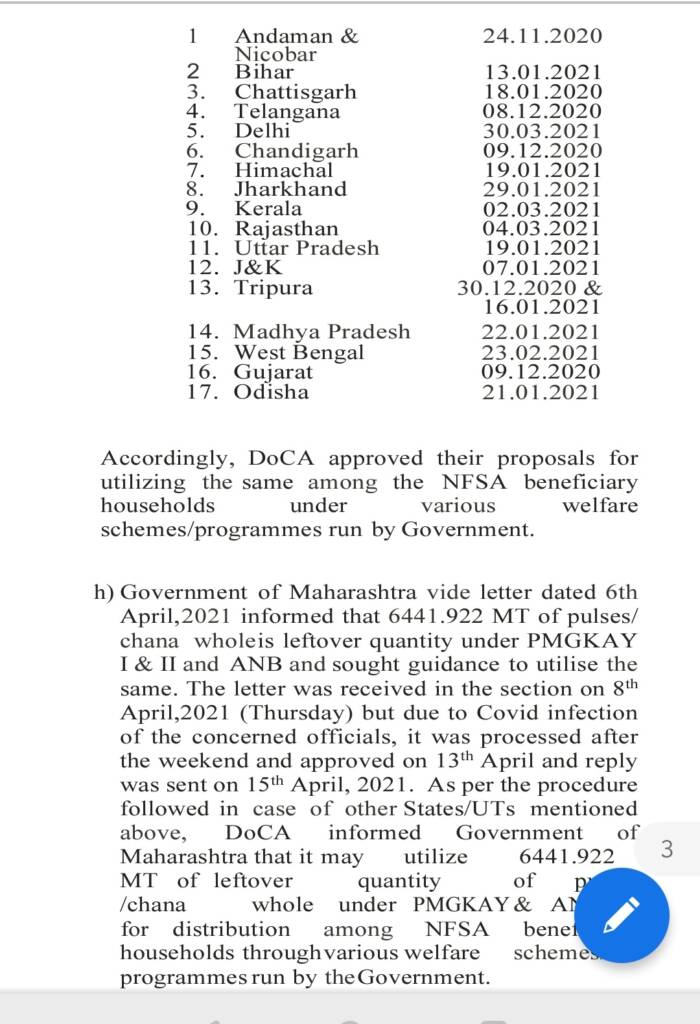 According to a GOI note, Maharashtra wrote a letter to the Centre on April 6 that over 6,400 tonnes of chana and chana dal were lying with it still unutilised. The note said, “While the Central government gave its approval to the other states to utilise the leftover pulses, Maharashtra was left behind, and not for the fault of the central government.”

The Maharashtra government is reportedly proving to be a disaster on all fronts – whether it be handling of the pandemic or ensuring that help meant for the state’s vulnerable and poor populations reaches them. The Uddhav Thackeray-led government seems particularly comfortable with the fact that a sea of pulses and grains is getting wasted on its watch.

The main motive of Lockdown 1.0 was to ramp up medical infra. Some states did it and some failed miserably