‘Would have got better opportunities, if he would have stayed’: Rahul Gandhi acts like a a jilted lover over Jyotiraditya Scindia

What does a jilted lover, dumped by his or her partner after a prolonged relationship, resort to? Crying, complaining, moral grandstanding, or all of it? Perhaps the latter. Usually, such individuals also take to comparing the status of their former partners on the scale of how well they fared while being in a relationship with those they chose to dump, as opposed to how they were being treated by their new companions. Of course, such a comparative study stems usually from being hurt and sad and becomes a mean for people to console themselves– that they indeed treated their former partners better than others. Rahul Gandhi, former and future Congress National President, is that jilted lover. BJP leader Jyotiraditya Scindia, who in March last year had called it quits from the Congress is now the prime target of the Gandhis, who are somehow trying to convince the new saffron-leader that his future in the Bharatiya Janata Party is bleak.

Congress itself deprived the Scindia-scion of bare minimum respect, authority and opportunities is a fact that Rahul chose to conveniently ignore. The BJP, on the other hand, gave a Rajya Sabha ticket to the Congress rebel soon after.

Yet, Rahul Gandhi, in order to console himself and all other hardworking youth members of the party who will as a fact not climb the hierarchical stairs of the Congress ever, took to saying, “He (Scindia) would have become the chief minister had he stayed with Congress but has become a backbencher in the BJP. Scindia had the option to strengthen the organisation by working with Congress workers. I told him — one day you will become the chief minister. But he chose another route.”

The former Congress president was further quoted as saying by ANI, “Write it down, he will never become chief minister there. He will have to come back here for that.” Rahul Gandhi also told the youth party workers to fight the ideology of RSS and not be “afraid of anyone.” He was addressing the party’s youth workers when he decided to unload himself of the guilt of being one of the main reasons behind Scindia’s grand exit from the Congress, which made the Kamal Nath-led Congress government of Madhya Pradesh fall. 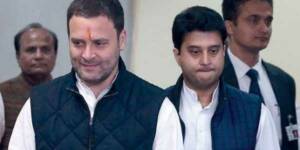 Jyotiraditya Scindia, while leaving the Congress, had minced no words, and told Sonia Gandhi via a letter that he was unable to work for the people while being part of the (Congress) party. “Having been a primary member of the Congress party for the last 18 years. It is now time for me to move on. I am rendering my resignation from primary membership of the Congress and as you well know this is a path that has been drawing itself out over the last year,” Scindia said in his letter.