by TFIPOST News Desk
in Opinions
7

In the last few weeks, several celebrities, activists, politicians, and NGOs from the West have come out in support of the farmers’ protests in India. Most of these people from the developed world, who have enjoyed sway over policies in the past, have been reduced to social media trolls because the Modi government trusts nationalists with policymaking, not the activists. And, this is the reason behind their frustration, evident these days on social media platforms like Twitter.

However, the fundamental question here is, why are these activists so miffed with the farm laws which seek to build a prosperous agrarian sector in India and have been lauded by serious policy minds (mind you, policy minds, not the activists) nationally and internationally?

With the three farm laws, the government of India seeks to liberate the agricultural sector from the clutches of bureaucrats and pressure groups, just as it did with the industry and services sector three decades ago. As a matter of fact, both these sectors witnessed a double-digit growth and so far the results have been encouraging. So, what exactly is the problem?

Well, the problem is that these reforms would make the agricultural sector in India more prosperous and a couple of decades down the lane, the farmers will no longer be controlled by these activists. In the last three decades, the agriculture sector of the country has become so competitive that Indians are eating up the jobs of the people in the United States, Canada, and Europe. The Indian companies now offer much better and innovative services at lower prices compared to that in the West.

Once agriculture is freed from the clutches of the activists, the sector will grow at double digits and India will no longer remain impoverished. Various researches have pointed out that agricultural growth of 1 per cent is three times more effective in poverty alleviation compared to industrial or services sector growth. China alleviated the majority of its population riding on agricultural growth because it opened the sector first, while India is opening it last.

However, activists, companies, and NGOs from the West know very well that once the sector is opened, it would be a double whammy to them because on one hand, they will be left with no constituency to push down their impoverishing ideas and on the other, their agri-processing companies would have to compete with the Indian ones.

Therefore, to end the competition even before it starts, the West has deployed a set of activists against India’s farm laws. The conspiracy of the West was exposed when Greta Thunberg tweeted a Google document which has all the details on the strategy to fuel the farmers’ protests and make it an international issue.

The Canada-based Poetic Justice Foundation, which runs websites like askindiawhy.com to spread the propaganda, was found to be one of the pro-Khalistani organisations which have been coordinating the strategy of protest. 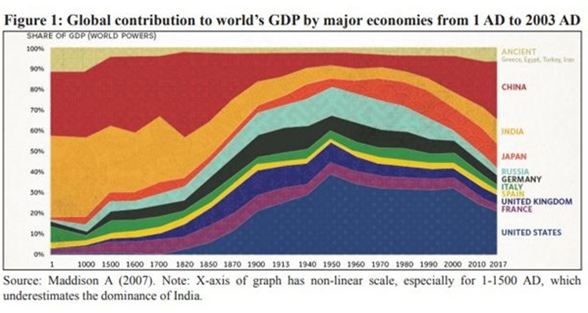 The Western nations are thus making efforts to deny India its right to become rich and alleviate its citizens out of poverty through a market economy, which the Indian civilisation has followed ever since its historical existence.

The Economic Survey of 2020 highlighted the celebration of Wealth Creation and outlined the philosophy of the government in the very first paragraph of the first chapter, which reads, “For more than three-fourths of known economic history, India has been the dominant economic power globally. Such dominance manifested by design. During much of India’s economic dominance, the economy relied on the invisible hand of the market for wealth creation with the support of the hand of trust. Specifically, the invisible hand of markets, as reflected in openness in economic transactions, was combined with the hand of trust by appealing to ethical and philosophical dimensions.”

On the other hand, many individuals from Europe and the West have been awarded for their contribution to free-market economics. Even eight members (Friedrich Hayek, Milton Friedman, George Stigler, Maurice Allais, James M. Buchanan, Ronald Coase, Gary Becker and Vernon Smith) of Mont Pelerin Society (MPS), a classic liberal organisation have won Nobel Prize in economics.

The intentions and ulterior motives of the activists have been repeatedly exposed but a class of Indian society would rather seek the acceptance of activists from the West over India’s national interest and this is the reason they have been amplifying their views in the recent months.

Delhi’s LG to get more powers, Kejriwal set to be reduced to a quarter CM from half CM