While the Left and its associates around the world were having a great laugh witnessing the international besmirching of India’s name, a grand conspiracy, most likely fuelled by millions of dollars has now been exposed. Whether it be pop star Rihanna tweeting in support of the fake farmers, or the celebrities and ex-porn stars who took a cue from her and took to voicing their support for the violent demonstrations against the Modi government in India, it all seems to be running on a flowered bed of money. And who brought to light the said conspiracy? No other than climate vigilante and wannabe activist Greta Thunberg.

In a tweet, which we think was made by the teenager mindlessly, because after all, she is a kid at the end of the day; Greta ended up sharing an entire “Google toolkit” which intricately describes the global campaign being waged against India. The tweet was deleted by the environmental fascist soon, however, the damage to the grand conspiracy had been done by them. It took some time for Indians to go through the extravagant documents, and by late Wednesday evening, it became clear that India and the Modi government was being made a victim of a grand multimillion dollar conspiracy operating out of foreign nations.

As a part of the conspiracy, it soon became clear that pop star Rihanna did not tweet in favour of the ‘farmers’ due to a sudden shake-up of her sleeping conscience, but because she was perhaps paid a large sum of money for triggering a worldwide Twitter campaign against India. The toolkit shared childishly by Greta Thunberg, in the “suggested posts” section has many examples of how people should use Twitter to further their fallacious propaganda against India. One of the examples, incidentally, is that of Rihanna – with a generic line, “Why are we not talking about this?” Also attached in the example of a tweet by Rihanna is a CNN link of the farmers’ protest. The said document is said to have first been published after January 20. Rihanna’s tweet regarding the protests came on February 2. Effectively, the popstar with over 100 million followers on Twitter copied an entire suggested tweet from the Google toolkit verbatim!

If this "Google toolkit" showing an international conspiracy to defame India is anything to go by, @rihanna's tweet was fixed much before it was posted, along with the article she was supposed to post. The foolish lady copy pasted a suggested post itself? pic.twitter.com/nOwBmhn6vM

So, an entire campaign was launched against India internationally, based on a reportedly paid tweet which was made by Rihanna with zero knowledge about the issue she was speaking about, which is why she took to copying a suggested post from the toolkit verbatim. Now, coming back to the masterstroke of Greta Thunberg, which has led to an entire conspiracy against India being exposed. What if we told you that the rioting on the streets of Delhi, and the entry of anarchists masquerading as farmers was pre-planned? Well, that is precisely what the document shows. 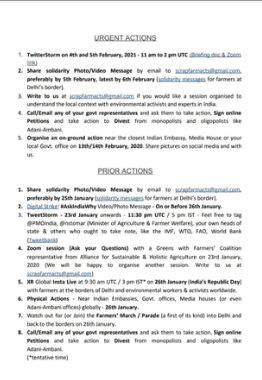 As can be seen from point 7 of the ‘Prior Actions’ portion of the document, it reads, “Watch out for (or join) the Farmers’ March/Parade (a first of its kind) INTO Delhi and back to the borders of 26th January.” This effectively proves that the Republic Day rioting on the streets of Delhi was pre-planned and internationally orchestrated. The handlers of such anarchists sitting abroad knew very well that the ‘farmers’ would enter Delhi, despite not having requisite permissions to do so.

On the same day when ‘farmers’ were rioting in India’s national capital, the Indian embassy in Rome, Italy was attacked and the Khalistani flag was raised therein. A day later, Khalistani supporters held a protest outside the Indian embassy in Washington DC in support of the protest against farm laws in India. Now let us take your attention to point 5 of the “Urgent Actions” portion of the document, where it is suggested that “on-ground actions near the closest India embassy or media house” be organised. Apart from such physical demonstrations, the document also reveals how the global activists planned social media storms previously, and how on February 4 and 5 too, the same social media blitzkrieg is planned. 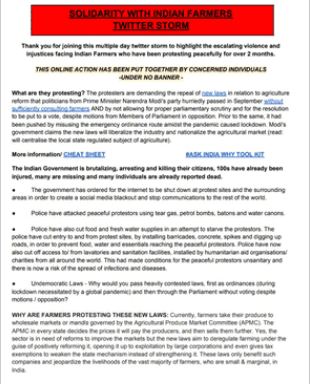 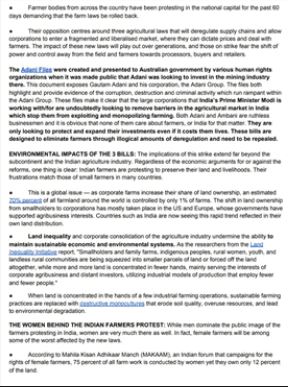 The toolkit opens up with blatant lies, of course. For how else does one get braindead zombies to flock the roads and social media platforms all over the world in opposition to the Modi government? For this very reason, the document falsely states that the three farm reforms were passed unconstitutionally by the parliament of India, that police forces have used brute force on ‘peaceful protestors’ and that farmlands will be usurped by big corporate houses, two of whom have been named in the document.

Upon being exposed, Greta Thunberg quickly deleted her tweet, and a misinformation factory got to work editing the google document to make it look less criminal. Meanwhile, Twitter CEO Jack Dorsey has been caught liking anti-Modi government tweets, which no less than say that “Rihanna has the Indian government shook” and that she does not need to release an album as long as she can “lift the oppressed”.

Oh look. The giver of blue ticks. The upholder of free speech. And the guy who deleted President Trump, the world's biggest political leader on Twitter at the time. He's one of those who have a wild card against democracy & now he is looking at India, and Modi. pic.twitter.com/gZSSAXU7yl

It is thus evident that a grand conspiracy was hatched around the world to defame India, and celebrities and influencers were roped in for besmirching our country’s name globally. However, Greta Thunberg single-handedly destroyed the plans of vested interest groups who are behind such conspiracies, and Indian nationalists too drew the line, and seamlessly exposed anti-India haters frothing in their mouths to shame India.

India hawk Gen. Bajwa goes on his knees to appease India but Pakistan won’t get vaccines in any case