by TFIPOST News Desk
in Economy1
2

A few months ago, the Modi government banned Chinese video creation app TikTok for National Security. The move was appreciated by policy enthusiasts because given the fact that the Chinese are sitting on our borders, it makes no sense to give sensitive user data to Chinese companies. Moreover, the government floated ‘Aatma Nirbhar Bharat’ policy to deal with the rise of protectionism in the global order. 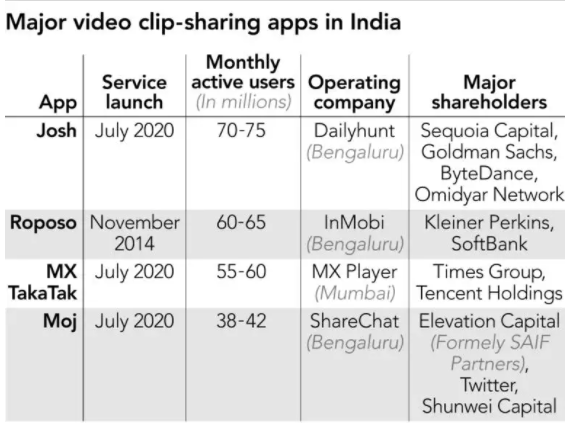 However, amid all this, guess who backs the companies that replaced TikTok in the short video-app genre. All four major players in the short video app genre are backed by foreign investors. Josh, operated by Bengaluru based DailyHunt, is backed by California based Sequoia Capital, New York-based Goldman Sachs, and China-based ByteDance. Roposo, the second most popular app in the short video genre, is backed by California based Kleiner Perkins and Tokyo based Softbank. MX TakaTak and Moj, which occupy the third and fourth position respectively, are also upheld by China-based Tencent Holdings, and the US-based Twitter.

Therefore, except Times Group and Omidyar Network, almost all the major investors in these companies are either China-based or United States-based.

The United States-based Tiger Global management has an investment in almost every second or third major startup in the country. The startups in the edtech sector like BYJU’s and Unacademy have significant investment from foreign firms, and many companies in the online media sector like Inshorts too have a significant foreign investment.

“Basically institutionalised transfer of wealth away from India while living off the Indian market and Indian labour somewhat like the days of the Company rule,” he added.

In the long Twitter thread, Bikchandani also explained how foreign investors are taking over the ownership of Indian startups. “You take an Indian startup and transfer ownership of all its shares to an overseas company that has been usually freshly floated just for this purpose. So now the Indian company becomes a 100% subsidiary of the overseas entity,” he revealed.

In future, the value creation that will happen in these companies will go to foreign investors. “Believe a lot of future value creation will happen from startups that have flipped. Not saying ban flipping, create conditions to disincentive flipping,” warned Bikchandani.

In fact, the royalties have gone so high that in August this year, Commerce Minister Piyush Goyal asked these companies to cut royalties to boost investment in India.

In future too, the internet startups would also either transfer whole profit to parent companies or transfer a significant part of it in the form of royalties. Therefore, the Modi government must act to bring foreign investment in Internet startups down and also institutionalize the seed funding so that startups need not run to foreign companies for capital.

By pitting Punjab farmers against those from rest of India, Khalistani elements are making them enemies of each other

Barelvis and Khadims clash: “Maulvi sponsored radicalization is a termite to Islam

UNSC Row: Time for China to choose between Competition and Cooperation with India