Manufacturing up. Domestic demand up. Exports up. Indian economy is recovering at breakneck pace

by TFIPOST News Desk
in Economy1
1

This October has been the best month for the Indian economy post-Covid. Demand, supply, exports- all shot up exponentially as the festive season hits the country. From April to September, the first half of this fiscal year, the companies witnessed one of the worst phases as the country was under the stringent lockdown for most of the period. But as the economy opens up, the pent up demand is being reflected and the second half of the fiscal year is expected to be best for India Inc.

IHS Markit’s Purchasing Manager Index, a reflection of manufacturing activity in the country, reached 13 years high to 58.9 in October. Manufacturing PMI was positive even in the previous month when it recorded a figure of 56.8–any reading above 50 shows expansion compared to the previous month. 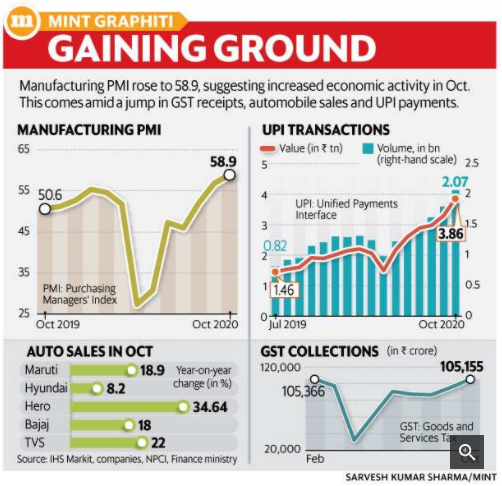 The demand picked up across the sectors as people invested their savings during the lockdown to purchase goods and services. The e-commerce companies, Flipkart and Amazon, sold goods worth 4.1 billion dollars in the festive sales. Amazon’s ‘Great Indian Festival’ and Flipkart’s ‘Big Billion Days’ fell around the same time and both companies registered massive growth over the sales figure for the last month. Apple India posted record sales with 8 lakh iPhones sold in the country in the July to September quarter, which is highest ever in a single quarter.

Also, the automobile sector, which suffered massive losses during the pandemic, is on the path to a quick recovery. Hero Motocorp, the largest two-wheeler player, registered a growth of 35 per cent in October, that is, up to 8.06 units. “With the higher dispatches during the month, the company’s customer touchpoints across the country now have adequate inventories in line with market demand in the ongoing period,” it said.

Even the sale of four-wheelers registered double-digit growth, with two major players Maruti Suzuki and Hyundai, being the top players. These companies increased the market share as most new buyers went with tried and tested products amid the pandemic.

Moreover, India has come out of the losing streak to register 5.27 per cent growth in exports in September. The country exported goods and services worth 27.4 billion dollars in September this year which is 5.27 per cent more, compared to last year, said Minister of Commerce and Industry, Piyush Goyal.

So, as the country opens up, the economy is picking up across the board and the pent-up demand is also being reflected from the latest purchases. Many consumers who saved money during the lockdown on various expenditures are now spending money on big-ticket purchases, and this will lead to a good performance of the economy in the next quarter.