If Trump were not US President, Global Media would have given a clean chit to China on its Coronavirus coverup

China’s lies have taken millions of lives around the world and have shown a dramatic increase in anti-china sentiments. But, would this have been possible, had it not been for the United States President Donald Trump? Had it not been for the US President, China would have gone scot-free and would have also been able to secure undeserved sympathy to go along with a pre-mature acquittal.

Still early into the Pandemic, left-liberal American media outlets like NYT and Washington Post were more concerned about whether the term ‘Chinese virus’ is racist or not; rather than asking tough questions to China.

NYT, in particular, seemed sympathetic to China. For instance, one of its stories was titled, “China Bought the West Time. The West Squandered It.” 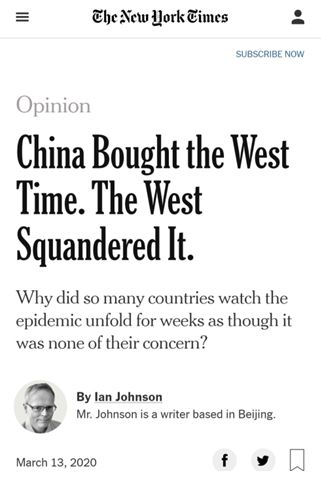 While commiserating with China, NYT also interviewed Dr. Bruce Aylward of the World Health Organisation (WHO). The conversation was published with the headline, “Inside China’s All-Out War on the Coronavirus.” The WHO official, Bruce Aylward, widely accused of being extremely biased towards China mounted a desperate rebuttal for China. 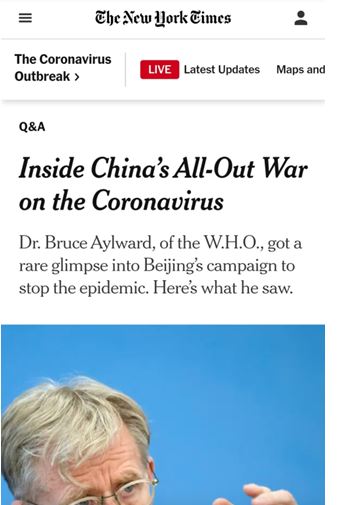 However, it was Donald Trump who brought up the issues of lack of transparency in China’s handling of the Coronavirus Pandemic. Trump referred to Coronavirus as the “Chinese virus” and directly held it culpable for creating a global Pandemic. Had it not been for Trump, the American media or other global liberal media which essentially picks up its ideas from the American media would have never held China accountable.

Read: Fear of China makes WHO official Bruce Aylward act like a deaf & forgetful 90 year-old the moment he’s asked about Taiwan
Read: ‘You can’t escape from us,’ Canada issues mandatory summons to China-loyalist WHO official who refuses to testify

Even when Trump went hammer and tongs after China, it was the US President who faced a systematic campaign from the American liberal media. When Trump started using the word “Chinese virus”, the American media went up in arms. 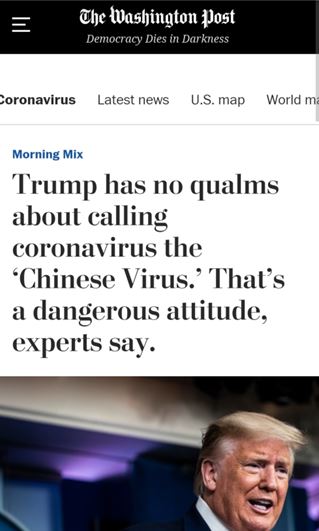 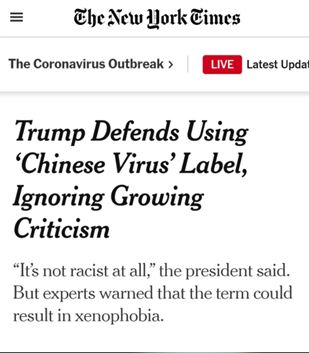 Niha Masih, India Correspondent, Washington Post had started blaming Indians too. She had tweeted, “Shame on everyone in India tweeting on #coronavirus as #ChineseVirus19. It’s racist and nasty.”

Trump was bullied by the American media even during press conferences. But Trump didn’t relent. When he was first cornered over the terminology by a reporter, Trump replied, “It’s not racist at all,” Trump said when asked if he felt it promoted racism or xenophobia. Explaining his rationale further he said, “It comes from China, that’s why.”

Trump has no second thoughts about holding China culpable despite fervent opposition from American media. Weijia Jiang, a White House correspondent for CBS News asked, “Why is this a global competition to you if every day Americans are still losing their lives, and we’re still seeing more cases every day?”

The US President, however, had no qualms about cornering China when faced with hostile questions about the US making it a “global competition”. The US President had replied, “Maybe that’s a question you should ask China.” He added, “Don’t ask me. Ask China that question, OK?”

Later, Trump had also refused to take a question from a CNN White House correspondent, Kaitlan Collins, who had allowed Jiang to ask Trump follow-up questions.

To some extent, the liberal American media had been able to weave a sympathetic narrative for China by calling Trump a racist. The Democrats were also trying to pick it up from there.

Nancy Pelosi, Speaker of the United States House of Representatives too encouraged public gatherings in San Fransisco’s Chinatown to ‘end the discrimination’ against the Asian Americans. Yes, public gatherings when the entire world was looking at social distancing.

Make no mistake; holding Beijing accountable wouldn’t have been possible had Trump not stood up to Chinese misadventures. Otherwise, American liberal media would have made a victim out of China. Even Worse, Beijing would have been able to succeed in its propaganda war of labelling itself as the world’s saviour. Ravaged by the pandemic and struck by a recession, the world would have become a vulnerable hunting ground for the expansionist CCP regime.

But Trump’s relentless campaign saw other governments like Australia, India, Japan, the UK and Canada speak up against China. Consequently, China has the most hated regime on the planet today. A desperate American liberal media has thus failed to protect the Communist Party of China.

By rejecting American leadership on China, Germany wants to bring back its pre-World War reputation

Back in the game: Emboldened by Chinese backing, Iran steps up aggression against US

A free and fair Election Commission scares regional satraps, and now they are trying to take it down