A shadow banking crisis was brewing in China for the last few years and with the discovery of the biggest gold counterfeiting scandal in human history, this might blow up in the next few days.

Kingold Jewelry Inc, China’s largest privately-owned gold processing and jewellery company headquartered in Wuhan, took a loan of more than 20 billion Yuan (2.8 billion dollars) with 83 tons of pure gold as collateral. But, when the shadow banks claimed the pure gold after the company was unable to pay back, they found that what the company claimed as pure gold is actually gilded copper.

The fake gold came to light in February this year when Dongguan Trust (one of those infamous Chinese shadow banks) set out to liquidate Kingold collateral to cover defaulted debts.

In late 2019 Kingold failed to repay investors in several trust products because it lost billions of dollars in China’s housing bust. China built many ghost cities when there was no demand for housing in the country. When a manufactured demand was being created; several companies like Kingold invested billions of dollars in the housing sector by taking loans from shadow banks with counterfeit gold as collateral and now unable to pay back due to the crash of the housing prices.

The news of counterfeit scandal sent shockwaves through Kingold’s creditors. China Minsheng Trust – another shadow banking company and one of Kingold’s largest creditors – obtained a court order to test collateral before Kingold’s debts came due. On May 22, the test result returned saying the bars sealed in Minsheng Trust’s coffers are also copper alloy.

The collapse of the shadow banks will not only hurt the banking sector but the insurance sector, too. The loans given to companies like Kingold are secured by state-owned People’s Insurance Company of China and other small insurers, and therefore, the insurers are set to suffer massive damage. 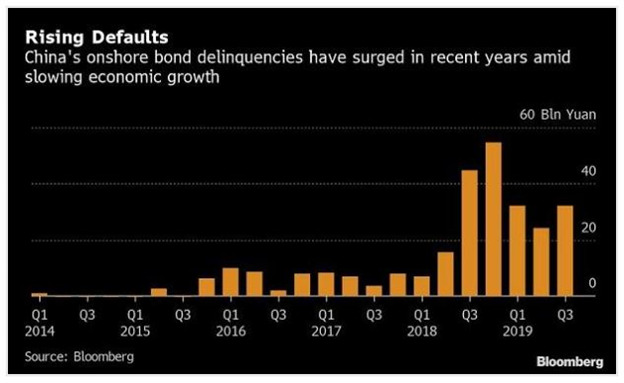 The cascading effect would lead to the collapse of China’s financial sector which is already under stress due to rising defaults. “I wouldn’t be surprised to see some losses,” said Jasper Yip, Hong Kong-based principal of financial services at Oliver Wyman, a consulting firm. “More borrowers will run into payment difficulties in a slowing economy.”

As for the gold, several billion in gold bars never existed and yet resulted in a cascade of subsequent cash flow events allowing tens of billions in funds to be released, “benefiting” not only founder Jia, but China’s broader economy.

This is terrifying because whereas just after the financial crisis China was engaged in building ghost cities; everyone knew these were a symbol of demand that would never materialize, even if the cities themselves did exist. However, it now appears that a major part of China’s subsequent economic boom has been predicated on tens of billions in hard assets — such as gold — which simply do not exist, the report said.

Kingold is certainly not the only Chinese company engaging in such blatant fraud, and the consequences are clear: once Chinese creditors or insurance companies start testing the “collateral” they have received in exchange for tens of billions in loans and discover, to their “amazement”, that instead of gold they are proud owners of tungsten or copper, they have two choices: reveal the fraud, risking tremendous adverse consequences and/or prison time, or quietly buy up all the gold needed to literally fill the void from years of gold counterfeiting.

In conclusion, China’s 3 trillion dollars shadow banking industry is set to get a reality check in the next few days, as the whole counterfeit collateral unravels. As most of the loans by shadow banking companies went to the real estate sector which are unable to pay back, more and more companies would go to claim collateral- which never existed. 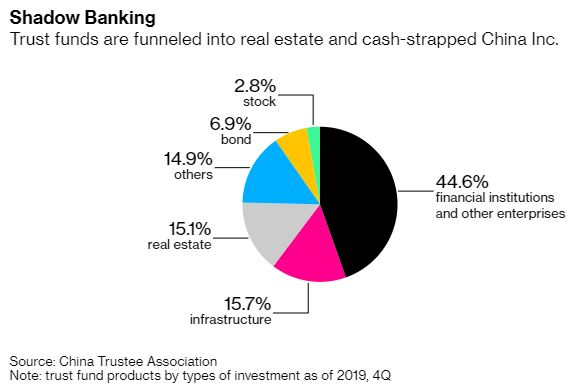 “Borrowers behind the trust products are those with a higher risk,” said Yang Hao, an analyst at Nanjing Securities. “It represents the most vulnerable part of corporate financing and when a crisis comes, this is the first link to go awry.”

Therefore, the Chinese economy is set to suffer a big jolt in the next few days, shockwaves of which would be felt around the world, thanks to China’s counterfeit culture and forced demand creation.

Over 5 million could flee to UK: Hong Kong is set to witness a mass exodus of its citizens

Eye on China: With 40% spike in defence spending, Australia seeks long-range missiles for the first time