The decline of Diesel cars: Why no one is buying diesel cars in India

Diesel engine vehicles, which had a near-monopoly in the Indian markets, have witnessed a rapid decline in the last few years, at least in the passenger vehicle segment. A few weeks ago, the price of diesel overtook that of petrol in Delhi, and this led to a debate around both fuels on social media. Diesel engine vehicle vs Petrol Engine vehicle once again took over social media and mainstream media, and this time petrol looked a clear winner. 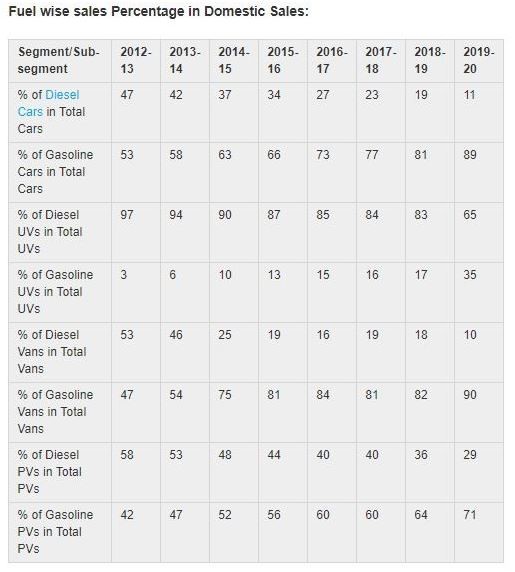 Also, the government has brought taxes on both fuels almost equal; earlier the tax on diesel used to be significantly lower than that on petrol- which will now further discourage the purchase of diesel engine cars.

Even Mahindra and Mahindra, the largest manufacturer of diesel engine vehicles in the country and a long-time advocate of diesel fuel is planning to offer petrol vehicles in the PV segment. “What happens post BS-VI is a question that everybody asks. I have said that for small SUVs, and small cars, probably there will be a significant switch towards petrol, but for large SUVs, I think it will be diesel,” said Pawan Goenka, Managing Director of Mahindra and Mahindra.

But, the catch here is, India is not the only country which is progressively phasing out diesel vehicles. Many countries have set up a target year to completely ban diesel cars.

The United Kingdom, one of the largest markets for diesel cars, is planning to push all types of diesel cars off the roads by 2040. France would also follow the suit and has set up the same target year to phase out diesel cars. Germany, the largest manufacturer and one of the largest consumer of diesel engines is planning to phase out fossil fuels based vehicles altogether. “I cannot name an exact year yet, but the approach is right because if we quickly invest in more charging infrastructure and technology for electric cars, a general changeover will be structurally possible,” Angela Merkel, Chancellor of Germany, told a tabloid.

Germany was at the centre of scandal which led to the acceleration of the government’s push towards put diesel cars off the road. Volkswagen emission scandal- which revealed that Germany based manufacturer fits a cheat device in the cars to meet the environmental emission standards, has brought the focus of the authorities towards the vulnerability of diesel engine cars.

China and Japan- two of the largest manufacturers and consumers of cars are also planning to phase out diesel cars by 2030.

In India, the government discriminated against petrol cars by keeping taxes on the fuel high because petrol cards were being used primarily by urban consumers. Diesel, which was used by rural consumers for PV as well as various other functions like running tube wells, tractors, etc, received relatively lower taxes. But, in the last few months, the government brought the taxes on both fuels on the same scale which led to approximately similar prices. And this would further lead to the end of diesel cars, even if the government does not impose a target year to phase out the same.

1% of designated castes take more than 50% of the benefits: Why Reservations do not work for most castes

China may have flooded Wuhan to stop WHO investigation, but with US funding gone, it is do or die for WHO