‘Please enlist us at your stock exchange,’ Chinese companies look towards Hong Kong. But that is not by choice

The Chinese technology companies, which expanded exponentially across the globe in the last few years, are suffering unprecedented backlash since the outbreak of the Coronavirus. Donald Trump pumped up his anti-China rhetoric, and he is taking back to back decisions to punish China.

US blocks access of Chinese companies from its stock market 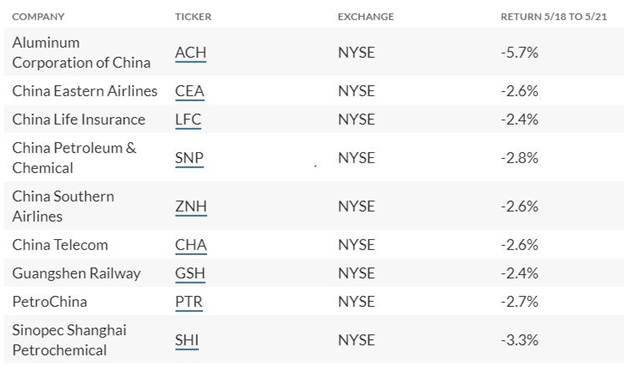 Trump has further asked his advisors to prepare a comprehensive plan on the actions he could take on the American stock exchange-listed Chinese companies, calling them “significant risk for investors.” The actions would hurt China’s state-owned companies, like those listed in the image above, most; but the private companies, like Alibaba, JD.Com, and Baidu, are also scared of Trump’s rhetoric, and are seeking a secondary listing in Hong Kong Stock Exchange and London Stock Exchange.

The alternatives to Chinese companies to access the global human and financial capital are the London Stock Exchange and Hong Kong Stock Exchange.

With London, the positions have reversed

The Chinese government has enjoyed a peculiar relationship with LSE in the last few months. Last year, when the relations between London and Beijing were sweet, the Chinese communist government approved a link between Shanghai Stock Exchange and London Stock Exchange, but, in January this year, the Chinese suspended the link for “political reasons”- probably Brexit. However, that was before the outbreak of Coronavirus, when Beijing had the upper hand in negotiations.

Now, all three major sources of capital- NYSE, NASDAQ, and HKSE – to Chinese companies are limited due to Trump’s action and political instability in Hong Kong. So, the Chinese companies are left at the mercy of London Stock Exchange for access to global capital. Therefore, Beijing, which suspended the link between LSE and Shanghai stock Exchange a few months ago, has approved the plan of China Pacific Insurance, a Chinese state-owned company already listed in Shanghai and Hong Kong, to sell securities in London, on June 3, and revive the link.

Hong Kong is the only capitalist refuge for Chinese companies

With not many options left for Chinese companies, Hong Kong is the only refuge, but the city is under political turmoil, and could soon lose free access to the US dollar

As per a report by CNN, the Chinese companies facing push-back from Trump administration are now seeking refuge in Hong Kong. Most of the technology companies, for whom it is easy to list on multiple stock exchanges, have proposed Hong Kong Stock Exchange for a secondary listing.

But, the problem with Hong Kong is that it is under huge political turmoil. Although it still has access to the US dollar and is relatively free compared to mainland China, but the Chinese government is increasingly asserting its control. Many western countries including the United States have already said that they would no longer continue the preferential treatment of the erstwhile autonomous city, as it is now under Chinese control.

Therefore, given the increasing restrictions on Hong Kong, it is entirely possible that the Chinese companies might list in HKSE, but still have no access to global capital because Hong Kong loses preferential treatment from Western countries.

It was Amul vs Twitter over China and TikTok. Twitter won initially but Amul had the last laugh