‘Modi will rain money from a helicopter,’ News channel Public TV gets into serious trouble for fake news

Fake news is risking lives in this lockdown

The fake news and rumor-mongering in the wake of the Wuhan virus pandemic is reaching bizarre heights now. Earlier this week, a Kannada news channel Public TV ran a special episode on its network claiming the central government under PM Narendra Modi has come up with an initiative of ‘Helicopter Money’, by which money will be airdropped from helicopters to every village to combat the economic slump in the country orchestrated by the Wuhan virus pandemic.

Press Information Bureau Additional Director General Nagendra Swamy was miffed by channels irresponsible behavior and questioned the news channel as to why it was spreading false information, creating panic and social unrest when the whole country is fighting the Wuhan virus. 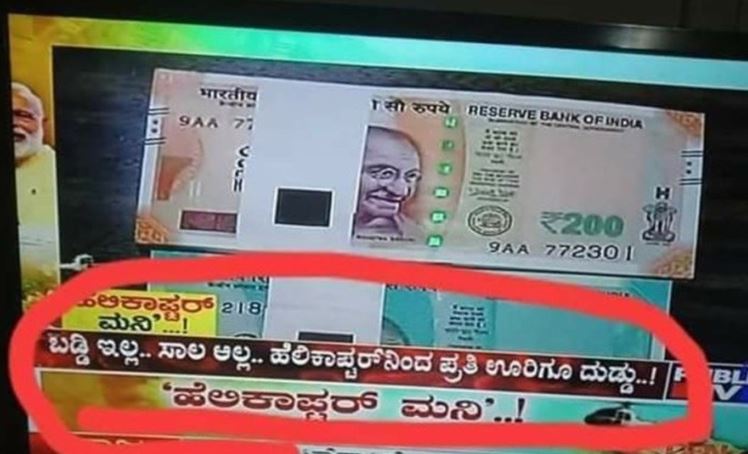 “That programme said Modi will drop money from a helicopter. It was totally misleading and so many people in the villages are waiting and sitting outside,” he told IANS.

A notice has been served to the television channel and it has been asked why it should not be taken off the air. The ministry has given the channel 10 days to reply.

“On April 15, 2020, your news channel Public TV broadcast an item, Helicopter Money – ‘Helicopternalli surithara Modi’ at 8:30 p.m., which is false, mischievous and deliberate and clearly violates the broadcasting code and rules,” the notice read.

It is not the first fake news to be propelled within a week–Live Hindustan too had published grossly misleading reports about the resumption of rail services. It published a story dated April 10 that claimed that trains were ready to start running again from April 15, if a go-ahead comes from the top political leadership.

The report even claimed that the rail administration had forwarded the train running schedule to all employees, including drivers, guards, managers, and ticket-checkers.

It did not stop here and further claimed that all the 17 zones were instructed to remain prepared for restarting operations for all kinds of trains, that is, the long-distance passenger trains as well as the local trains immediately after the 21-day lockdown.

The horror show of a gathering that had happened on 14 April at the Bandra Railway station was also a result of fake news.

The misleading report by Rahul Kulkarni—an ABP Manjha Journalist ‘played a part in the rumour mongering’ that led to nearly 2,000 alleged migrant workers assembling in Bandra despite a nationwide lockdown in the country.

The police said that the video report was incorrect while arresting Kulkarni under various sections of the IPC and the Epidemic Act 1897. Although he was later granted bail, the damage had already been done.

At a time when we are grappling with one of the most unprecedented challenges of our times—fighting an invisible enemy, one-billionth the size of human tooth and nail and yet coming short, the fake news industry is not helping the case any further. The journalists’ and news networks need to shoulder greater responsibility during these trying times and should not chase ratings by airing sensational yet unverified news.

‘Made in China is trash,’ China’s PPE diplomacy boomerangs as world starts to reject Chinese products

‘640 attended congregation in Nalanda,’ Bihar is sitting on another Tablighi time bomb, suspects still at large

After Bharat Biotech’s Covaxin, India is coming up with another indigenous vaccine by Zydus Cadila

From an Olympic medalist to an alleged criminal at large, the fall of Sushil Kumar