‘Made in China is trash,’ China’s PPE diplomacy boomerangs as world starts to reject Chinese products

Made in China has become infamous across the world

The Coronavirus Pandemic is turning out to be a disastrous PR for China, and even the propaganda war that it had waged doesn’t seem to be bailing it out. Initially, it was only China’s faulty testing kits that were being rejected across the world, but now even Chinese PPEs and masks are being rejected for their poor quality.

As soon as the Pandemic started having repercussions across other parts of the world, China started playing down its numbers and a massive coverup was orchestrated so that it could go into an overdrive producing masks, PPEs and faulty testing kits.

What China was planning was a massive propaganda war to project itself as the saviour of the world with even its conglomerates coming out to medical gear to other countries. China sold nearly four billion masks to other countries last month despite serious allegations of fundamental flaws in its medical supplies. 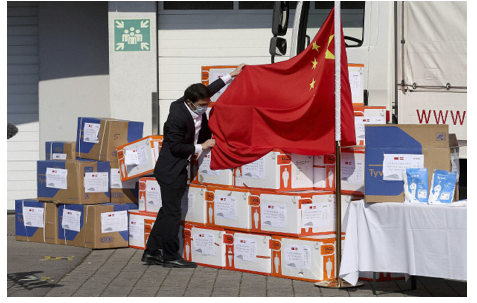 This photo of a man adjusting the Chinese flag in front of a pack of boxes containing protective suits and masks in Vienna, Austria is an indicator of how Beijing has been aggressively pushing its PR campaign.

But the Chinese PR campaign is now clearly falling apart. For starters, the world doesn’t really buy Beijing’s downplayed numbers and whatever euphoria its State media had built about China’s experience of tackling the Pandemic has certainly subsided.

In fact, China itself seems to be admitting that it had downplayed the numbers, with the epicentre of the COVID-19 in China’s Wuhan increasing the number of recorded deaths by as much as 50 per cent with 1,290 more deaths. The total confirmed cases in the city of 11 million people has also been increased by 325 to 50,333, accounting for about two-thirds of China’s total 82,367 announced cases.

In a social media post, Wuhan city’s government updated the figures and in a rather quizzical manner admitted that there were many cases that were “mistakenly reported” or missed entirely, reported WION. What this admission does is to strongly discredit the country’s version of its experience in combating the novel Wuhan virus.

Meanwhile, its medical supplies continue to get rejected all across the world. Spain and the Czech Republic were the first cases of countries exposing China’s faulty supplies and rejecting them.

Health officials in the Czech Republic and Spain had reported that the Wuhan virus rapid tests their respective countries received from China were faulty and had an unmanageably high error rate.

The 6,40,000 faulty testing kits delivered by China to Spain had only 30 per cent accuracy as against the 80 per cent demanded by the Spanish doctors. And then several others had joined the bandwagon of countries that rejected ‘Made in China’ supplies. The Dutch government had ordered a recall of around 6,00,000 masks which failed to meet standards out of the 1.3 million masks that had been shipped from China.

The Philippines too had ordered 1,00,000 testing kits from China but discarded them after they turned out to be only 40 per cent accurate. Low accuracy defeats the purpose of testing with positive cases missing the scrutiny of the authorities doing more harm than good.

Turkey too had rejected certain China-made testing kits over inaccuracy concerns and chose to place an order with some other Chinese company.

China itself has been losing calm that defeats the purpose of a PR exercise in the first place. When it was discovered that one is better off without a mask, the Chinese government asked other countries to ‘double-check’ instructions before levelling allegations of the masks being defective.

China’s condescending approach to the faulty masks that have been rejected by other countries because they were flawed to the extent that they were not even fitting the faces of medical workers.

Now even the Personal Protection Equipment (PPE) exported by China seems to be useless and sub-standard. In India, 63,000 out of the 1,70,000 PPE kits shipped from China, including donations, have turned out to be faulty because they didn’t meet Indian standards.

The kits were sent for testing to the Defence Research and Development Establishment (DRDE) in Gwalior. Sources said, “About 63,000 PPE failed to meet the set parameters during quality testing. Those kits, which passed the quality test, have been provided to the states.”

Apart from the fundamental flaws, there are concerns about China hiding asymptomatic cases and continuously downplaying its numbers. Trading with China and allowing its shipments also pose a risk of another outbreak getting imported from the Dragon.

Meanwhile, Beijing continues its utterly disgusting crisis profiteering, showing no sense of humanism even in the times of a Pandemic. Recently, supplies to the US from American companies situated in China were blocked by the customs officials over clearances.

Putting bureaucratic hurdles and custom bottlenecks in times of a Pandemic is rather below the belt and exposes China’s obnoxious “mask diplomacy”.

China wanted to wage a PR war with a view to profiteer out of the ongoing crisis. But it has backfired badly. People around the world are now ridiculing “Made in China” products as trash, a perception of Chinese goods that was peculiar to India is now becoming ubiquitous.

People across the world from India to Britain and the United States are today speaking of how “Made in China” means substandard products. Even requests are being made to the e-commerce giant Amazon for designating “Made in China” on the products coming from the Dragon. The world opinion is growing sharply against Chinese products.

#Covid:Tens of thousands of #PPE kits fail quality tests.Kits made in China, the world’s main supplier,that were donated to the Indian govt, cannot be used. Of 170,000 PPE kits that arrived on Apr 5, abt 50,000 failed. Reporting with ⁦@ASMankotiaET⁩ https://t.co/JuvZrUI95V

Hey @amazon – please label or designate “made in China” on the items you are selling.

So many items are deceptively marketed. We have no idea it’s coming from China until well after the purchase is made.

“Made in China” is also becoming synonymous with the Chinese virus- the most durable and long-lasting product that seems to have been manufactured in China till date.

I'll be on Steve Bannon's War Room program this morning at 11 a.m. to talk about why we should call the Made in China virus the #CCPVirus

#KomeshaChinese
In one of the screenshot on their social media, they claimed they're racists, we therefore declare a NO TO CHINESE products.Say NO to Chinese in Kenya and No to Made in China#uhurumustgo #Covid_19 pic.twitter.com/Qsuc8Kxafx

Employees of an unnamed workplace in Hong Kong received #facemasks which appear to be Japanese products, but were actually made in China. Despite being pkged individually, these were not clean; some pkgs contained dust, bits of grass + hairs. [ Credit: @PassionTimes ] pic.twitter.com/lhMP4APQit

Even in Kenya, opinion is growing against the “Made in China” products. What the faulty testing kits, low-quality PPEs and useless masks have done is expose China’s shoddy manufacturing that itself goes beyond medical gear. China’s “mask diplomacy” is thus turning out to be highly counter-productive and in the near future China would feel its repercussions with the world looking at its products with suspicious and mistrust.

With “Made in China” products getting infamous, videos of disintegrating PPEs have gone viral from France, with social media users instantly blaming China over their low quality.

Folks, This 👇 is Made In China trash (personal protection equipment) sent to France from China!! 😡😡😡pic.twitter.com/cnm9Wmp1xU

Though French officials have denied that these products were imported from China, the brand “Made in China” has taken such a hit that anything substandard immediately gets associated with China.

‘I am not Zaira Wasim,’ Babita Phogat shuts down trolls after being hounded for calling out Tablighi Jamaat

‘Modi will rain money from a helicopter,’ News channel Public TV gets into serious trouble for fake news