‘Poor will starve to death, COVID-19 tests not free,’ Even in these times, leftist media is busy peddling agenda

The Coronavirus outbreak has led India into taking exemplary and unprecedented action in order to check the spread of the novel Wuhan virus. Prime Minister Modi on Tuesday announced a nationwide 21-day lockdown- the largest shutdown exercise across the world to combat the novel Wuhan virus.

The move, of course, resonated across the political spectrum realising that a complete shutdown is the only solution in the present crisis, so that the fragile medical infrastructure of the country doesn’t end up getting further stressed due to a major Pandemic taking grip of the country.

Delhi is prepared to ensure essential supplies are available to all during the 21-day lockdown. Important updates on Delhi's effort to contain Covid-19. https://t.co/Ee3qpK28Rm

While the entire country understands that a lockdown is the only solution to the ongoing crisis, the leftist portals and the liberal brigade being the scaremongers that they are, have resorted to rumour-mongering and vicious propaganda in order to somehow target Prime Minister Modi even in the present testing times.

The government has taken a series of measures to reach out to the disadvantaged section s of the society, including allowing PDS beneficiaries to lift 6-months grains in one go, and the decision was taken well in advance on March 18. However, the Scroll story desperately tries to suggest that the Modi government has set the poor “adrift”.

It is true that livelihoods have been lost due to the lockdown, but had the lockdown not been announced the poor would have been also the ones losing their lives given their vulnerability to the virus, something that Scroll chose to simply gloss over. 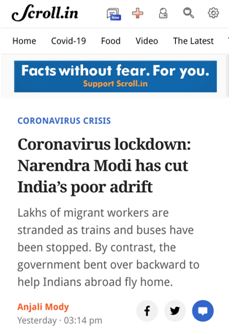 The country is fighting a crisis and in such a situation, it would be imprudent to believe that The Wire won’t unleash its rumour mills. While India has managed to keep COVID-19 at bay with its exemplary measures- 657 confirmed cases at the time of writing this article, in a country of 1.33 billion.

But The Wire lives in a world of its own and literally wishes a massive Coronavirus outbreak upon the country because long live propaganda!

The story itself reads, “India Could Be Next Coronavirus Hotspot, in Worst Case up to 60% Could Be Infected.” The leftist portal quotes the Washington-based Center for Disease Dynamics, Economics and Policy and lecturer at Princeton University Ramanan Laxminarayan to claim that India could be the next hotspot of Coronavirus. It is absurd that The Wire takes the opinion of an economist and not a health expert to strike fear among people.

The story states, “Dr Laxminarayan said there was absolutely no scientific basis for believing drinking gaumutra and taking gobar baths could prevent the coronavirus infection.” While The Wire was quick to take a dig at seemingly Hindu solutions, it had nothing to say about Halal Sanitizers or a slew of some absolutely brilliant measures taken at Shaheen Bagh such as protesting only for four hours, seemingly because the virus starts spreading only after four hours of robust socialising. 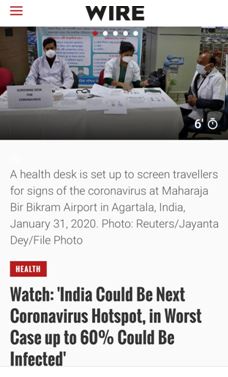 When the entire left-liberal machinery is working overtime to instil a sense of fear and panic, how could the radical leftist outlet Caravan Magazine unsurprisingly came into the picture too? Executive Editor Vinod K. Jose claimed that Coronavirus testing costs Rs. 4,500 in India while it is free in all other countries such as Iran, the United States, China, Europe, etc.

Which country calls itself socialist? pic.twitter.com/kDgbABMjVb

This is simply fake news without an iota of truth. Coronavirus test and treatment are absolutely free in India. Initially, only certain government facilities were designated for testing the novel virus, and later on the private laboratories were also allowed and it is for those laboratories that the cost was capped at Rs. 4,500. What Vinod K. Jose has done is compare the upper limit of a test in India with the cost of a test at a government facility in other countries.

The Quint, which has a history of publishing anti-India content has also indulged in fear-mongering in view of the 21-day lockdown. The title of its blog, that is, “21 Day Coronavirus Lockdown in India May Starve the Poor to Death”, is a desperate attempt to spark panic among the downtrodden in India. 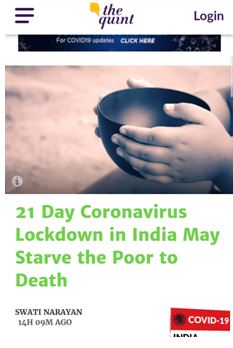 It states, “India’s poor who live hand-to-mouth simply cannot survive a week, let alone three weeks of corona quarantine, unless their kitchens are stocked with grain.”

The core idea behind this story seems to be based on the wrong assumption, deliberate or otherwise, that lockdown means complete shutdown, and it doesn’t count in the fact address, PM Modi himself tweeted that the adequate supply of the essential goods will be maintained till the lockdown, and the Ministry of Home Affairs also released a notification that ration shops, medical shops, and media house will remain open, but people rushed to hoard food items.

The same fear-mongering is also visible in Rupa Subramanya’s tweet, which reads, “So Indians will starve to death to beat Coronavirus. What a brilliant plan.” Despite government making it amply clear that all essential supplies will be maintained, such rumour mills continue to trigger panic.

So Indians will starve to death to beat Coronavirus. What a brilliant plan.

“Human rights” activist Prashant Bhusan, who started the trend of knocking at the doors of the apex court for midnight hearings to save terrorists facing death sentences, too contributed in this process. He tweeted, “How jobs, economy & livelihoods which were already strained, are being devastated by the Lockdown.”

It is clear that the entire leftist machinery has decided not to let better sense prevail. Today, the government announced a Rs. 1.7 lakh croore relief package to protect the poor and the COVID-19 warriors, that is, doctors, nurses, etc., who are at the risk of getting infected. But leftist media portals want to instil a sense of panic and spread fears in order to aggravate the Coronavirus crisis in India. Ideally, everyone should have supported the lockdown because it is the only way to save thousands of lives in the present situation, but with a vast array of leftist portals and journalists, our world is far from ideal.

Dance of the Giants: Facebook wants to buy a big stake in Reliance Jio, as RIL aims to go debt free

‘Came in contact with Christian Missionaries,’ How a Punjab man with no travel history got Coronavirus

‘Best CM’ Uddhav Thackeray makes another Hubei out of Maharashtra

From SAARC nations to USA, the world is counting on India for this wonder drug, and India has heard their call