HOME » Lounge » Sports » The most successful female boxer ever

The most successful female boxer ever

A legend in every way

‘Magnificent Mary’ is an understatement for the illustrious personality that MC Mary Kom is. Mary Kom, the name all Indians are aware of, never fails at bringing laurels for the country from world championships. Mary Kom, who hails from Manipur, and who has fought various odds to carve her success story, is certainly an inspiration for many Indians.

Mary Kom has shattered yet another record, and has emerged as the first boxer in the world to win 8 world championship meet medals. She did so by assuring herself of at least a bronze medal in the 51kg category of Women’s World Boxing Championships in Ulan Ude by reaching the semi-final on Thursday.

3rd seed Mary defeated Rio Olympic bronze medallist Ingrit Valencia of Colombia 5-0 to reach the semi-final. At World Championships, Mary Kom holds 6 Golds, and 1 Silver medal. It is yet to be seen whether Kom wins gold or silver at Ulan Ude. Nevertheless, a bronze is guaranteed. Mary Kom is keenly looking to secure a qualification for the Tokyo Olympic Games scheduled next year.

Mary Kom has risen from humble backgrounds. Her parents were tenant farmers at fields in Kangathei village, Manipur. Not economically strong, yet Mary Kom dreamt and aspired big. Always interested in athletics and boxing, her resolve of becoming a boxer strengthened after she drew inspiration from Dingko Singh, who in 1988 returned from the Bangkok Asian Games with a gold medal.  She started her training under her first coach K. Kosana Meitei in Imphal. When she was 15, she took the decision to leave her hometown to study at the Sports academy in the state capital Imphal. She hasn’t looked back ever since. 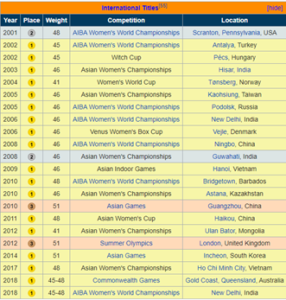 Mary has so many victories to her credit that it would be difficult to mention all of them in one article. Keeping in mind her major achievements, the President of India in April 2016 nominated Mary Kom to the Rajya Sabha. In March 2017, the Ministry of Youth Affairs and Sports, Government of India, appointed Mary Kom along with Akhil Kumar as national observers for boxing. The road which leads to the National Games Village in Imphal district of Manipur has been named after Mary Kom by the government of the state, keeping in mind her unparalleled contribution in making Manipur all the more proud.

Apart from the championships and ring victories, Mary Kom is also a recipient of various awards by the Indian government, such as the Padma Bhushan, which she received in 2013; the Padma Shree, the Arjuna Award, the Rajiv Gandhi Khel Ratna Award, among other prestigious awards as well. She has also been granted an Honorary Doctorate degree by the North Eastern Hill University, Shillong and Kaziranga University, Assam.

Mary Kom is a vigorous animal rights activists, and supports PETA too. In an interview in the Times of India she was quoted as saying, “One of the best ways to knock out cruelty to animals is to teach compassion to young people. Animals need us in their corner. With violence seemingly all around us, it is more important than ever that we teach lessons of respect and kindness in the classroom.”

Mary Kom serves as a beacon of hope for those Indians who want to make it big in life, yet have limited resources to do so. With lasting determination and toil, success can never be a far-fetched thought.

Trump, Putin, Assad and Erdogan – Here’s a look at what’s happening in Syria