Recently the French government handed over the first of the 36 Rafale fighter jets to the Indian government on the auspicious occasion of the Indian Air Force Day and Vijayadashami, which occurred simultaneously. Defence Minister Rajnath Singh along with the Vice Chief of Air Staff and other senior IAF officers was present for the official handover ceremony.

This wasn’t all. On the occasion of Vijayadashami, Defence Minister Rajnath Singh also performed the Shastra Puja by anointing the Rafale with the Holy ‘Om’ after the plane was officially handed over. With this one decision, Rajnath Singh not only glorified Indian culture abroad, but also held our heads high with such affection for Indic culture.

However, this didn’t go down too well with our dear Congress. They immediately attacked the BJP government, primarily Rajnath Singh to be precise. On one hand Congress leader Sandeep Dikshit raised questions on the presence of Rajnath at the handover ceremony, and on the other hand, senior Congress leader Mallikarjun Kharge had this to say –

“There is no need to do such ‘tamasha’ (drama). When we bought weapons-like the Bofors gun previously purchased, no one went & brought them while showing off.”

Mallikarjun Khage, Congress on Defence Minister officially receiving Rafale aircraft in France & performing 'Shastra Puja': There is no need to do such 'tamasha' (drama). When we bought weapons-like the Bofors gun previously purchased, no one went & brought them while showing off pic.twitter.com/ITM0IpSMw6

Btw, this is an image of Shastra Pooja being conducted in 1980 under Congress rule. pic.twitter.com/oVGNekg7cK

Apart from this, social media users shared an old video, wherein Jawaharlal Nehru was witnessed performing Sanatani rituals before the launch of an Indian ship, ‘Jal Usha’, as shown below –

As such, not only does the fallacy of Mallikarjun Kharge stand exposed, but it also this comes across as a lame attempt to obfuscate the ultimate truth. The statement of ‘The Skin Doctor’ is not far from truth as well. By crying hoarse on Shastra Puja, Congress has not only scripted their loss for the upcoming polls in Maharashtra and Haryana, but has also ensured that their candidates lose their deposits in most of the seats as well, since insulting Sanatan Dharma is looked at with contempt in both of these states.

However, this is not the first time that the Congress has mocked the Sanatani rituals in order to appease the minorities. What better can be expected from the party who had announced the Ram Setu as fictional and had prepared to destroy the remnants of the same? Be it giving wind to the hoax of Saffron Terror, or insulting the Sanatani symbols in the name of targeting the right wingers, Congress has given it all when it came to insulting Sanatan culture.

This is not all. During the Lok Sabha polls, Congress left no stone unturned in order to reveal their deep contempt for the Sanatani rituals. While Congress candidate from Lucknow, Pramod Krishnan insulted the Sanatanis with his objectionable recitation, Tejasvi Surya was subjected to macabre trolling by the members of Congress IT Cell, who left no stone unturned in order to insult him for the same – 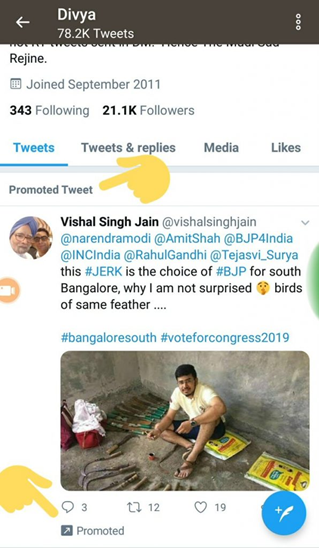 The affection for Sanatan Dharma in Maharashtra and Haryana is hidden from none. The ideal of Hindutva gets the maximum support from both of these states. In such a scenario, by mocking the Shastra Puja performed by Rajnath Singh, the Congress hasn’t insulted India, but has only revealed their sick mentality, and has ensured complete annihilation for themselves in the upcoming legislative polls in the mentioned states.