by S Sudhir Kumar
in Opinions

Journalist Pallavi Ghosh’s legendary support of the Congress party in general and Rahul Gandhi in particular is quite well known. But I never thought a day would really come when Pallavi Ghosh will outdo herself in her legendary skills. While twitter was abuzz with how Rahul Gandhi took yet another flight to Bangkok, merely days before crucial elections in Maharashtra and Haryana, Pallavi Ghosh enlightened us with a totally new and unprecedented angle – that Rahul Gandhi was planning a coup by meditating in Cambodia!

Don’t believe me? Then you must see her article titled “Congress Coup in the Works? Rahul Gandhi’s Meditation in Cambodia May be Masterplan for His Second Innings”. And no, this is not a satirical piece. It is as serious as it gets. A pre-cursor to this exemplary analysis is this news item printed in The Hindu on October 5th, 2019. We have been introduced to a totally new dimension of the Congress party – Team Sonia and Team Rahul aren’t getting along together! Am amazed at the capacity of the mighty Congress party to write these jokes!

Pallavi Ghosh adds yet another dimension to this angle – Sonia Gandhi herself wants to see her son become Congress President again and is aiding him in planning a coup against her! This is not my interpretation of her article, but this is her own conclusion – “Sonia Gandhi wants a second coming for her son but this time, the coup will be from within, possibly nudged by her”. Now the reader is expected to believe that Sonia Gandhi is sacrificing her own position by planning a coup against herself in order to make her son the President again. Some jokes really write themselves!

She continues – “If Rahul Gandhi decides to become Congress president again after elections, it will mean the end of the old guard once and for all.” If Rahul Gandhi decides? End of the old guard? Do journalists like Pallavi Ghosh really take the readers and citizens of the country to be so naïve, that they will buy such silly arguments? Do these journalists really forget the massive drubbing the Congress party has received two times – in 2014 and in 2019?

When journalists like Pallavi Ghosh write that “One reason why the grand old party suffered under Rahul Gandhi as president was the constant tug of war between the Congress of Sonia Gandhi and that of her son.”, do they want us to really believe that the Mother-Son duo are so disconnected with each other that they now have different coteries working against each other?

When they write that “There were sniggers when Rahul Gandhi thought of democratic organisation elections” and “The fact that the young are leaving the party by attacking the old guard will possibly be used by Sonia and Rahul Gandhi later to attack those who never let him work.”, do they really want us to believe that the all-powerful Gandhi family cannot even bring in simple changes within their own party? Do they really want us to believe that there exist people in the Congress party that won’t let the might Gandhi family work? When they write that “It’s also a fact that Rahul Gandhi’s ideas for Lok Sabha polls had few takers”, do they expect us to forget the massive coverage in the media then about how Rahul’s Congress is now a changed Congress?

The Congress party has learnt zilch from it’s many defeats in the past 5 years. It was Rahul Gandhi who chose the “old guard” of Kamal Nath and Ashok Gehlot over “young turks”. So any amount of sugar coating these decisions by “no one listened to Rahul” arguments by sources and journalists will not help. The romanticisation of Rahul Gandhi’s vacations is now getting very nauseating. To tell us that “This ‘vipassana’ by the Gandhi scion may just mean the slow beginning of his second return.” Is tantamount to insulting our intelligence!

However, Pallavi Ghosh’s ending line is simply a blast – “However, this time it’s the Congress that needs attention and not the BJP.” What does this even mean? That his multiple vacations in past 5 years always meant that he was focusing his attention on the BJP and not his own party?!

I am clueless on what Pallavi Ghosh wanted to convey through this fawning piece. What it does convey though is the extremely low level of leadership skills that Rahul Gandhi possesses. We are told that his alleged vipaasana trip “leaves many of his chosen leaders in confusion as his meditation comes in the midst of crisis for the young”.

Not wanting to be left behind, Shekhar Gupta’s The Print tells us on October 8, that there is a “Rahul stamp” visible on “Team Priyanka”. 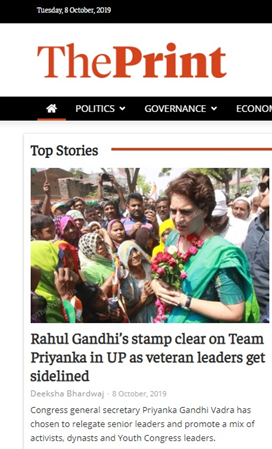 The maze indeed gets murkier – we now have Team Sonia, Team Rahul, and Team Priyanka. And we have tough competition amongst the English media on who praised each of these teams the best. Perhaps rewards include a trip to Thailand?

S Sudhir Kumar is based out of Hyderabad and an engineer in the telecom industry by profession. His interests outside of work lie in food, current affairs and social service.

‘You don’t belong here,’ The New World order is final. And it is terrible news for China

‘We will punish India for this,’ China got so spooked by ‘Remove China Apps’ that it got Google to remove it

Manoj Tiwari has been sacked as the Delhi BJP chief. 2 years too late but good riddance