India Today data analysis team has released a very interesting world cloud of PM Modi’s speech given on the 73rd Independence Day yesterday at the Red Fort in Delhi. A closer analysis of the speech reveals some interesting insights into PM Modi’s mind and focus, especially when compared to the speech given by his Pakistani counterpart, Imran Khan. 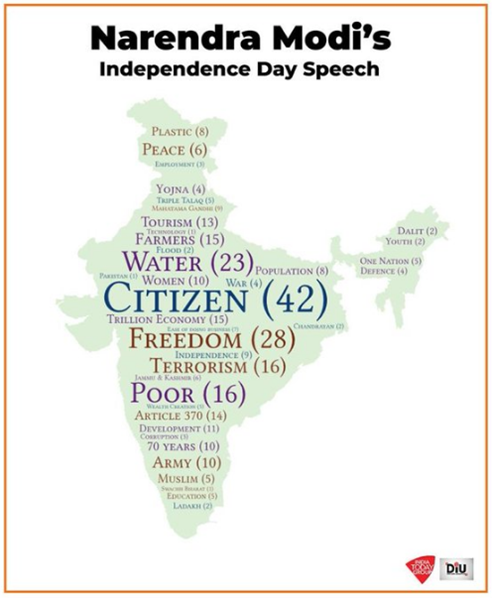 PM Modi has mentioned the term citizen the most, a total of 42 times. With that he mentioned the Article 370 of the Constitution, and spoke about constitutional spirit and wholesome inclusiveness of all the citizens in the country. PM Modi also acknowledged the water problems in the country and the resolve to make it the need of the hour. PM Modi also focused on the economy, and how the government is looking at infrastructure to drive the economy. He spoke of the GST and how it had enabled India to become ‘One Nation One Tax’ and spoke about how discussions are needed to bring about ‘One Nation One Election’. He also spoke about India’s fight against terrorism and the efforts being made to remove corruption in the country. He mentioned the positive legislations such as the criminalization of Triple Talaq and how it protects the Muslim women. He stated how India will soon become an open defecation free country. Moreover, he spoke on how the government will soon have a minimal role in people’s lives, thus paving way for people to have the freedom of pursuing their own aspirations.

One striking feature of the speech was that it was completely devoid of either, Pakistan or its Prime Minister, Imran Khan. PM Modi had focused on India and its citizens, completely ignoring the neighbour. Poor Imran Khan was given the Kejriwal treatment, wherein the Prime Minister considered the subject so irrelevant; he refused to waste a single minute on it. Thus, not deeming it worthy of mention in his Independence Day speech, the focus was entirely on Indian accomplishments and steps being taken to resolve the issues.

On the other hand, Imran Khan’s speech was full of mentions on India, RSS, Kashmir and even Modi. In fact, Kashmir was one of the most mentioned words in the speech.

Along with this, he even used plenty of negative terms such as ideology, Nazi and war. The speech was also highly communalized with mentions of Muslim and Muslims all throughout. Pakistan is facing charges of terrorist harbouring and yet, not once in his speech did Imran Khan mention about the approach to curb this menace. Neither, did he talk about the economy and how the country could improve its deplorable state.

This stark difference in the speeches of the two PMs reveals a very interesting picture about their vision for their respective countries. The speeches indicate that while PM Modi has a very positive outlook, centering on the development of the nation and curing the menaces, Imran Khan is oblivious to the issues his country is facing. By talking about war and ideologies, he is just inciting aggression, a highly unwise move given the state of affairs in Pakistan. Moreover, like the obsessed person he is, he used his Independence Day speech to ramble about India and other destructive topics in an incoherent manner, when he could have in fact used it to draw out nationalistic and positive sentiments in the Pakistani citizens. PM Modi on the other hand, refused to even acknowledge Pakistan’s existence and blissfully have him the Kejriwal treatment.