Hilarious fake news on Kashmir floods social media proves Pakistan can claim victory in only one thing: the propaganda war

As Pakistan is left red faced after the UNSC decided not to censure India regarding legislative developments in two newly created union territories, Pakistan is fast running out of options to soothe out the internal anti-India uproar in its radical Islamist infested regions. Facing a dearth of options to counter India, disinformation campaigns coordinated by ISPR, the public relations wing of the Pakistani military establishment, against India have been on full throttle, after India’s move to enforce the Indian Constitution in Jammu and Kashmir in full spirit.

Leading the efforts for Pakistan is Asif Ghafoor who is the Director-General of Inter-Services Public Relations (ISPR) which is ideally the public relations wing of the Pakistan military establishment but to be blunt, it is nothing but the propaganda wing of the ISI. An account linked to DG-ISPR Ghafoor had tweeted, “Rifts emerging among Indian security forces deployed in #Kashmir. A Muslim Kashmiri policeman shot & killed five Indian CRPF personnel in a ‘blue on blue’ attack after they refused to let a pregnant woman by because she didn’t have a curfew pass. Things on edge since that attack.”

Rifts emerging among Indian security forces deployed in #Kashmir. A Muslim Kashmiri policeman shot & killed five Indian CRPF personnel in a ‘blue on blue’ attack after they refused to let a pregnant woman by because she didn’t have a curfew pass. Things on edge since that attack.

Another one was found posing as a ‘Col Vijay Acharya’, claiming that Pakistan killed 25 in his unit and media did not cover it, for which he is resigning from the force. This tweet was ridiculed widely until it was taken down. 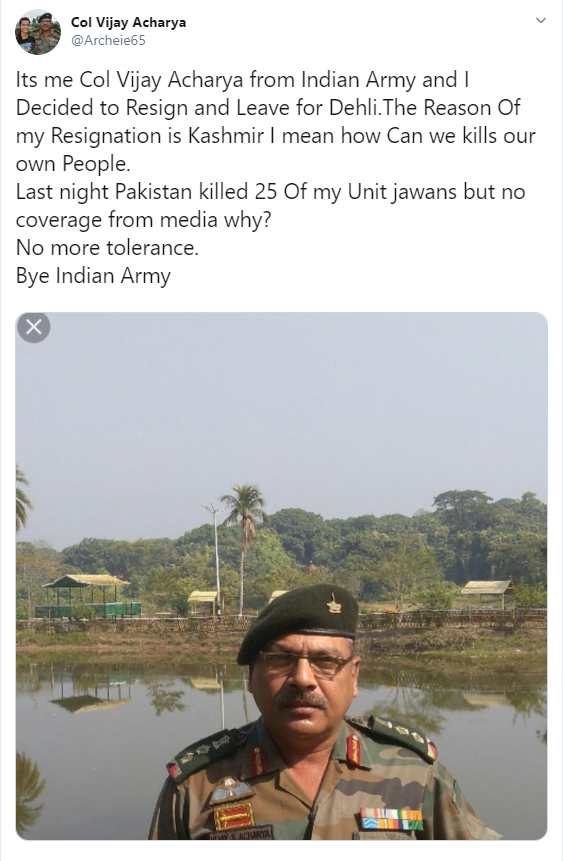 Along with the above tweet a number of reports coming out through social media channels linked to Ghafoor and his associates have been flagged down by Indian authorities as fake and authorities have also initiated legal action against these fake stories clearly intended to disrupt peace in Jammu and Kashmir.

Nonetheless, to counter the massive disinformation campaign being carried out by Pakistani military, Indian twitteratis joined in to give Pakistan a taste of its own medicine.

I love Twitter. Dear ISPR, this is how it is done 😂 pic.twitter.com/DJoDuXoU5k

Pakistan’s propaganda war against India is on overdrive and several unrelated videos are being used to project Indian forces as cruel and murderous. The video below has been used widely to show that India commits atrocities in Kashmir, however, it is a video of a police mock drill in Jharkhand.

Mr. Modi @narendramodi have a look yours Indian army opening fire on unarmed civilised #Kashmiris protesters. I must warn you, remember your army shall have to paid tremendous price once we can cross the #LOC any time you should #EndKashmirBlockade @peaceforchange @ImranKhanPTI pic.twitter.com/B4jhrqTxJE

This claim also turned out to be fake and was befittingly refuted by Indian army which said, “Claims made Pakistan are fictitious.”

Earlier Ghafoor had also tweeted an old edited video of an Indian war veteran, in which Ghafoor claimed that the war veteran was talking about ‘Indian failure’ after Balakot strikes. He had tweeted, “Admission of Indian failure and losses on 27 February 2019 by a well decorated Indian Airforce veteran Air Marshal Denzil Keelor.”

After facing condemnations from all quarters of Indians over the fake video, he had later accepted that the video was fake and claimed it to be “doctored through inset”.

This is just the tip of the iceberg, as exposing all of the lies and fake news fed on social media by ISPR is practically impossible. Pakistan based and ISPR backed social media accounts have been continuously working towards furthering Pakistan’s anti-India propaganda. Micro blogging site twitter had also taken action against these fake news peddlers and had suspended 4  flagged accounts. However, Twitter, like other social media websites appears highly unprepared to deal with propaganda push as massive as that made by DG-ISPR.

We live in the era where data is manipulated, and facts are twisted. Hence it is absolutely important for everyone to verify facts before retweeting or sharing anything on social media. Meanwhile, the government must be commended for flagging fake news peddlers on Twitter and getting their accounts suspended. However, for Pakistan their last claim to victory on social media is also poised to fizzle out like their efforts did recently in United Nations. Pakistan’s utter failure to get the international community on its side has embarrassed it to the point that it relies highly on fake news and propaganda. After facing acute humiliation at the UNSC yesterday, the social media propaganda war is perhaps the only thing Pakistan can truly claim victory in.