Vinod Dua, senior journalist and TV anchor who has been accused of predatory sexual behavior in the ‘Metoo’ movement has violated the Model Code of Conduct (MCC) and discussed exit polls on live television. The TV show named Vinod Dua Live was aired on Swaraj Express in which Dua showed a report by NEWS CLICK which predicted that UPA will win more seats than NDA in the 2019 general election.

Dua exited The Wire after he was accused of sexual misconduct. Currently, Dua hosts a show with HW news network named Vinod Dua Show and in the episode titled ‘SP-BSP alliance history & MCC violation’ aired on April 29, 2019 he discussed Model Code of Conduct violations by BJP leaders. Just a day after on April 30, he discussed exit polls which is strictly prohibited by the Election Commission of India.

In the video, Vinod Dua discussed an exit poll report by NEWS CLICK, which is run by Prabir Purkayastha who launched the website in 2009. The website publishes articles defamatory of BJP and PM Modi. Its founder Purkayastha is ‘anti coporate’ and his articles get published on official websites of the Communist Party of India (Marxist). 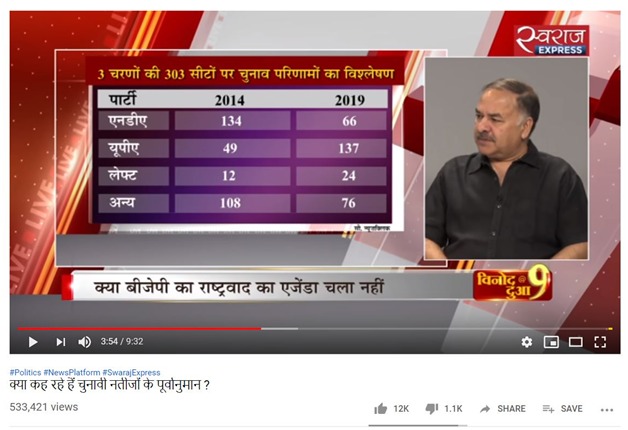 The Election Commission of India imposed a complete ban on opinion and exit polls published on Television, print, radio, cinema or any other medium of mass communication. The exit and opinion polls of one phase could sway the public mood in the upcoming phases. The people are more likely to vote for the party which has more chances of winning the election. The show by Vinod Dua was viewed by more than 5 lakh people and the NEWS CLICK exit poll would have reached more than 1 million people. These viewers had been misguided that UPA is going to win more seats than NDA and therefore they would prefer Congress led UPA while voting.  The whole purpose of the Election Commission has been compromised by Vinod Dua and NEWS CLICK, the authority should take appropriate action. NEWS CLICK is publishing exit polls after every phase and ECI has taken no action against the media organization.

Gurdeep Singh Sappal, the ex-CEO of Rajya Sabha TV, and advisor to former Vice-President Hamid Ansari launched Swaraj Express on November 2018. The group also runs a website named newsplatform.in. Amrita Rai, wife of Digvijay Singh is Managing Editor of the group and Gurdeep Singh Sappal is Editor in chief. Sappal is close to Congress party and most of the top management of the news organization is filled with ex-Rajya Sabha TV employees.

Vinod Dua, ex consulting editor of The Wire is another member of ‘old establishment’ who rose to prominence at the time of state controlled media by singing laurels to the government. He was awarded the Padma Shri for journalism in 2008 when UPA-I was in power. He became irrelevant as the media became independent and came out of the clutches of the government. But the Wire gave him the opportunity to host a show named “Jan Gan Man Ki Baat’ in which he bashes the current government for issues like municipal waste management to not handling relations with Russia properly. He has been accused of sexual assault by documentary filmmaker Nistha Jain. A few days before his own deeds came out, he hosted an episode in support of the #Metoo movement.

KCR meets Vijayan, talks to Kumaraswamy amidst speculations of a federal front