The Quint’s hypocrisy on fasting in Ramzan and Navaratri

by Akriti Tyagi
in Analysis
0

The month of Ramzan is here and the Muslims are quite excited, and rightly so. But what is incomprehensible is the fact that a number of media organizations, who supposedly portray themselves as being secular have come out celebrating the occasion, a few notches above of what is expected from an unbiased platform, especially when viewed in relation to their other pieces on Non-Muslim festivals. The Quint has recently published an article enumerating the benefits of fasting during the month of Ramzan. 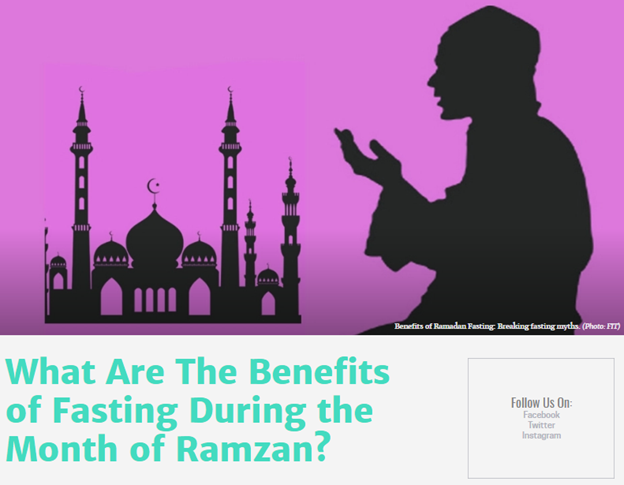 The article has a very encouraging tone and is talking about fasting in general, giving its benefits. Those benefits specified are related to general eating habits and are not particularly related to “Ramzan”. However, the entire language of the article is solely concerned with “Ramzan” and keeps mentioning the term wherever possible. Even when talking about the benefits, which are universal to all forms of fasting, the article has titled them as “Health Benefits of Ramadan Fasting”; whereas they are in no way relevant solely to Ramzan.

The Quint can perhaps claim that they are trying to enlighten people about the benefits of fasting and is using the term “Ramzan” due to the occasion. However, true hypocrisy of the “neutral” publication is seen when their previous articles and videos about other festivals come to light.

Back in 2017, The Quint had published a video, titled “Is fasting healthy?” This video had floated before the Hindu festival of Navaratri and had proceeded to critically analyse the practice of fasting. 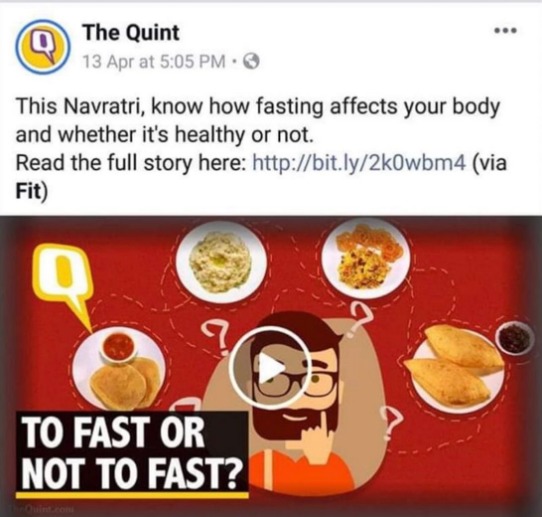 This video begins with The Quint preaching people about how fasting can be “okay for 1 or 2 days” but can be “dangerous if a person has a medical condition”. Continuing further with the video, the anchor specifies how people “breaking their Navaratri fasts with greasy food is a problem”. Then the viewers are informed of the “loss in their insulin level due to fasting” and how it’s not the “weight which is lost but mostly just fluids from the body”. The Quint also graciously informs the viewers on how “fasting slows down their metabolism so when they eat again, they gain weight much faster”. After essentially proving that fasting isn’t healthy for the body and neither will it help in weight loss; The Quint goes on to state that fasting isn’t helpful for detoxification either, which is although disputed by some medical experts.

During the Navaratri time, The Quint was overly concerned with the negative effects a person’s body might undergo due to fasting; whereas now, they seem to be the biggest propagators of fasting. Strangely enough, they have contradicted one of their own points now by essentially claiming that fasting helps in the detoxification of the body, without any mention of any other medical opinions. While they enumerate on how fasting is equivalent to physical exercise, helps improve memory, gives a strong immune system and helps control epileptic seizures; The Quint fails to make a mention of how eating greasy food after the fast can have a negative impact on the health, amongst the other red flags. Moreover, this article makes one ponder as to why such immense benefits of fasting were strangely missing from the Navaratri video.

However, since this isn’t the first time The Quint has displayed its overly Hinduphobic stance, the citizens aren’t much surprised. Before the Hindu festival of Holi, a festival which is based on the pretext of “good over evil”, they believed that the festival just entails “kids unleashing terror on the streets in the name of Holi”. While before the Muslim festival of Eid, The Quint opinioned that the festival is a brilliant occasion for mending broken relationships. In someone’s opinion, butchering the pet goat by a mere adolescent in a street overflowing with blood unleashes more terror to the adolescent’s mind, the animal and any bystanders than Holi actually will.

The Quint, in its effort to be secular, has actually got itself in a situation wherein they are downright discriminatory towards the other religions. Being secular does not mean worshipping Islam, it means viewing Islam, Hinduism and other religions at an equal footing, which the media organization sadly fails at, time and again.

Columnist Sanjay Kumar, who claimed the non-existence of Modi wave in 2014, claims the same for 2019