Left-liberals spread misinformation about charges of Aadhaar based authentication

There is widespread confusion on whether the private as well as public companies will be charged for using Aadhaar based authentication or not. Some of the left-liberals deliberately spread misleading information about government organizations being charged for using Aadhaar based authentication. They seem to have quoted ‘selective facts’ from government notification to spread the rumour. “BIG NEWS @UIDAI announces charges with 2 days to election. So all those who thought the authentication is FREE> here’s news. Each eKYC inquiry will be charged Rs20; each YES/NO authentication will be Rs0.50 since aadhar required everywhere money will be docked all the time!” tweeted Sucheta Dalal, a financial journalist who runs Moneylife. “Now we need to pay for gazette notifications as well, but sources say a notification has been issued. Can someone access?” she added. She through her tweet has spread misinformation that government agencies will also be charged for using Aadhaar based authentication and e-KYC transaction.

BIG NEWS @UIDAI announces charges with 2 days to election. So all those who thought the authentication is FREE> here's news. Each eKYC inquiry will be charged Rs20; each YES/NO authentication will be Rs0.50 since aadhar required everywhere money will be docked all the time! 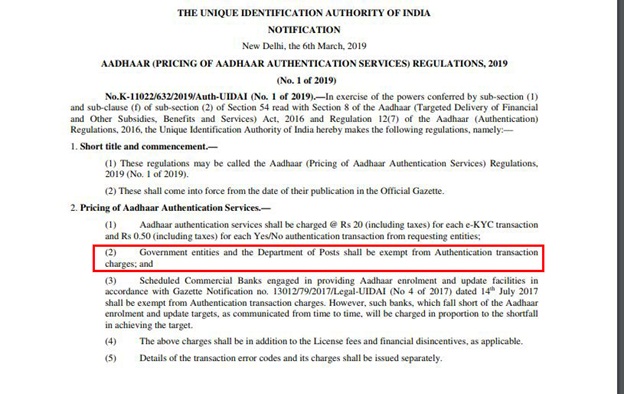 Earlier, Finance Minister Arun Jaitley had suggested that a new legislation could be brought which would allow banks and telecommunication players to use Aadhaar data. “Most of what Aaadhar does has been upheld by the court. What has not been upheld falls in two categories? The bulk of that has been struck down on two principles. One is the principle of proportionality,” said Arun Jaitley at the Hindustan Times leadership summit in October.

Supreme Court in its decision on Aadhaar card ruled the use of Aadhaar data by private companies as unconstitutional. These companies could no longer make Aadhaar identification compulsory for their products and services. But the amendment in the act will once again make the verification process easy for the companies.

Telecom companies and banks were not happy with the apex court’s ruling because Aadhaar has simplified customer verification to a great extent. According to bureaucrats, people need some kind of digital identity, “Digital identity is required across platforms. So it’s not a question of Aadhaar or mobiles alone. A lot of people, because they move to the digital mode, they need some form of digital identity. Now if it cannot be Aadhaar, what should it be. We have to evolve through this,” said Secretary, Department of Telecommunications (DoT) Aruna Sundararajan.

So, it was very important to bring a legislation that allows private companies to access the Aadhaar data with strong safety measures. The amendment will do the same and will be helpful for the growth of banks and other financial and technological sectors in the country.

As the protesters have been exposed, they are shifting goal post everyday