Infrastructure development has been the top priority of the Modi government since it stormed to power in 2014. The government has made a significant investment in public transport, highway construction, railways, water transport, and air connectivity. Due to the slump in crude prices in the initial days, the large public investment in infrastructure was supported by the oil bonanza. On the other hand, the investment in roads sector under UPA government was very low as various ‘welfare’ programmes like MGNREGA did not give the government enough space to finance the infrastructure to the extent, the incumbent government is doing. The last big push in the highway sector was in NDA-1 government led by former Prime Minister Atal Bihari Vajpayee. The two big infrastructure projects- Golden Quadrilateral Network and Pradhan Mantri Gram Sadak Yojna (PMGSY) were started during this time only.

The Modi government has prioritized the infrastructure spending in the same way as was done under Prime Minister Atal Bihari Vajpayee. The Modi government has built 28,531 km of national highways in its four and a half years since 2014-15, which is 73 percent more than 16,505 km of the highways constructed under Manmohan Singh in four years till 2013-14. Minister of Road Transport and Waterways, Nitin Gadkari has set an ambitious target of 65,000 km of highways till 2022. The target of 65,000 km has to be achieved with an investment of 5.35 lakh crore rupees under the project named Bharatmala Pariyojna. Out of the total target of 65,000 Km, almost 24,800 km of the highway is set to pass through inter corridors and economic corridors, said Gadkari while speaking in Lok Sabha.

This is due to the innovative solutions of the government aimed to spur the pace of construction activity. A large number of stalled projects had blocked the infrastructure projects and at the same time had been adding to NPAs of the banking system as well. To overcome this problem, the Modi government brought the hybrid annuity model (HAM) in 2015. Under the HAM, the government will pay 40% of the project costs to the developer in the first five years through annual payments (annuity). The remaining payment will be made on the basis of the assets created and the performance of the developer. In this model, the developer will have the toll right, while revenue collection would be the responsibility of NHAI. The HAM model is beneficial as it offers money to the developer to start the project while the financial risk is shared between both the former and the latter. 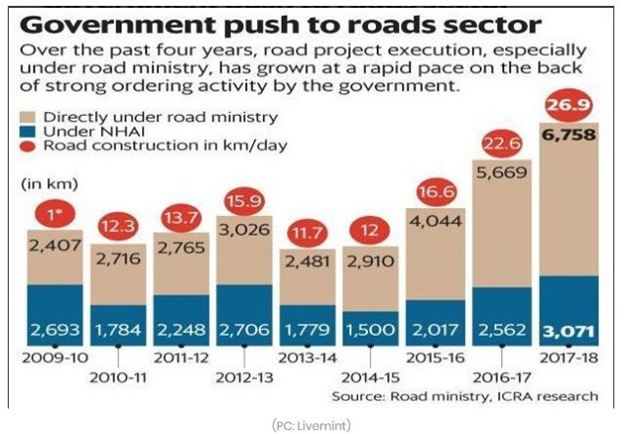 The pickup in NHAI’s pace of construction is mainly due to the new hybrid annuity model (HAM). Earlier, there were two main models of highways construction in India- the Engineering, Procurement and Construction (EPC) Model and Public-Private Partnership (PPP) model. In the EPC model, the government bears almost all the costs of the project and is responsible for operations and implementation. In this model, the government is required to bear a high financial burden. On the other hand, in the PPP model, a road developer constructs the road and is allowed to recover his investment through toll collection. In this model, the developers hardly deliver the projects on time. However, due to the HAM model, the midsized companies which got most of the contracts, saw their order books being three to four times of the revenues. There are also concerns over the timely execution of the awarded projects. So, the Modi government is expected to shift back to the EPC model where it will be required to bear most of the project costs and responsibility for operations and implementation despite the financial burden involved in it.

Connectivity is essential for the economic growth of any country and the huge investment made by the Modi government for the highways is set to help the country to achieve the target of double-digit economic growth.

After Yogi, PM Modi likely to hold cabinet meeting at the Kumbh Mela