Looks like Arvind Kejriwal and Mamata Bannerjee aren’t the only contenders for the moniker of ‘protest king’ in Indian politics. With his current antics in New Delhi, the incumbent CM of Andhra Pradesh N. Chandrababu Naidu seems to be the latest contender for the same. Not only is he displaying sheer hysteria in his bid to corner the rising popularity of PM Narendra Modi, but also he has no qualms in splurging the hard earned money of his state’s taxpayers for his fancy protests.

Initially, as per news reports, it turned out that CM Naidu pumped in Rs. 1.12 crores from the state exchequer for his one day ‘dharna’ in New Delhi. For the so called protest, which also served as his bid to generate some opposition unity for the much fancied Mahagathbandhan, N Chandrababu Naidu pulled out all stops. This also included two special trains for the band of protestors assembling in New Delhi .

However, in a startling revelation by news portal The News Minute, it seems that CM Naidu has splurged much more than what is shown in the news. As per the documents accessed by the news portal, the expenditure for the one day protest in Delhi, as sanctioned by the Finance Department of Andhra Pradesh, turned out to be a staggering total of 11.12 crore, funded wholly from the state exchequer, as shown below:- 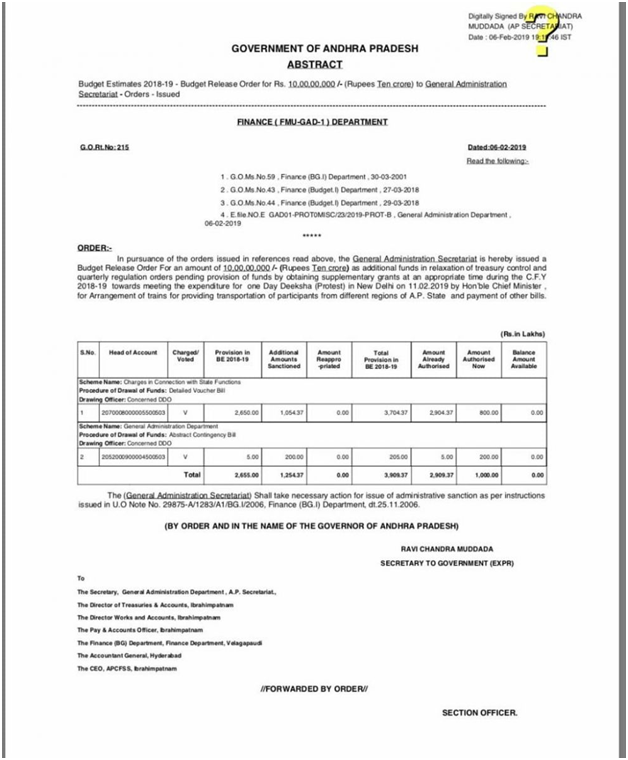 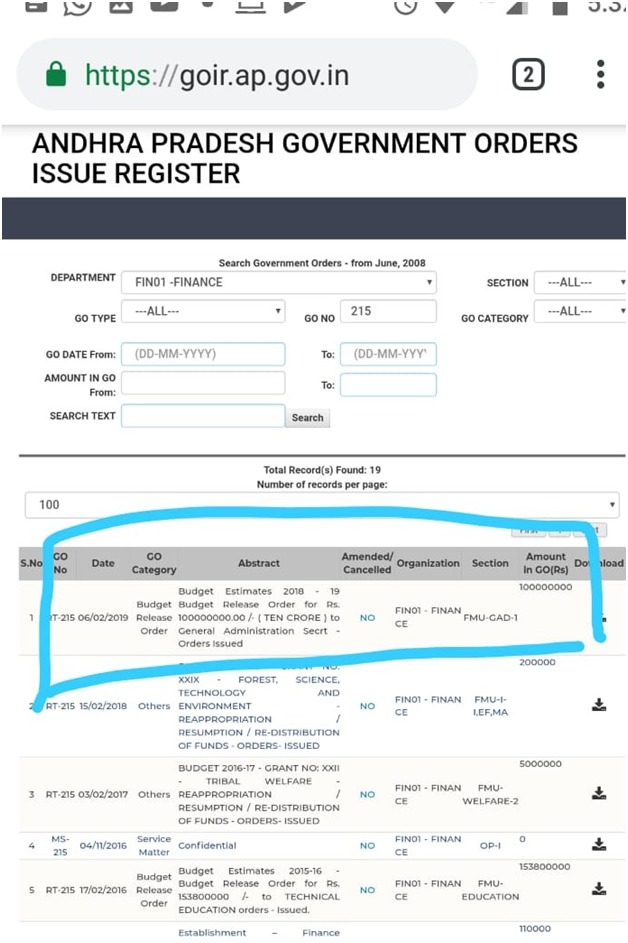 As per the documents, the signatures on the GO were that of Ravi Chandra Muddada, who happens to be the Government Secretary [Expenditure], and a copy of the documents was also uploaded on the official website of the state.

No sooner had this article gone viral on social media than the government sprang into action with a clarification. To quote the press release on this issue, “The Budget Release Order (BRO) issued refers to provisions of Rs 8 crore for Other State Functions and only Rs 2 crore for Deeksha. The opening paragraph mentions the same and the allocation is also made as such in the table. It is further clarified that out of provisions of Rs 2 crores, GAD has issued about Rs 1.23 crores – 3 bills amounting to Rs 1.12 crore, Rs 10 lakh and Rs 1.3 lakh only. The remaining amount of Rs 77 lakh is a provision for any final bills.”

However, going into the details of the clarification, it seems quite vague and only exposes the hypocrisy of the corrupt politician that Chandrababu Naidu is. These revelations now put him on the same pedestal as his notorious counterparts from Delhi NCR and Bengal, who splurge millions of taxpayers’ money for their personal protests.

To be honest, Chandra Babu Naidu has now come a long way from being a backstabber in the quest for power to becoming just another cry baby like Arvind Kejriwal and Mamata Bannerjee. The fact that he has no shame in wasting the hard earned money of his state’s honest taxpayers is a testament to how low this man can stoop just so that his opponent does not come into power in the Centre. It is only a matter of time until the public teaches him a stern lesson for his histrionics in the upcoming assembly elections of 2019.

Parliamentary Committee on IT plans to summon Google and Facebook bosses