In a historic event, PM Modi will inaugurate road-cum-rail Bogibeel Bridge on Late Shri Atal Bihari Vajpayee ji’s birth anniversary tomorrow. The 4.94 km long Bridge is the largest road-cum-rail bridge in the country. The train on this route and road bridge will help the army and civilians alike. Trains will run on the double line in the lower lane and on top of that, there is a three-lane road. 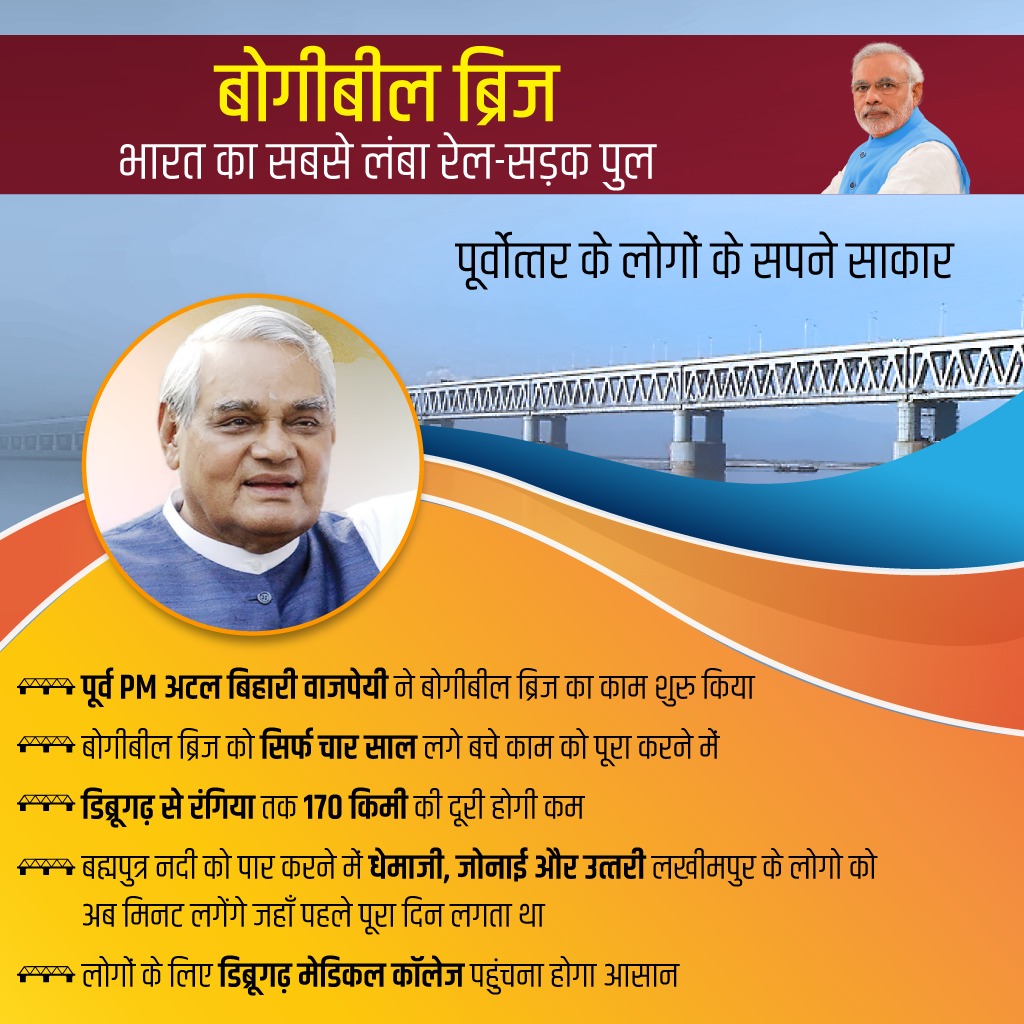 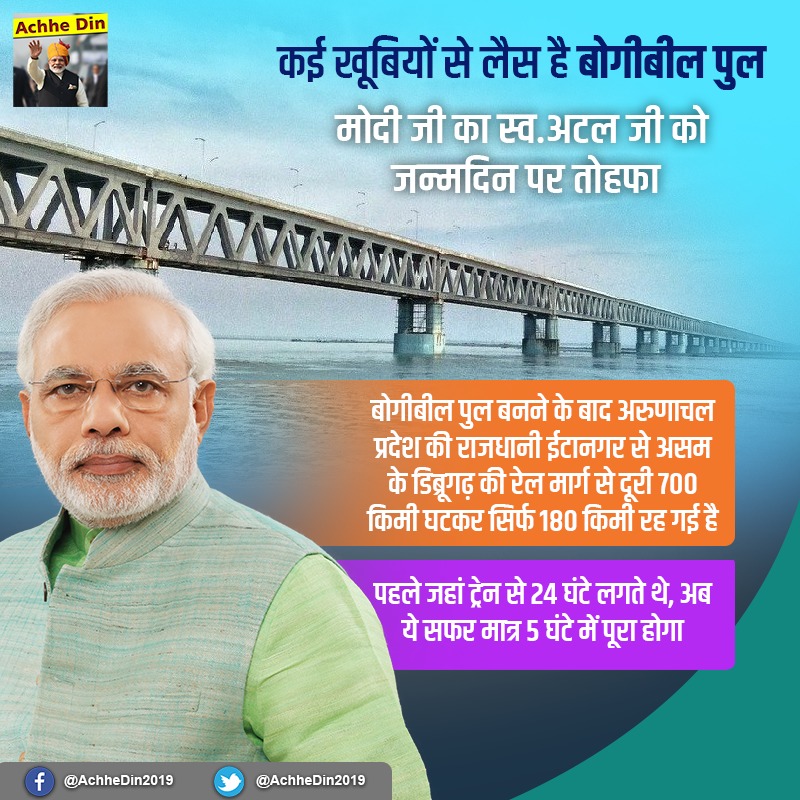 More than 16 years ago, on 21st April 2002, late Shri Atal Bihari Vajpayee, the then Prime Minister of India, had ceremonially started commencement of the work for Bogibeel Bridge. Only 58% work of the bridge could be completed in 12 long years till 2014 since beginning of the project. 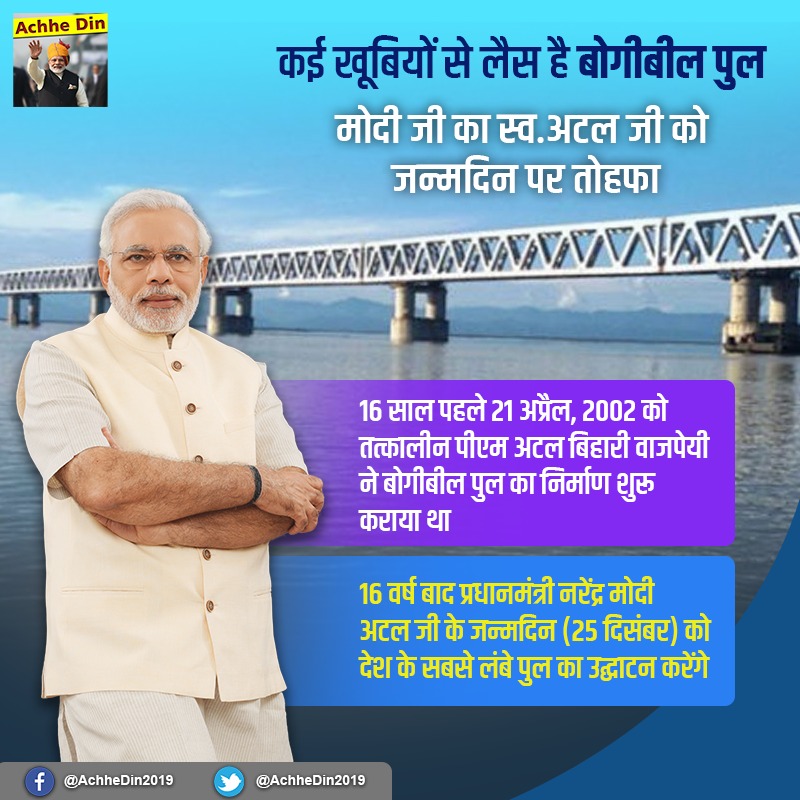 Once the present government came to power, development of NE became the singular focus and it took just 4 years for Bogibeel to see the light of the day. The bridge will help socio-economic development of people of Assam and Arunachal Pradesh and strengthen the security conditions in northeast.

Demand for a bridge over river Brahmaputra was voiced by people of the region way back in 1960s as people from Dhemaji , Jonai and North Lakhimpur districts had to undertake a day long journey to cross the Brahmaputra by boat to reach Dibrugarh for medical and educational needs. This long-standing demand is finally being met today. The Bogibeel Bridge is the culmination of a long cherished dream of the people of Assam and Arunachal Pradesh.

State of the art technology, machinery and engineering ingenuity in line with modern International Best Practices have been employed to construct the bridge. About 80,000 MT of high strength structural steel has been used for construction of the bridge. This will be India’s first and only fully welded large span steel concrete composite girder bridge. 1.25 km long train of girders weighing 17,000 MT pulled over a length of 5km for launching of the girders from south bank.

Bogibeel Bridge is the third bridge to be opened by Modi government over the Brahmaputra within two years. The strategically located bridge is very important from a security point of view in the wake of Chinese activities in Arunachal Pradesh. Another major bridge opened by Modi government in last year is Dhola Sadiya Bridge (also known as Bhupen Hazarika Bridge) which connects the state of Assam to Arunachal Pradesh. This bridge is built on Lohit River, a tributary of Brahmaputra and is located in the northern corner of Assam near the border of China. This 9.15 km long bridge happens to be longest bridge in the country and it will make movement on Brahmaputra River very easy.

The 3,848 km long river is prone to catastrophic flooding due to snow melting at the Himalayas, the river is an example of a braided river and is susceptible to channel migration and avulsion. The building of bridges on the Brahmaputra can be carried out on the Brahmaputra for only half a year as for the rest of the year, the flow of the river is too sharp to build anything. The difficulty in infrastructure development is the reason that despite covering most of the Assam, only three bridges were opened in the last seven decades.

GST compensation period for states to be extended up to 2025

Significance of KCR and Patnaik coming together