India has witnessed tremendous GDP growth in last few quarters. The economic growth has been consistent in last five quarters- 5.6 percent in first quarter of last fiscal year, 6.3 in second, 7 in third, 7.7 in fourth and 8.2 in first quarter of this fiscal year. Majority of the economists agree that the growth results for September quarter, (July, August and September) to be released on November 30, will also impart a positive result. The different forecasters have estimated a growth rate between 7.2-7.9 for the second quarter of this fiscal year. Given the unfavorable base effect, there is consensus that growth for this quarter will be less than that of the last quarter. However, India is set to maintain the pace and retain the tag of fastest growing major economy in the world, way ahead of China which grew at a rate of 6.5 percent in the September quarter. 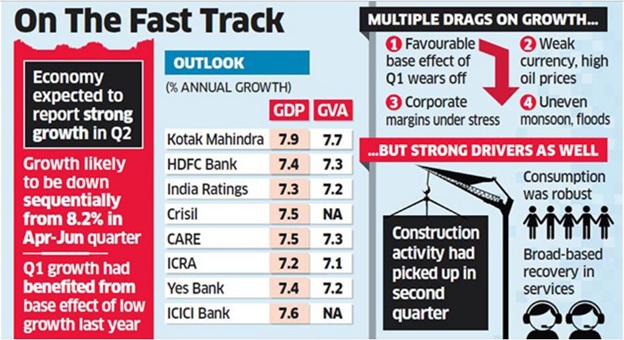 The media created ruckus on the rising oil prices and depreciation of rupee. The great economists on prime time TV debate shows predicted that this would disrupt the growth momentum of the country. But the predictions of genuine industry experts and reliable economists prove that there is no truth in rants of these ‘Know-it-all’ experts. The indicators which are helpful in the prediction of GDP growth have been positive in the last quarter. The construction activities picked up, consumption also increased with vehicle sales rising up by 37.82 percent in the first half of this fiscal year, and growth in the service sector has remained strong as well. 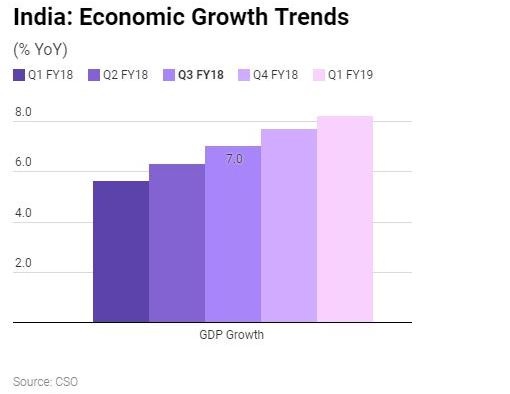 This year, the overall GDP growth was estimated to be 7.5 percent by the finance ministry. In the first quarter of this financial year, a GDP growth of 8.2 percent was achieved but the final prediction for the overall GDP remains unchanged. RBI, on the other hand, has estimated the GDP growth to be 7.4 percent in this fiscal year. “We expect mild moderation in sequential growth as the base effect that partially boosted economic activity in the first quarter is wearing off. However, the high-frequency indicators are pointing towards robust and stable growth in the second quarter,” said Upasna Bhardwaj, economist at Kotak Mahindra Bank.

The most encouraging part of the economic growth has been the rise in manufacturing sector. Industrial output grew by 5.1 percent in the first half of this fiscal year with a manufacturing expansion of 5.3 percent. As per the CARE ratings analysis, GDP growth will be driven by growth in Private Final Consumption Expenditure (PFCE) which is expected to grow to 13 percent from 10 percent last year.

“Notwithstanding our expectations of a muted agricultural growth, the announcement of revised minimum support prices, crop loan waivers, a pickup in construction activities in rural areas and staggered pay revision by state governments are likely to have supported consumption demand in the second quarter,” said Aditi Nayar, principal economist, ICRA. PFCE has been driver of economic growth in the country for long as India is weak on the exports front.

The reformatory steps by the Modi government like demonetization and GST, although were detrimental to the economy in their initial stages, proved to be highly beneficial in the long run as they simplified taxation and ease of doing business. It seems that the Modi government is progressing towards its vision of ‘double-digit’ economic growth of the country.