More than Rs 1.1 lakh crore recovered so far through IBC

India did not have a healthy corporate culture for decades. The Government used to spoon-feed selected established corporate houses through public sector bank loans and if businesses fail, public sector banks which run on taxpayer’s money had to bear losses. Several Indian companies were defaulting on their loans intensely because initially there was no law to dissolve their companies. The promoters were sure that the management of the company will not go out of their hands. They took loans from the government banks by bribing the employees with the intention of never returning the loan back. Since India brought the Insolvency and Bankruptcy Code, companies are now running after the banks to pay back their dues, because the IBC rules barred promoters of companies that are classified as non-performing assets (NPAs) from bidding for these companies.

Banks have recovered a total of 1.1 lakh crore from defaulters who were unwilling to pay earlier. If the defaulter goes through IBC process, the promoters will lose control and could not even bid for their own company. The fear to lose control over management is making the promoters pay loans. “It would be wrong to say that all the cases are withdrawn because the debtor pays up, but we are seeing that dues are cleared in a large number of cases once a case is filed, “said a senior government official. So far 977 cases have been filed in National Company Law Tribunal (NCLT) where lenders led by banks or operational creditors such as suppliers initiated the process. This fiscal year, public sector banks are aiming to recover 1.8 lakh crore which is two and half times more than the last fiscal year. 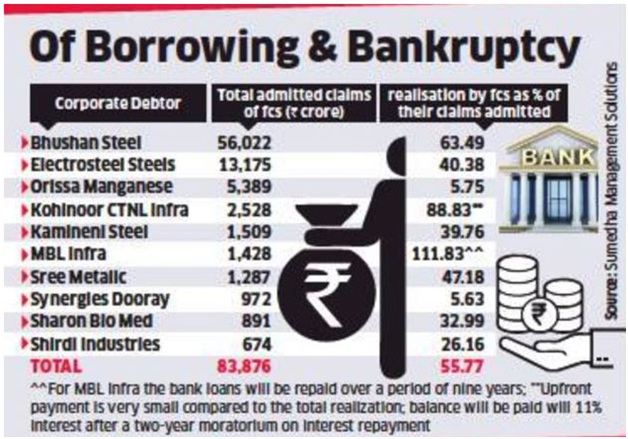 The cases admitted in NCLT are needed to be solved within 180-270 days. This puts pressure on companies and resolution board to do things in targeted time period. Time lag has been major problem of Indian judiciary for long and the government has solved this problem in corporate resolutions by putting a time constraint of 180 days with 90 days extension allowed. “Probably, India is the only country where the process has to be completed in a time-bound manner. In the coming months, situation will improve,” said Insolvency and Bankruptcy Board of India (IBBI) chairman MS Sahoo.

Under the IBC law, National Company Law Tribunal (NCLT) has approved Tata Steel’s bid to acquire the bankrupt Bhushan steel. This is the second biggest dissolution of stressed assets by NCLT under the newly adopted Insolvency and Bankruptcy (IBC) Code. Anil Agrawal led Vedanta Resources was the first successful bidder under IBC. It took over the ownership of the bankrupt Electrosteel Steels for an aggregate amount of Rs 1,805 crore (USD 275.7 million) and an additional fund of Rs 3,515 crore (USD 536.9 million) by way of debt. The Bhushan Steel and Electrosteel were both among the first twelve companies which were referred by RBI to National Company Law Tribunal for proceedings under the Insolvency and Bankruptcy Code, the other being Essar Steel, Alok Industries, Amtek Auto etc.

The gross NPAs of all the banks in the country amounted around Rs. 8,40,958 crores in December, led by industry loans and followed by services and agricultural sectors. India has the second largest share of bad debts in the world with 9.6% gross NPA. Only Italy is ahead of us with 16.4 % of NPA, while other major countries like the US, China, and Japan have 1.1, 1.7, and 1.3 % of NPA (non performing assets) respectively. Earlier, exit from the business was one of the most tedious things to do, thanks to socialist business laws which were the hallmark of previous governments. These laws helped in creating large non-performing assets, which was the largest problem faced by the Indian government and the Reserve Bank of India in the previous decades. But then after this amendment, in 2018 India ranked 100th where as in 2017 it ranked 130th in the Ease of Doing Business Index.