In a step which can be called masterstroke, Modi government has signed USD 75 billion currency swap agreement with Japan. PM Modi visited Japan where he met his Japanese counterpart Shinzo Abe and signed almost five deals, including agreements like the initiation of 2+2 talks and currency swap. Japan in past has also offered currency swap worth USD 3 billion in 2008 and it extended the swap limit to USD 35 billion in 2011 to USD 50 billion in 2013. The agreement will make the agreed amount at disposal whenever need arises for the country. “India and Japan agreed to enter into a bilateral swap arrangement of USD 75 billion. This swap arrangement would be 50% higher than our last swap agreement,” finance minister Arun Jaitley tweeted.

‘Currency swap’ is an agreement in which a country agrees to exchange its national currency from another or even the third and hence by this agreement between India and Japan, India will be able to acquire Yen (official currency of Japan) or dollar worth USD 75 billion in exchange for Indian Rupees. There are other countries like China, South Korea which also have currency swap agreement with other countries. China has swap agreements with Argentina, Brazil, Hong Kong, Indonesia, Malaysia, Russia, Singapore, South Korea, United Kingdom and many other countries. 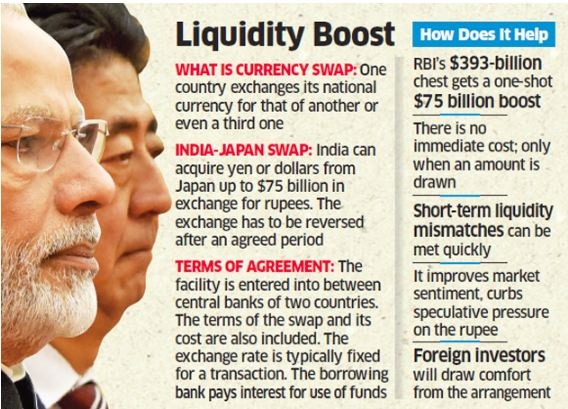 India’s swap currency agreement worth USD 75 billion will address the rise in Current Account Deficit (CAD) and fall in Rupee’s value. It seeks to boost the stand of Rupee in the global market and will be positive as far as overall foreign investor sentiment in Indian stock market is concerned. This agreement is among the largest currency swap agreements in the world.

“Bilateral swap arrangement with Japan for USD 75 billion is one of the largest swap arrangements in the world. Accepting Japanese request, India agreed to do away with requirement of mandatory hedging for infrastructure ECBs of 5 years or more minimum average maturity,” economic affairs secretary Subhash Chandra Garg tweeted.

Bilateral Swap arrangement with Japan for USD 75 billion is one of the largest Swap arrangement in the World. Accepting Japanese request, India agreed to do away with requirement of mandatory hedging for infrastructure ECBs of 5 years or more minimum average maturity.

India is facing a little macroeconomic instability due to the woes of developing markets and rise in the crude prices. The price of crude has almost doubled in last one year and this pushed Current Account Deficit (CAD) of India to a high level. The rupee is falling along with currencies of other developing countries of Asia. The currency swap agreement is masterstroke of Modi government as it seeks to bring back the macroeconomic stability. The relation between India and Japan are strongest ever under Modi government and it being well reciprocated by Japanese PM Shinzo Abe’s liking for India. PM Modi has been the prime mover of relations between the two countries. “We have agreed for a 2+2 dialogue between our Foreign Ministers & Defense Ministers. The aim of this is to further work towards world peace & stability”, said PM Modi during the joint press conference in Japan.

India and Japan have started their cooperation on economic and security front due to their mutual necessities. China appears a common adversary to both the countries which brings India and Japan closer. Both countries are trying to counter expansive policies of China of seeking to dominate the South China Sea and the Asian continent in the larger context. Chinese President Xi Jinping pushed his agenda to make China the  Asian hegemon through One Belt, One Road (OBOR) initiative. Other countries in Asia-Pacific region have obvious problems with this. Therefore, India in partnership with powerful Asia-Pacific countries like Japan, Australia and USA is making efforts to counter the Chinese designs.